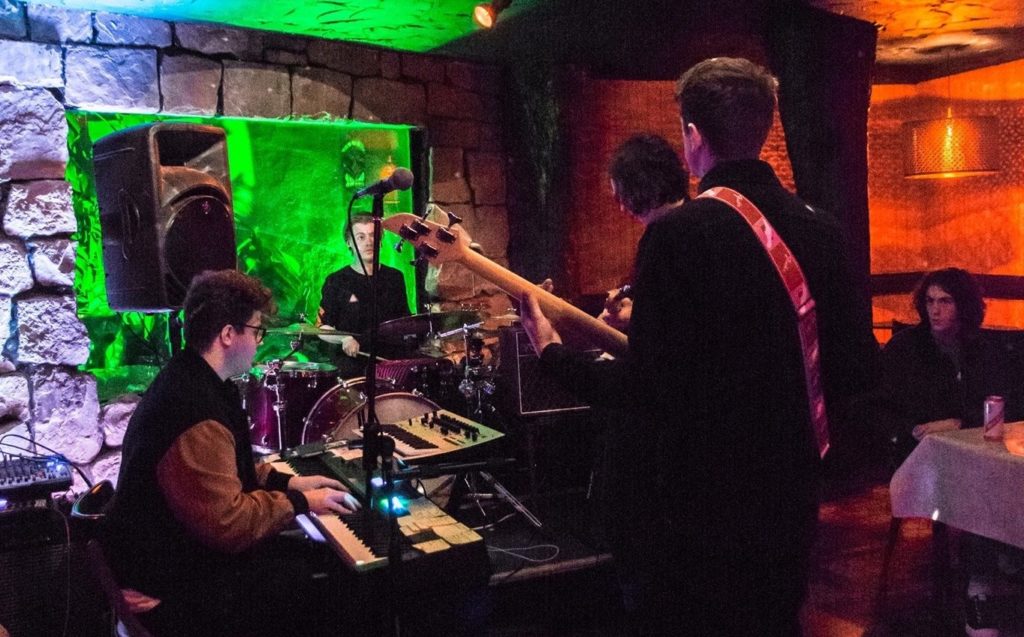 Creative Dundee has commissioned a series of Spotlight interviews from local writer Holly Girolami. Over the coming months, you can follow her work here as she explores the process of a variety of Dundee-based makers. The second interview in this series is with Liam James Cooney, a musician, producer, composer and mix/mastering engineer from Dundee.

Holly Girolami: What was the first instrument you ever learned how to play?

Liam James Cooney: Guitar. When I was 15, so quite late. I actually started learning bass on the guitar, with the intention of buying a bass. I got a bass for Christmas, and then within 3 months was back playing guitar because no one else could play guitar and everyone was playing bass!

HG: You’re very prominent in the local music scene, you’re not just in multiple bands, you also DJ and producer for other artists. How did you go from being in bands to becoming a producer?

LJC: Just never saying no. Always saying yes to every opportunity, because then you kind of become a jack of all trades, you’ve got your fingers in loads of pies, and it gives you the money as well as the experience. If I play bass in a band even for 6 months, I’ll get so much better at it, so then I can leave it behind but I’ll still have developed loads of skills and techniques. Working with other musicians as well is the main one. You always want to be the dumbest person in the room, rather than the smartest, that’s how you’re going to learn loads.

LJC: Something like Cinema Paradiso which is just a straight-up psych-rock band was always me and my close pals’ own thing, but it always felt very much like a democracy, with group decisions. Millhouse Collective I feel like is more mine, but it’s a true 50/50 split between me and Andrew (Rogers) who’s keys, and we write half the songs each and fix each other’s stuff. Because it works so well I feel happy about it – the collaboration is key, and that one feels the most rewarding, just because we have ideas we think will be great and everyone involved kind of follows what we do and it works out really well.

HG: So how did you make the jump from that side of things, from playing to producing?

LJC: When I was 18 I did a sound engineering course in Perth for a few months, but I quit because at that point I didn’t really want to be in education, I wasn’t enjoying it, and I didn’t enjoy traipsing back and forth to Perth on buses every day. I did learn a little about producing from it, and then I got a Macbook and just started making stuff myself. I basically just did lots and lots of really bad recordings with different people just to try and get to the point where we could kind of record stuff ourselves. The recording studio is just like an instrument, so you have to practice that and get fluent in how to record yourself, and when you’re recording someone else, how to get what they want out of it.

HG: With regards to production, what makes you want to work with an artist? What is it that would draw you to them?

LJC: People that I want to hang about with. People that I can see have really good ideas and don’t need me to fix or change anything, they just need support, and for someone to be into what they’re doing. Usually when recording bands, I want to work with someone who I feel like I could do the best work for. You want to get the closest to what their vision is, because that’s what you do when you’re recording yourself – you’re trying to make your own perfect ‘thing’ for you and iron out all the creases.

HG: So who are some local musicians that you’re excited about right now?

LJC: Drainpipe. I saw them at Conroy’s Basement the other week, and they were on in the middle of the night and the whole place just had so much energy. They’re a really raw sounding band, and there’s just something really exciting about going to see them. St Martiins are great and doing really well for themselves. Holy Snakes have got a really original sound, kind of garage-soul, like Motown tunes played by a garage band so it’s really rough around the edges in the best way.

HG: With the recent closures of venues like the Reading Rooms and Underworld Cafe, do you feel like it’s had a significant impact on the local music scene?

LJC: Yeah definitely. Dexters on Castle Street closed a while ago now, but that felt like a real nail in the coffin for a lot of local gigs because there was something about the gigs put on in there, it always had such good sound, it showed who the good bands were and who was needing more rehearsal, it was a really good place for bands to come up in. When they closed that venue, that’s when I started getting into dance music, because I didn’t really have anywhere else to go. I’m not really part of the metal scene but obviously Beat Generator has been going strong for years, but other venues just changed or disappeared – either lack of interest in gigs causes that, or it’s the other way around, those venues close and by default, people have to start going out more to clubs. It strips people of the motivation to be in bands in the first place. It closes rehearsal studios, it closes other businesses, they all have an impact and it all contributes.

HG: So what do you think needs to change?

LJC: There certainly needs to be better opportunities for young people, because the only reason me and 98% of the people I know started out playing gigs was because of places like The Shore, and The Mark Henderson Centre in the Hilltown. With monthly band nights, we’d have a chance to play gigs, that maybe weren’t of the highest quality, but it was giving a bunch of 16-year-olds the opportunity to give it their best shot. If there were 4 bands playing that night, and you’ve got to soundcheck, and then this band plays, and then you’ve got to be on stage, it teaches you the beginnings of professional conduct. Without these youth centres I don’t really know where the opportunities are for young people, because bands will have to wait until they’re 18 to play in bars and pubs, so they’re not really getting the chance to cut their teeth beforehand. It’s more of a step up than your local youth club, and they needed that entry-level space. The council needs to protect live music venues as well. In Glasgow you have DF concerts and Sub Club almost unionising to make their case to be protected.

HG: This last question was asked by James in our last interview – How does your work relate to the wider political context? Is any of your work politically motivated?

LJC: Politics is present in a sense, for example in Milhouse, because at rehearsals we’ll talk about current issues and politics, but I think it’s difficult to put that into your music. Whenever I try to write a song that’s politically motivated, it just feels really trite to me, I don’t think it’s my forte. I can talk about important issues, but actually writing about it is something I’ve always found really tough. I come to music to express a really personal point of view, I’m trying to relate personal experiences or write about something a friend or someone close to me is going through, rather than politics. Music is like writing a speech, as opposed to a discussion, so writing a song is like a statement, and it kind of feels like, ‘Well, who am I to say this?’ I really admire bands that can do that, but it’s definitely not my arena. I’m a personal writer rather than a third-person external writer.

HG: Do you have a question for our next guest?

LJC: What are the earliest memories you have of understanding that art is a tool for expression? What formative memories do you have of consciously experiencing art or creativity as a way to express yourself for the first time?