Fabric Day 3 – Re-Imagining Our Future Together 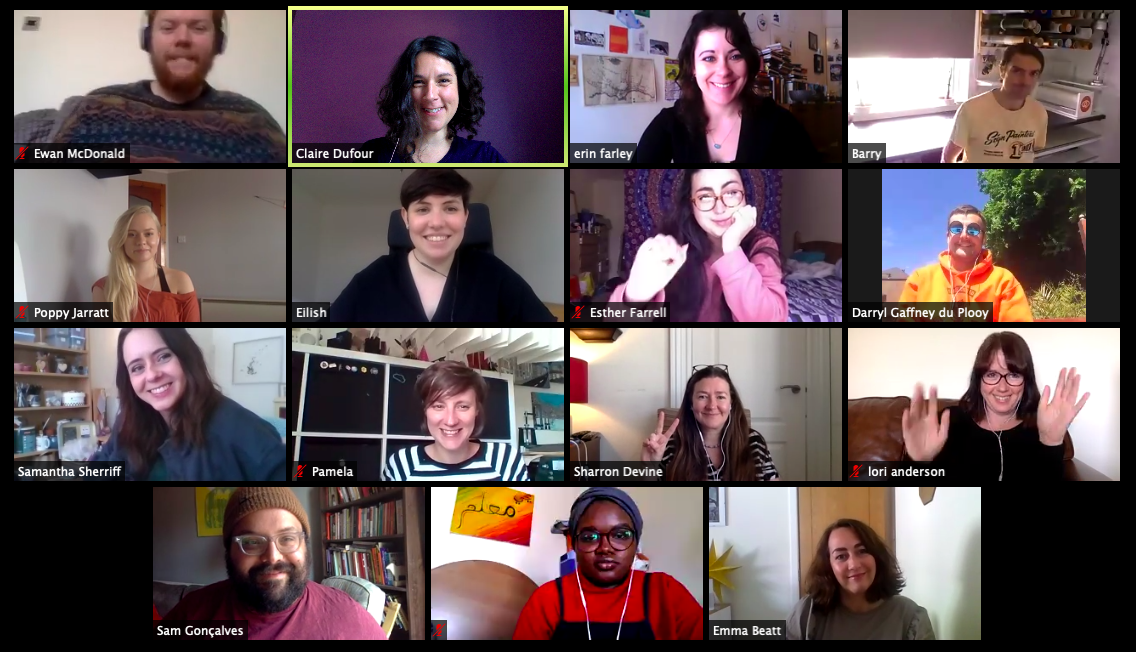 Fabric is a peer-to-peer development programme, run by Creative Dundee, which supports individuals who are passionate about Dundee and want to build on their creative leadership journey. Participant Poppy Jarratt wrote a piece about her reflections on Day 3 of the Fabric programme.

The night before our third Fabric session I was a bit all over the place. At that point, like most of us, I’d been feeling like this for about 58 days. I couldn’t, and still can’t, believe that we had our third Fabric session. How did that happen? How had we all been inside and separate for all of that time? It felt strange to know I’d be spending a third day with a group of people, when I’ve never met a lot of them face to face. I’m really excited to meet my peers in person, find out how tall they are, shake their hands (will we be able to do that again?), have some small talks, see the backs of people’s heads, ignore the fact that we’ve seen each other’s home décor but don’t know what any of us look like from the shoulders down.

What was getting me all over the place the night before our third session was that I’d been on furlough for weeks and have lost my freelance work so I wasn’t working at all. It felt like a bit of a charade to hear about creative leadership and take part in conversations when I didn’t feel like an active member of our creative sector. Personally, I think furlough should be renamed ‘indefinite period of existential crisis’ but I don’t think that’s quite as catchy in the government briefings.

Our theme for this session was Re-Imagining Our Future Together. This came as a relief. I’d spent most of my time between the second and third Fabric sessions questioning my future, wondering what direction to take and how to progress. It was pretty handy that the whole session was based around the questions I’d been torturing myself with, it would be nice to hear other people’s takes on them rather than hear mine on repeat again at 3am.

In the morning session, we heard from four guest speakers on what it means for cultural and creative organisations to play a civic role in and around Dundee, and how this can help us re-imagine our future together. First off, we heard from Annie Marrs, Lead Officer at UNESCO City of Design Dundee. You may have heard of Annie from being the name of the world’s favourite colour, getting involved in as much of Dundee’s creative events as is humanly possible and also, probably most notably, being my boss. Annie discussed the importance of inclusivity in civic spaces, reminding us that everybody thinks differently and deserves to have as much access to physical and non-physical civic spaces.

Next, we heard from Beth Bate, Director of Dundee Contemporary Arts. Beth discussed about the responsibility of cultural venues to play a civic role locally, to be for the citizens, and about the idea of hyper localism – communities looking into and relying on their local civic spaces rather than focusing on national or international ideals.

We then heard from Clare Cooper, Co-director of Cateran Ecomuseum who talked about the importance of considering mental health during the times we are currently living through, but also in terms of civic space. Clare directed us to The Collective Psychology Project which is an inquiry into how collective psychology and politics can be brought together in creative and innovative ways to re-imagine our future. Clare also said she was spending time ‘future-gazing’ at the moment while we’re in lockdown, which is an idea I enjoy.

Lastly, we heard from Liam Sinclair, Executive Director and Joint CEO of Dundee Rep and Scottish Dance Theatre. Liam talked about how they are currently looking into different ways of engagement with the local communities – like with their brand new project Where are you, Dundee? – and about the potential for the building to be a venue for the city, and how the talents and skills within it could support the city while they’re not able to produce shows.

“A civic space is a public space. It is a safe space which belongs to everyone and where everyone is welcome, and communities can gather together to agree and disagree in a constructive environment, tell the stories of the past and present that matter to them and imagine the future together.”

Throughout the day, we had a couple of surgeries, which aimed to offer participants the opportunity to talk through an idea or project, within small groups, and get feedback from their peers. In my first surgery, we heard about the idea of having a public building that houses arts, crafts, and design equipment where people can come and use when they don’t have access to those facilities themselves. We discussed the premises, funding, ways of testing the idea, and how space would be used.

In the next surgery, we heard from Ewan McDonald who told our breakout group about his idea for student and talent retention in Dundee. Ewan is a final year product design student at DJCAD and described how many people on his course think of Dundee as a stepping stone rather than a viable place to build a career. Ewan is working on creating a co-working space that tackles this issue by making a visible design studio, selling products, and creating job opportunities. Ewan also shared his idea of a discord server that had an ongoing video call where you can pop in and out of, to create the atmosphere of a co-working space even when we’re apart. For those of us who are missing the background noise of other people working, this would be amazing. (I’ve heard there are ‘café noise’ playlists on YouTube, I think I’d prefer Ewan’s idea so there could be actual, optional chat though!)

Our final task of the day was to imagine our own ideal civic spaces. We were again transported into digital breakout rooms for discussion. Here are a few ideas we’ve discussed within my group – our ideal civic space would have no governing body but user responsibility, no doors to close or thresholds to cross, an outdoor space, greenery, and soft edges, large outdoor public screens, free wifi access and a blend of physical and digital uses… it will be a space that allows flexible use, with options for different engagement levels, as well as being a place that is ‘pandemic-proof’.

My group decided that I would report back to the rest of the Fabric group. I’m not sure why it was a 100% consensus that I would be the one to feedback, maybe it was my comeuppance for generally staying quiet during the larger group discussions! I fed back and, as always when I speak to a large group of people on a video call who are all on mute, I found it hard to keep producing words because of the lack of direct eye contact and the encouraging ‘yes’ and ‘mmm’ noises we generally make in conversation. But I can’t help thinking that the civic spaces that were described by each of the nominated feed-backers were similar and all sounded idyllic, so why don’t they exist already?

As with each of the sessions, I went away with a lot to think about and needed a good few strolls around the block on my permitted daily exercise outings before I could process the discussions. Hearing from current cultural leaders in the city is reassuring, and to see how our city has adapted in the face of the COVID crisis, how it is planning to rebuild itself and how our cultural leaders are working to ensure our recovery makes us more inclusive, safer, more adaptable, and more resilient.

What I heard from our group was that we are missing the togetherness of the cultural sector but, even apart, we are coming up with ideas to break down barriers and create community spaces that are physical and digital which means more accessible, easier to engage with and more inclusive of our wider communities. If the people on this year’s virtual Fabric programme go on to practice their creative leadership, I am excited for the idyllic public spaces, co-working options, and access to facilities that are in store!