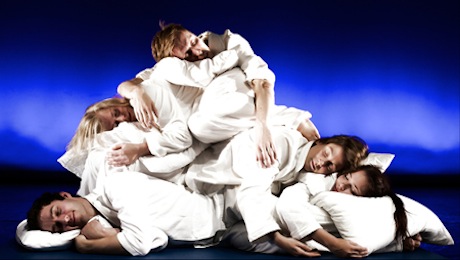 Where do you go in your dreams? Scottish Dance Theatre’s new work for children What on Earth!? takes you on a nocturnal journey around planet earth, to places only your dreams can take you!

Premiering at the Rep on 11 & 12 April 2012 as part of Dundee Rep’s Children’s Festival, before going on tour, this production is aimed at children aged 5–11 but as it’s pitched for all the family, we are looking forward to heading along.

With a diverse soundtrack that includes The Beatles, Bob Marley, Yann Tiersen and Handel, SDT will take you into a world of dreams about planet earth, where friendships are made and battles are won and lost.

SDT is also running a series of dance workshops for children aged 5-11 linked to the performances, giving children a chance to learn some new dance moves and make up their own, and also giving them an exclusive introduction to the show. To find out more visit www.scottishdancetheatre.com