The annual delight, Nilk, is back on Saturday 14 September and features a range of live performances, music and art. This small, independent and perfectly formed micro-festival is heightened by the beautiful botanics backdrop. Roll on Nilk…

The main stage headliners, deep in the botanics garden, are Golden Teacher, who have just released their second 12″ on Glasgow’s Optimo Music label, who are doing really well and gigging far and wide. Also playing are The Guild of Calamitous Intent, “collectively the tallest DJ duo in Scotland since 1999”, and theapplesofenergy, who will be playing a blissful live ambient set earlier in the day.

Rusty Hip Collective will be there, doing what they do best, showcasing local music talent, with their curated line-up including: The Onion Club, Kings and Cowards, The Strangers Almanac, Little Anchors, esperi, Blood Indians, The Won Over, The Sparrowhawk orKestrel, Shoogar and The Shithawks. They are also hosting a trail by foot which starts at Grouchos at 1pm. Join them to make your way through the city centre and all the way up to the Botanics, with performances on route. Limited £5 tickets for Nilk are available on this trail too.

The Botanics Glasshouse will be curated by Ickle Film Fest and you can read more about this year’s Fest, in the feature here. And a mention must be made to the awesome festival artwork which was designed by Grampian Mountains.

Then there’s more homegrown heroes, including Samoyed & Stefan Blomeier (see last year’s performance in video below), the latter of which is playing live with ‘Claire’. To round the main stage off they have Il Discotto’s Italo Gelateria (off Zazou fame) playing, with ice cream served throughout his set. Nilk DJs will be lending their DJ skills in-between it all! There’s lots more going on, with special artist commissions and visual delicacies once the sun goes down… 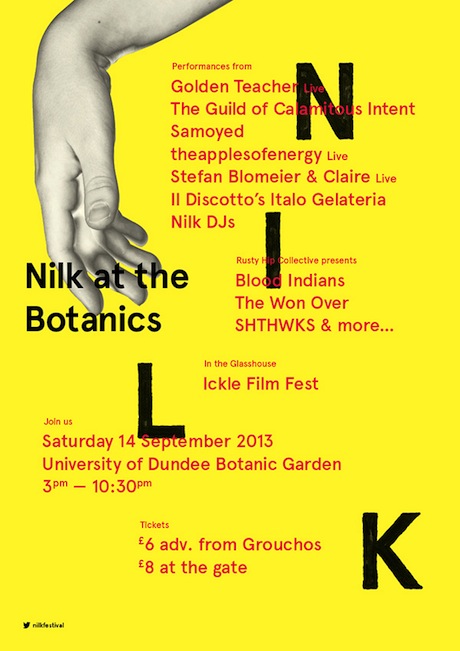