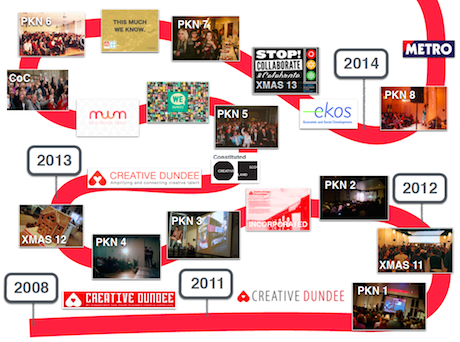 Creative Dundee connects creative talent with the city’s wide ranging opportunities, to ensure people can base, grow and sustain their practice, in and around Dundee. Our online open platform amplifies the city’s creative pulse.

Dundee is a city with culture and creativity very much central to its future. The truth is that it’s always had an incredibly strong and vibrant creative scene. That’s why in 2008 before any of the current developments were on the cards, we set up Creative Dundee.

For four and a half years, Creative Dundee was a blog, an intensive ‘hobby’, run in our spare time. Coverage was very patchy, but the aim was to show that there was more to the city than the only visible creative industry at the time, video games. It was only when we decided to run an event in 2011, by bringing the global event, Pecha Kucha Nights to the city, that things literally began to connect.

Having worked on creative support programmes in the past, I know how difficult it can be to get your name/product/service/practice out there; how tough it is to find studio space; the challenges of staying motivated; the battle to keep on top things outside of your own practice; and how vital peer support is for all of this, and much more. Dundee might be a city of great transformation, but all in the garden is understandably not yet rosy. 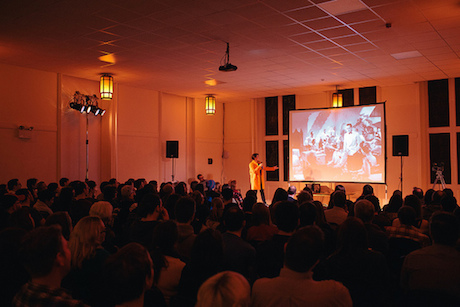 The glue that brings creatives together

CD’s strength was then, and still is, our ability to connect people and projects by making them visible and by bringing all creative disciplines together. The creative industries, arts and cultural sector are often weirdly separated, even though they are have a critical interdependent relationship. Crucially we also don’t only speak to each other, and instead reach out beyond, to people who don’t work in the sector but see the value it brings.

Our community say that we’ve become the glue and a fairly integral part of the creative guts of the city. We act as a digital window for the city’s creativity highlighting the work of the grassroots and national agencies online, which has traffic from all over the world visiting. We run events to connect and inspire, such as Pecha Kucha Nights, which have regular audiences of 300 people attending, with an extra 10,000 viewing videos afterwards. And we crowdsourced close to 4,000 ideas last year from citizens on the city’s future, through We Dundee.

CD constituted as a not-for-profit last year and received some funding from Creative Scotland. We generate some income through events and the provision of external services – which in turn generates paid opportunities for creatives and offers a small but important way of commissioning local talent. Like everyone, we have plans to do more income generation, which has to be carefully balanced with what we are trying to achieve for the city. 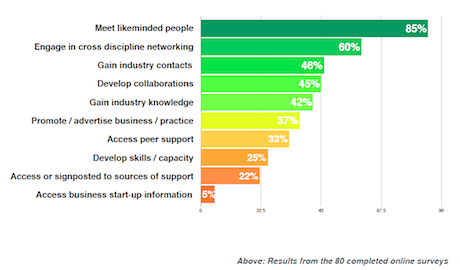 Reasons for engaging with CD? Taken from the Ekos Creative City Networks review

The highlights have been working in partnership with a huge number of organisations – local and national, festivals, citizens, the City of Culture bid team, and most critically the grassroots innovators, creatives and collectives, without whom Creative Dundee just wouldn’t exist.

The Ekos review ‘Mapping Three City Networks’ was also useful for affirmation, and cited Creative Dundee as: an influential catalyst for the increase in the profile of Dundee; bridging the gap between the community and the public sector; playing a role in the retention of talent within the city – more people choosing to remain, or move to Dundee to access opportunities; and enabling community empowerment and a sense of pride in the city. 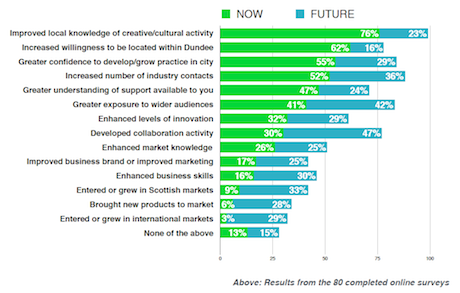 Being part of the Creative Dundee community, now and in the future has… Taken from the Ekos Creative City Networks review

People are often surprised that CD is not a larger organisation, I now work on Creative Dundee around 2.5 days a week (ish). I love it, but things are getting increasingly challenging – as the city develops, demand for CD’s time increases; and minimal short term funding means we can’t always plan for the long term.

Creative Dundee has always been powered by community need, it’s this that keeps us going. We’ve now got nearly 7 years worth of assets on the site and have some great projects and partnerships on the horizon, focused on: developing collaborations and innovation skills; becoming a go-to virtual destination for locals and visitors alike; and being the often missing link between strategy and action.

We aspire to be more like Creative Edinburgh, who deliver upon a number of strategic objectives for the city, on behalf of their Local Authority. This might take time for us all, as this great piece by Bernd Fesel, (Chair of the European Creative Business Network) explains that most cities around the world don’t yet see the potential of the creative industries or the cultural sector as powerful drivers for social or economic innovation.

As Dundee explores and shapes its future, we believe that creativity and innovation will be core, and by keeping things visible and connected, then it will become an ever greater place to live and to visit.

For me, Kent Larson, MIT’s urban studies director summed this up, talking about city innovation at the recent Edinburgh International Culture Summit, Kent said, “We have been asking what enables innovative, entrepreneurial and high-performance cities. We are exploring a formula, although we have not yet solved it, which says that density plus diversity plus proximity, if you get it right, equals innovation, quality of life and sustainability, as well as a lot of other things such as equity.”

Given Dundee’s size, natural assets and rich creative resources, could we be the ultimate smart city? We certainly think so.