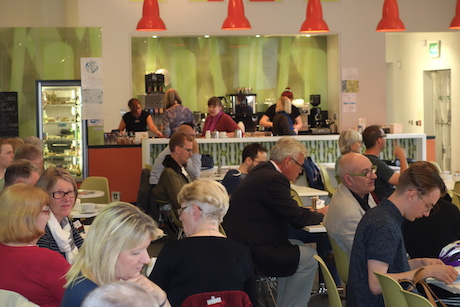 We were recently invited to give a talk, Shaping our Creative City, at Dundee Arts Cafe, the regular events programme which encourages artists and scientists to discuss their work in public. We thought it would be worth sharing it, as this topic really does involve everyone.

We started off by considering where the city is now, particularly touching on its cultural scene and the passion by citizens to make sure Dundee ‘gets it right’ in terms of the city’s future developments and direction, something which was displayed in spades last year.

The big issues which Creative Dundee feels are really important for the city going forward, are to:

By doing this and keeping everything visible and connected (a key part of what we do), we think this will ensure creative talent is confident to either stay, or locate in the city; and that visitors will stay in and around the city for longer. 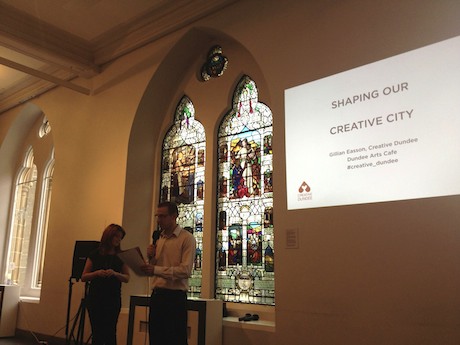 We looked at a four cities globally using their creative strengths to develop their cities and/or redefine their cities. Disclaimer, we’re not suggesting that Dundee should go down any of these paths, they are simply for use to consider our own strengths. These include:

Bristol, UK– with its close proximity to the capital (similar distance, Dundee to Edinburgh), it has a high number of established creative/digital industries and is now the top destination in the UK for high-tech digital firms outside of London.

Bristol has benefited from a partnership between its two Universities and the Watershed – the Pervasive Media Studio, which explores design and creative technologies; and the best thing? It does it in public, in the city centre. The Playable City project engages citizens in tech in public spaces each September (their 2 day conference will be ace as well). Last December we had Playable City producer, Verity McIntosh speak about this very topic at our Christmas event, you can watch this talk here.

Bristol Council and BBC have also teamed up to offer a new digital storytelling course, aimed at young people aged 19 – 25. They’re taught how to write, produce and edit a short film with a theme of what job they would like to do and why; which is used as a digital CV.

Chattanooga, US – it has a fairly similar population to Dundee of 167k; is a post-industrial manufacturing city; and has faced significant urban blight and poverty (in Dundee more than a quarter of children live below the poverty line).

They are now known as the Gig City due to their incredible internet speed of 1 gigabit per second (50 times higher than US average), set up by the community-owned electric utility company and are completely freaking out the private telecoms sector.

They have a massive boom in growth of tech start-ups moving to the city to benefit from the connectivity (they are also selling themselves on being a leader of digital fabrication/innovation); but they are also taking digital inclusion of all citizens seriously – ensuring that children get access and online through digital skills programmes.

How did Chattanooga get to this point? It invested in culture. As the great report, Searching for Necessity, points out, ‘leaders in the community recognised the potential in the city’s audacious citizens’. The CreateHere project was a 5 year programme that ‘punched cultural and economic life back into the city by supporting the arts and creative enterprises – or, more specifically, the people behind them’. It included a leadership and fellowship programme which had great principles, some of which included: Cities should be places where everyone has the opportunity to pursue happiness; imagination in tied to innovation; retention of talent precedes attraction of talent; people are the city’s greatest assets; and greatness is synonymous with boldness.

San Sebastian, Spain – Similar in size, location and ambition to Dundee (in our view) than the nearby and more often compared Bilbao. It’s got a well connected cultural, leisure and tourism offer and is European Capital of Culture 2016. You can read all about it and what our own ‘Dundee Effect’ might be in our previous feature here.

Helsinki, Finland – A well known design capital, was World Design Capital in 2012 with significant public/private/civic design and enterprise endeavours across the city; currently has a global design competition to design a Guggenheim museum; and wants to make car ownership pointless by 2025, by using tech to facilitate easy/better/cheap travel. Read more about Helsinki in our previous feature here.

Then we looked at some of the grass-roots creative and innovative initiatives happening in Dundee which are an important part of a much bigger cultural city ecosystem. A couple of very diverse projects are included in more detail below: 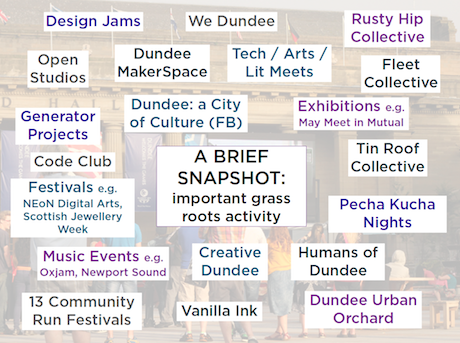 Play to Cure: Genes in Space by Guerrilla Tea with Cancer Research UK – Dundee based video games company, Guerrilla Tea have created a free game which helps cancer research by spotting patterns in DNA data, which would take scientists months/years to analyse by eye. Over 1.5 million classifications have been made so far – simply by navigating a ship through space. These ‘games for good’ have a huge potential in future – Dundee is particularly well placed to lead this charge.

Dundee Urban Orchard – A city-wide project supporting communities to plant and care for orchards; they also offer expertise on biodiversity, connecting to green spaces and food sustainability. So far they’ve worked with over 25 communities across the city from libraries, to schools, to organisations.

Creative Dundee believes that by making things visible and connecting up the dots between individuals and organisations, is half the battle to driving the future of our city. That’s why we have been building a Creative Resources Map – this work was initially started at a group session organised by Fleet Collective and led by John Thackra. We’ve built upon it and although it’s by no way complete, it is hopefully a solid start.

You can find the pdf of the below image here. 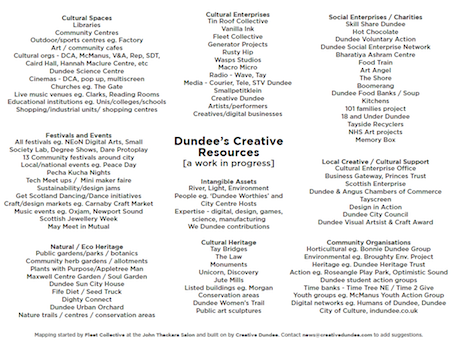 Cities are great platforms for culture, as political theorist Benjamin Barber said in his great talk (available here) at the recent International Cultural Summit and referenced Javier Nieto, the president of the Institute for Advanced Architecture of Catalonia,

Nieto had said, “More than ever before the city will be culture. A space of freedom and contact, a space for creation and exchange … A quality public space, at the human scale, with efficient energy-sustainable systems of mobility where people are the essential core in what today defines the value of a city.”

Creative Dundee is an open platform. We exist simply because of everything else which happens in the city and we think there is a huge opportunity for Dundee and its citizens to direct the shape of the city.

That’s why we want to hear more of your debate and ideas in relation to culture, the city and its future. As ever, we invite you to comment or write a feature from your perspective on the things which matter to you and your city.

You can watch the video of the talk from Dundee Arts Cafe here.

Colin Anderson of Denki’s feature on The Future for Culture in Scotland.

Creative Dundee on Connecting the City.