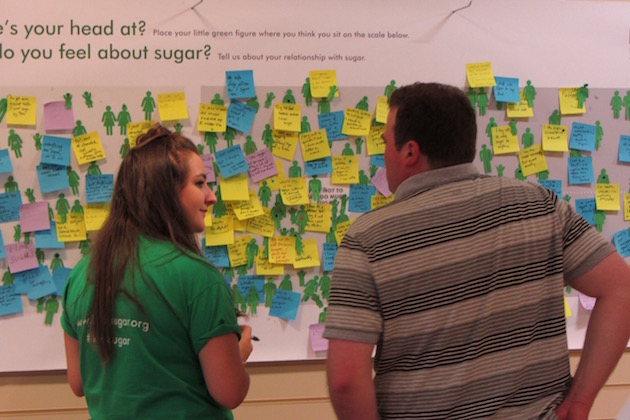 Know Sugar was a health education intervention in the Wellgate Centre in the form of a pop up shop, developed by Service Design company Snook, funded by Design in Action, and including some DJCAD design students. A project that demonstrates how the two cities can ‘come together’.

If you want to know what living in a divided city feels like, there’s no need to travel back in time to Berlin under communism or Londonderry during the troubles. Just stay where you are. Dundee in 2015 is as divided as they come. But the creative sector could take a lead in building a unified, confident and sustainable Dundee.

The annual Cities Outlook report compares the performance of 64 UK cities across a range of areas including business and innovation, industrial structure, employment and skills. Overall it provides not only a useful snapshot of how cities are performing, but some sense of how that performance has shifted in recent years.

The latest Cities Outlook 2015 edition kicks off with this comment by Bristol Mayor George Ferguson: “Whether we like the conclusions that are reached in Cities Outlook or not – we all take notice! The reports increases our understanding of what we need to do to unlock our cities’ potential and to make us more resilient to economic change.” So how does the 2015 report help us to unlock Dundee’s potential and make us more resilient to change?

At first sight some performance measures for the city are, frankly, grim. These include the state of business, the heavy reliance on public sector employment and rising inequality. Our business stock is the second lowest in the UK, the business start up rate places us eighth lowest and our employment rate is the absolute lowest. It is ranked as 6th worst in terms of those claiming Job Seeker’s Allowance. Other problems include its stubbornly slow rate of population growth and second lowest in building new homes.

But are we not an innovative city in which intellectual property has replaced the jute and jam? The one metric used in the report to assess this is the number of patents granted. The report acknowledges that this is an imperfect measure but adds “while patents do not cover all forms of innovation, they do act as a good proxy”. Out of our 64 cities, Dundee is tucked in behind Ipswich and just ahead of Wigan at number 58.

Before you decide to sell up and move to Burnley (running ahead of us in a number of these ‘league tables’), another set of tables in the report presents what appears to be a very different picture.

Skill levels and income growth both put Dundee in the top 10. In terms of those with high level qualifications, the population of Dundee is up there with Oxford, London, York and the other Scottish cities. And when you begin to dig into the source data that is drawn upon but not published directly in the report, there are some further surprises. Dundee is ranked as 17th highest for average earnings placing it in the same league as Bristol, Southampton, Cardiff and Gloucester.

This strengthens my view that Dundee is clearly two cities in one. A creative knowledge-based city with high quality public health and public education as its key industries and employers, coexisting alongside a relatively low skill city with poor levels of employment, a high reliance on benefits and questionable prospects for its future.

This is reinforced by the data on inequality which shows that Dundee has the sixth highest level of inequality. It may be in the top 10 for high level qualifications, but it is also in the top 20 for the numbers of people with no formal qualifications.

So, two cities in one – and both highly dependent on the public purse. The ratio of private to public sector employment in Dundee is the fourth lowest in the UK. A city so dependent on the taxpayer for jobs and welfare is not sustainable.

For the creative sector this all presents us with an array of opportunities and challenges. The greatest opportunity is to build on the strengths that we already have to encourage and support more creative enterprise in Dundee. The city was recently selected as an EU case study demonstrating best practice in cultural/creative industries support. Of the 70 European cities selected, only 5 are in the UK, and Dundee is the only Scottish city. Hot on the heels of the UNESCO City of Design designation, this demonstrates the recognition that the city is fast gaining internationally. But a world reputation for our creative strengths doesn’t get around the fact that most creative enterprises are actually rather fragile.

It is therefore essential that a new accommodation and relationship is reached between the “big beasts” of the local economy and the smaller, more fragile creative sector. Simply providing the professional development and support that the sector needs would be a start. Going beyond this, we have to find new ways of infusing the large public sector employers who tower over the economic landscape with creative enterprise, of opening them up to new ways of working and thinking, together with developing more open and flexible relationships with the SMEs and micro enterprises that are beginning to flourish in the city. These will only flourish and indeed thrive if these large organisations give them space and opportunity to do so. The flexible, smart and nimble creative sector could increasingly be used as the R&D labs for the universities, NHS and City Council.

It is not that the public sector is incapable of being creative or innovative, but that there are well recognised institutional barriers that stifle innovation. NESTA’s Geoff Mulgan has written very supportively of innovation in the public sector, but recognises that in comparison with private enterprise, there is a pronounced gap: “In the public sector there are few comparable models for innovation. It is rare for an organisation to be able to give a coherent account of how they innovate. There are few mature roles; budgeting methods; or assessment methods. Instead new ways of doing things tend to be created in a much more arbitrary fashion. This leads to:

• The top–down imposition of unproven new ideas, or
• Creative but disorganised local innovation, or
• Reliance on quasi–markets without the R&D necessary for radical innovation.” 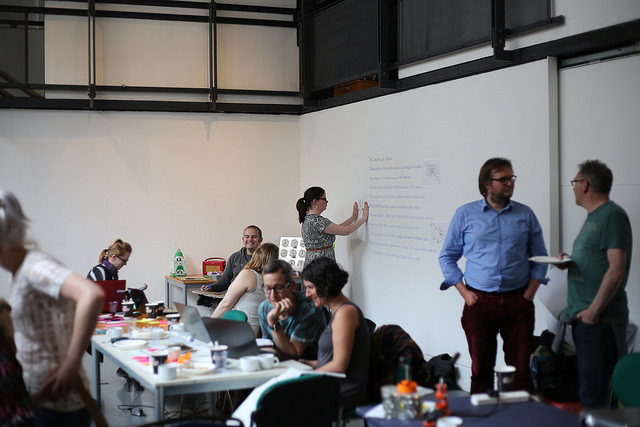 The Small Society Lab explores the development and understanding of the small city of the future. It is a partnership between Dundee Contemporary Arts, the University of Dundee and Creative Dundee. This year’s Lab connected with citizens, designers and makers in Mexico City to remix and celebrate the two cultures.

Dundee Touchpoint is one small example of how we can encourage collaboration across the city’s various sectors. This city-wide network focuses on service design and involves design professionals, retailers, medical practitioners, educators, council employees, community workers, students and the Scottish government. Its latest event pulled on this diverse expertise to design an innovation hub for Ninewells Hospital. The initiative is founded on the principle that what the city needs are not top-level events or corporate mission statements on change, but grassroots experiments that encourage collaborative design around real-world problems.

Creative Dundee is itself a vital force in this regard. It seeks to balance work amplifying and connecting creative industries/cultural talent, with some projects which engage people who don’t work in this area in creativity and the city’s future (We Dundee, Screen in the Square, Small Society Lab, etc), through open innovation and collaborative approaches. One of the most valuable contributions that Creative Dundee has made is to create an inclusive outward-looking community of creative practitioners and others in the city that drives forward a vision of change for Dundee.

What the Cities Outlook report highlights is the urgent need for Dundee to embrace a new inclusive spirit and culture of enterprise, perhaps learning from the experience of Creative Dundee. We are a City of Design, so let design be the engine of that change, and let us encourage and support real bottom-up design-led enterprise in all parts of the city, with a renewed emphasis on social enterprise.

As a design-led creative city, we could be experimenting and piloting new ideas, and the creative sector is perhaps better equipped to do that than the public sector giants are – so a new relationship and partnership is needed between them.

And where are these new ideas and initiatives going to come from? From us. In partnership with others in the city clearly, but the creative sector should take a lead. It is time to design and create a new Dundee – one city, to replace the divided city that it has become.

Mike Press is Professor of Design Policy at DJCAD, University of Dundee and is a partner in the Open Change consultancy. He tweets as @mikepress and blogs at https://mikepress.wordpress.com