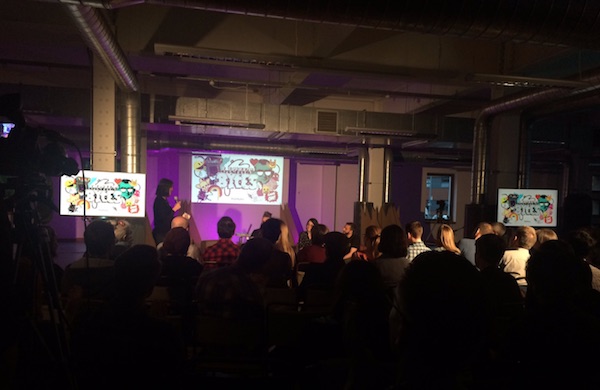 UPDATE: Find out more about the Curiosity Awardees here.

On this page you can watch the live stream from the Light Bytes event night in Dundee, find out more about the panelists and read more about the Curiosity Awards of £1,000, with the deadline of 30 June 2016.

Meet the Demoers: Various demos from the event floor – 53:50

Following the Light Bytes event series, there is an open call for Curiosity Awards proposals of £1,000. We are looking to support six collaborative prototype projects which explore creative technologies by cultural organisations and technologists.

The application deadline is Thursday 30 June 2016 at 5pm.

Find out more about the Curiosity Awards: bit.ly/lightbytes

The Light Bytes events series is open to artists, cultural organisations, designers, creative businesses and creative technologists across Scotland – anyone who is interested in bringing culture and technology closer together. The Dundee event took place on Thursday 2 June from 6.30pm – 9.30pm.

Light Bytes will enable Scotland’s makers, coders, creative technologists and digital producers to connect with the cultural sector in an innovative and responsive way, with the potential for future peer leadership opportunities and funded pilot projects in Creative Scotland’s proposed second phase of the project.

At the events, there was an open call for prototype development funding launched. These Curiosity Awards of up to £1,000 each will support the development of six project ideas into small prototypes. 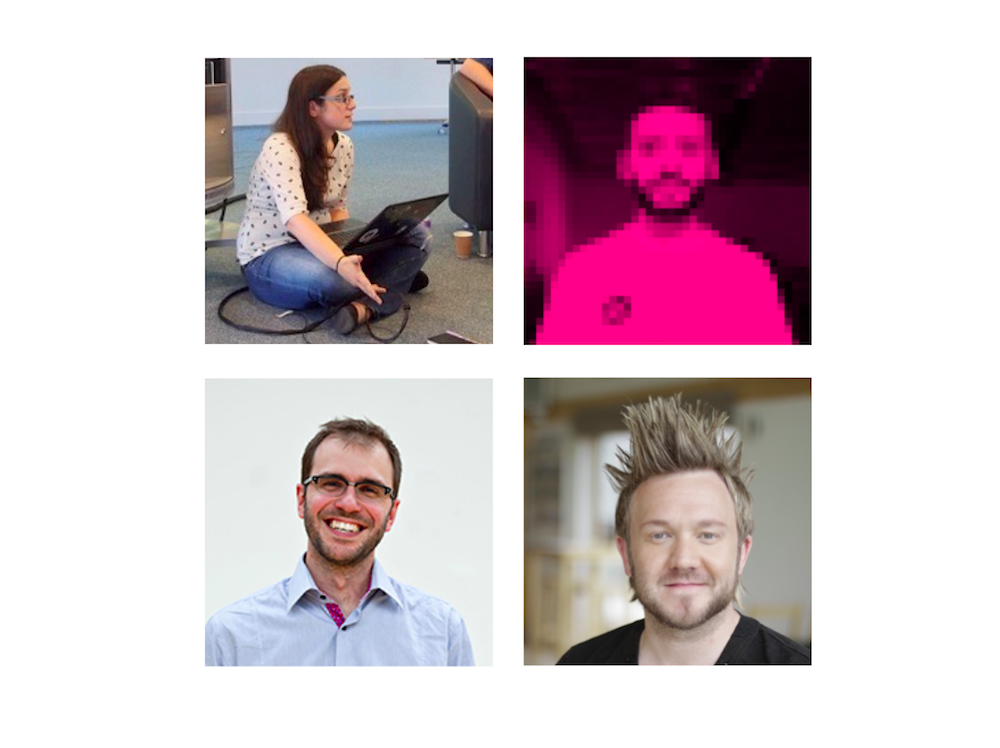 Yann is a musician, sound designer, and artist whose work focuses on sound, music, physical interaction, games, and instruments. Recent projects include residencies at the Smithsonian Air and Space Museum, the Floating Cinema, and Timespan. He has performed at The Roundhouse London, Mutek Montreal, Melbourne Recital Hall, Liquid Rooms Tokyo, Köln Philharmonie, and more. In December 2015 he received a British Composer Award for Sonic Art for his 2014 Edinburgh Art Festival work “Currents”. He is founder of Lucky Frame, a company specialising in fun and intuitive digital creations. @yannseznec

Malath Abbas is an independent game designer, artist and producer working on experimental and meaningful games. Since co-founding the award winning studio Quartic Llama, Malath is establishing Scotland’s first game collective and co-working space in order to support a community of independent game makers. His current work includes Killbox, an online game and interactive installation that critically explores the nature of drone warfare, its complexities and consequences. Visit: www.malathabbas.com + @maltron3D

Lynn is a gamer at heart, and happens to be educator and animator by day.  She is the Programme Leader for BA (Hons) Computer Arts at Abertay University and is creatively active, producing interactive experiences and performances that aim to bring people together and make people feel awkward, through interactive technology, digital media, the body and space. Her practice leads her research activity as part of Abertay Game Lab in the School of Arts, Media and Computer Games, where she is currently undertaking a PhD.  While animation and interactive design is her creative passion, Lynn’s real focus is to support (and hopefully inspire) her students to help them to develop the skills and gumption needed to achieve their goals for the future. @toadrick

Thomas is artistic director of Shaper Caper, based in Dundee. He graduated from London Contemporary Dance School with a BA (Hons) degree and has won many awards and commissions for his work including the prestigious Bonnie Bird New Choreography Award and the Robin Howard Foundation Commission. In 2015, he was appointed as the first ever BBC Radio 2 Artist in Residence in association with The Space. He has also been short-listed for the Peter Darrell award in 2003 and The Place Prize in both 2006 & 2008.   Thomas was Choreographer in Residence at The Space, Dundee throughout 2008 and Artist in Residence at The Byre Theatre, St Andrews.  In 2013, he was awarded the Creative Scotland fellowship on the Clore Leadership Programme.  During his fellowship he undertook a secondment at The Roundhouse, London and V&A Dundee and was mentored by Farooq Chaudhry, Producer at Akram Khan Company and English National Ballet. Visit: www.shapercaper.com + @shapercaper

Demos at Light Bytes include:

An online game and interactive installation that critically explores the nature of drone warfare, its complexities and consequences. It is an experience which explores the use of technology to transform and extend political and military power, and the abstraction of killing through virtualisation. www.killbox.info

Slurpp has worked on a whole range of different projects for a bunch of amazing clients. Including branding, illustration, user experience (UX), user interface (UI), apps, wearables, websites and more; they have worked with The Chemical Brothers, Channel 4, Chvrches, Tennent’ and more. www.madebyslurpp.com

An award winning independent games developer. They work with companies, charities and organisations across the world to develop games for a range of platforms. They developed Play to Cure, a pioneering way of helping these scientists in their mission to beat cancer sooner via this world first mobile game, this was in association with Cancer Research UK. www.guerillatea.com

Working out of a shared workspace, surrounded by talented people from multiple creative disciplines, our tiny “micro” company produces original works and work for hire in the video game space. Currently they are developing their first title “Remote” with the aim of bringing it to a variety of video game digital marketplaces. www.icebeamgames.com

A BAFTA nominated independent games studio. With a focus on games that do more than solely entertain, their titles teach concepts and educate, tackling unexplored and difficult topics through the medium of games. Their latest release is Glitchspace, a first-person programming game that tasks players with reprogramming the world around them to solve puzzles. www.spacebudgie.com

NEoN (North East of North) aims to advance the understanding and accessibility of digital and technology driven art forms and to encourage high quality within the production of this medium. NEoN has organised exhibitions, workshops, talks, conferences, live performances and public discussions and established itself as a platform to showcase national and international digital art forms. NEoN Digital Arts Festival is Scotland’s only digital arts festival which runs every November. www.northeastofnorth.com

Raspi Kidd aims to teach parents and children alike about the raspberry pi and what they can do with it. It’s time to get the raspberry pi out of the cupboard and start playing!  www.raspikidd.com + @RaspiKidd

Since 2014, Hyper Luminal Games has established itself as a self-funded independent games studio and has since gained valuable experience as a work-for-hire developer. They currently develop and maintain educational games for schools and businesses across Scotland and have grown to become a recognised brand in gamification products. By completing 13 projects in less than two years Hyper Luminal Games are quickly becoming a prolific force in the work-for-hire software sector. www.hyperluminalgames.com + @HyperLuminalUK

Dundee MakerSpace is a community workshop and is about being part of the global drive to encourage everyone to be creative. We are an open organisation that aims to bring the global drive to Dundee, creating an open and creative space for anyone to learn and to collaborate on exciting projects. www.dundeemakerspace.co.uk + @dundeemakespace

‘EVE’ is an interactive dance experience exploring embodiment, movement and space through experimentation with re-active animations and video. Participants are invited to explore, interpret and mix the systems’ effects to create their own personal unique dance experiences. This system forms part of on-going collaboration between Dr. Corinne Jola and Lynn Parker from Abertay University, exploring bridges between the arts, interactivity and science. www.CoCoDanse.com 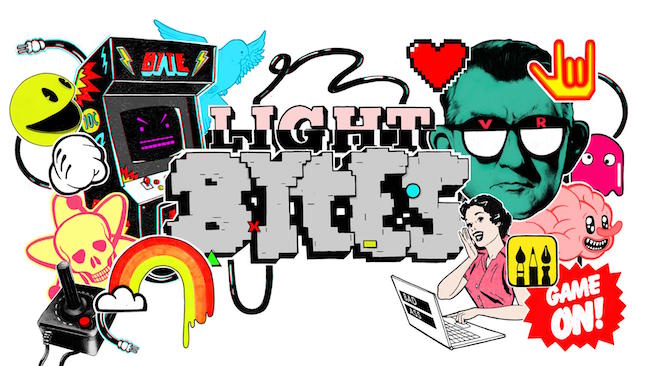 Light Bytes is a series of events run by Creative Edinburgh, Creative Dundee and We Throw Switches in partnership with Creative Scotland.