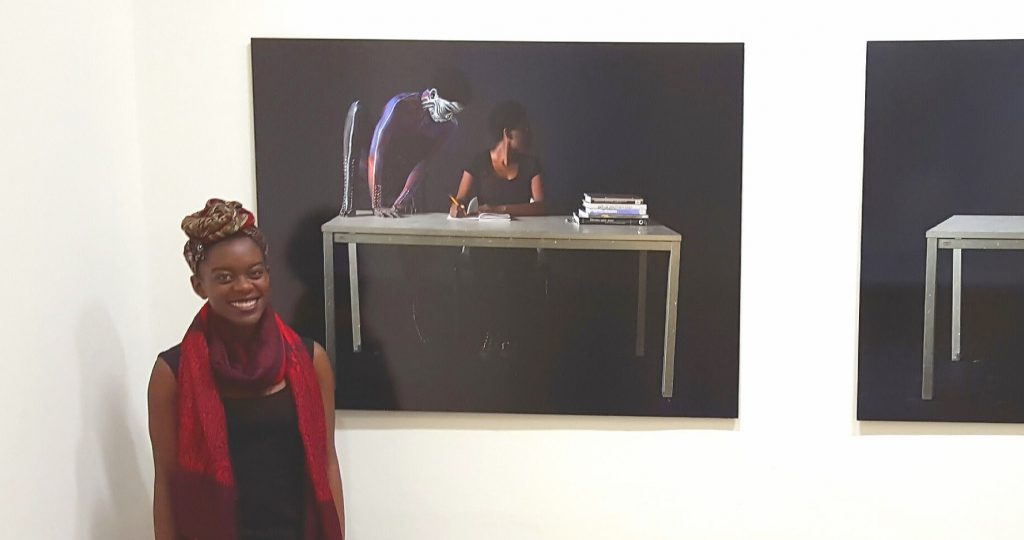 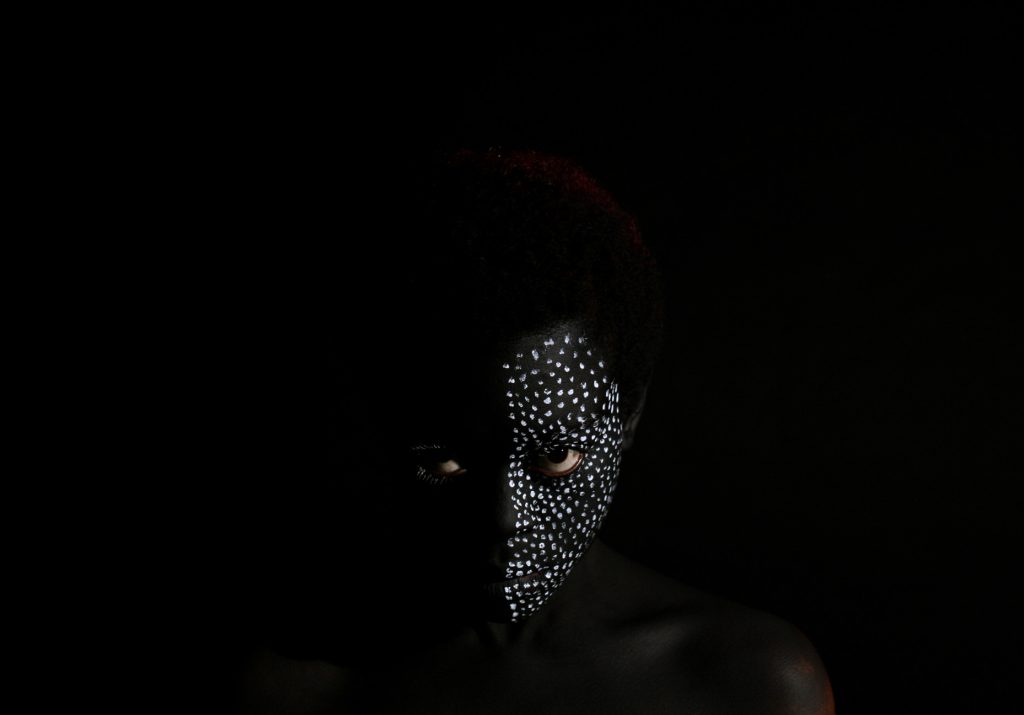 Sekai Machache is a Dundee-based artist and photographer. She developed a lot of her work during an Undergrad and MFA at Duncan of Jordanstone. Sekai is part of the Yon Afro Collective. Some of her work will be displayed Lanntair Arts Centre on the Isle of Lewis later this month.

Sam Gonçalves: Sekai I’m a fan of your work from seeing it at the Masters degree show, but I haven’t seen much else. What were you doing before that?

Sekai Machache: I did my undergrad at DJCAD, mostly focusing on photography and documenting performance. I never expected photography to be the finished piece, more of a medium other parts of my work. So I ended up becoming a photographer by accident.

SG: Tell me a bit more about your movement into photography, is it mainly digital?

Sekai: Yes, but I still see myself as a painter. Even in my photographs there’s a painting-like quality to them. I tend to go in and out of those two practices. But in photographing my performance pieces I really started enjoying the process.

SG: And what were the themes you were dealing with during your undergrad?

Sekai: My undergrad show ended up being a series of photographs called Eigrengau, which is ‘intrinsic light’, the one you see when your eyes are closed. That kind of grey darkness. This was a result of some research I had done on sleep paralysis and the hypnogogic state which is that area between sleeping and waking. But it was interesting because the moment I started using myself in these photographs, people would assume that the piece was dealing with themes of race. When I used white figures that assumption didn’t happen.

SG: That’s fascinating. Do you end up feeling stuck at a place where your art needs to be about race because of those assumptions?

Sekai: It’s a kind of feedback loop. One of the artists that I looked at is Kerry James Marshall. He does paintings of these stark black figures, and really early on decided to stick to that because black figures don’t seem to feature heavily in art. He said that if he and other artists didn’t deliberately do this, these figures would continue to be relegated.  So the more artists who use the black figure to represent universal human experiences, the more the work will be seen from a different perspective. Part of me does wish I could do work that is just about sleep and dreams, but more than that I want to be able to represent myself in my own work.

SG: That representation is so important. Growing up in Brazil I was always completely aware that, for example, the third henchman in ‘Charlie’s Angels 2’ is from Brazil. It was important for me to see my country represented in movies and culture in general, from a  very early age.

Sekai: Exactly, being reflected back is so important!

SG: So you can use this assumed perception on your work to say interesting things, but it’s still a burden on your creative process.

Sekai: That was my dissertation; ‘Blackness in Contemporary Art’. I explored whether it was a hindering factor or not. And people have told me before that maybe I’m too concerned with this issue, but the reason I am is that the minute the work is shown to the public, people read it in a very specific way.

SG: How did that grow into what you were dealing with in your Masters?

Sekai: Going into my Masters I wanted to figure out how to navigate and position my practice in relation to this issue. It was an exploration of the self, the tension between this ancient African self and a modern Western one. In the photos you see myself and then a Shavi, which is this Zimbabwean mythical idea of the spirit. I wanted that to be ever present, as you said like a burden, an idea that people looking would press into it. I wanted to understand my position in that as a Scottish artist. 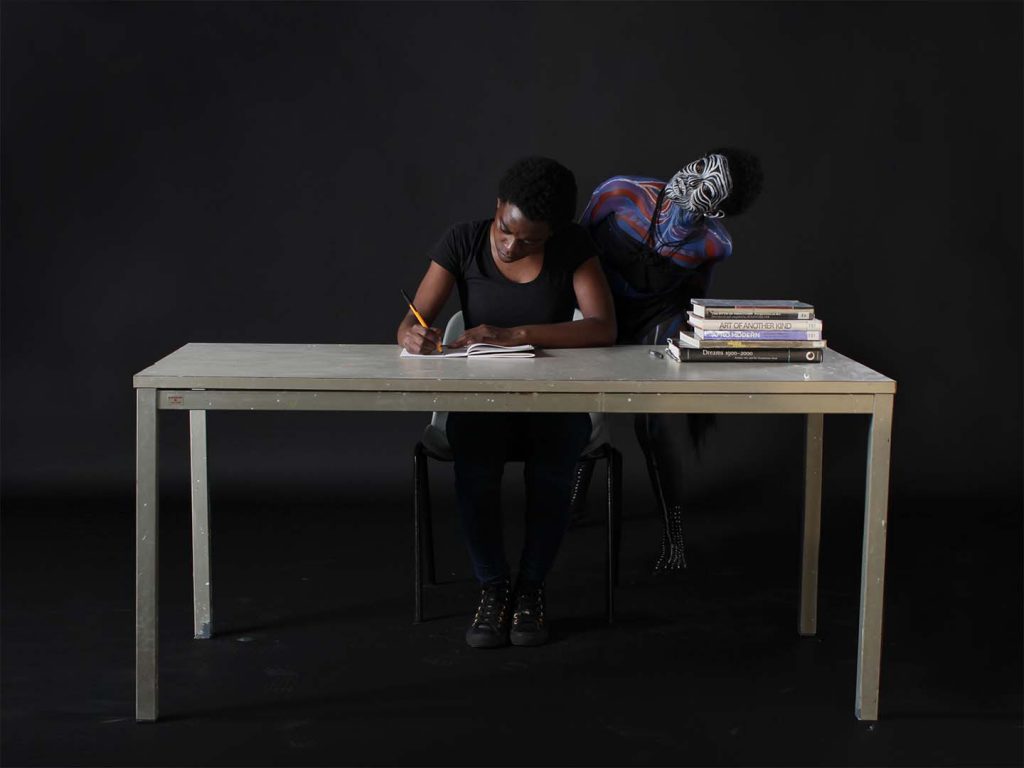 SG: It’s an interesting idea, because it’s not just a about your artistic process, there’s a real world implication if audiences are regularly making the same type of assumptions about your work.

Sekai: I’ve always been interested in this. How can we tackle these assumptions in an institutional level? How do we respond to something that is about a trend of assumptions, that people may not even realise they have? I was in the middle of that wave too and didn’t realise it. How can we raise this issue without getting a defensive response?

SG: You know; we’ve been thinking about this here. Since we’ve stepped up the amount of original content and interviews on the website we’ve been asking whether different groups in Dundee can see themselves reflected on the content we’re making. So I guess my question is… how can Creative Dundee work towards that and not be part of the trend?

Sekai: Dundee is such an exciting place to be right now, and so many people are doing so much! But often you will see artists moving to other cities for work. Maybe that’s where we need to focus, communicating to people that there’s so much happening in the city and it’s worth trying it out here. Then the more people stay, the more diverse a creative community we’ll have. But other than that, I guess it’s important to keep asking around and using connections to find different people doing interesting work in the city right now. It’s an ongoing process.

SG: Right. It’s a continual direction we need to go towards, not just a task we can quickly complete.

Sekai: Since you’ve been thinking about this, do you think you’ve made some headway in that direction?

SG: I think so. As the original content unfolds over the next weeks and months I hope that direction will become clearer. But it’s tough, I keep asking myself that question and trying to burst my bubble of friendships and connections.

Sekai: It’s the hard work of finding the creative people who are not necessarily in the ‘public awareness’ and then shining the spotlight.

SG: Your work seems to have a very clear evolution from your undergrad to your Masters, what’s next?

Sekai: I think I’ll just continue to experiment and imagine my work in different contexts. Research has also become a big part of my process so I hope to be going into that a little more.

SG: We always ask every Spotlight interviewee to give us a question for the next interview (even though they don’t know who is next), so here’s a question from Rebecca Horner: If you had a one-song soundtrack of your life, what would you choose?

Sekai: That’s hard… I think probably something from Solange’s album!

SG:  Her Glastonbury set blew me away…

Sekai: She has come into her own style. She’s excellent!

SG: What question would you like the next guest to answer?

Sekai: What draws you into Dundee? What makes you stay?