Spotlight: Bit Loom Games on the Importance of Making Together 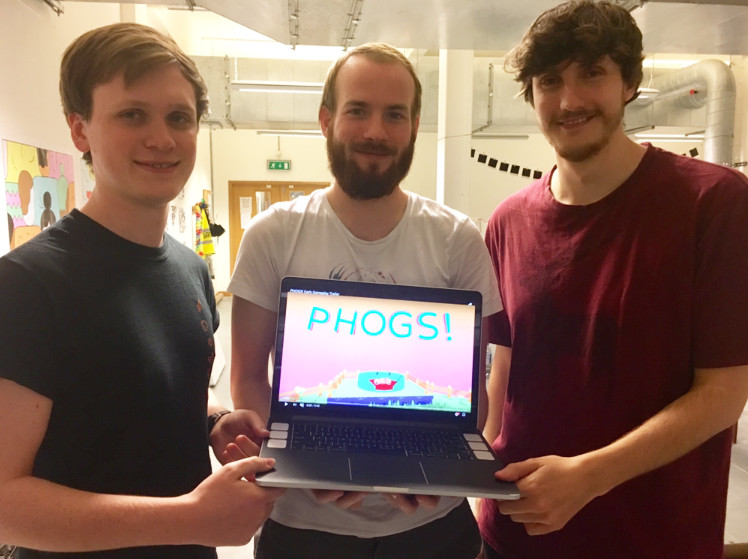 Bit Loom Games was formed after several years of collaboration at Abertay University on game jams as well as individual work on various projects including Everything is Peachy and BAFTA award winning Among the Stones. Their first project as a studio is PHOGS! a double-ended dog adventure.

Sam: Could you guys tell me a little bit about your different roles at Bit Loom Games?

James: I’m one of the programmers on the team.

J: And Doug, who couldn’t be here, is our artist. He does all of our 3D

S: How did Bit Loom Games start in the first place?

H: Doug and I made a game last year and decided that’s what we wanted to do on the long term.

J: We were all at university and decided to make a game together, just before we graduated. We wanted to make a really fun cooperative game that people could play together.  Actually, for the first time this weekend we showed the game to the public. We were down in Birmingham for Insomnia, it’s a gaming event where they have an expo area in which developers can show their games.

S: And this cooperative game turned out to be PHOGS, right? What has been the response to the game like?

J: Yeah! I think people are a bit apprehensive at first because they have to share a controller.

H: The idea is that each of you controls an end of a double-headed dog, so we wanted to connect people in the physical world like they were in the game by making them share the same controller.

J: It’s a very long dog so half the game is just trying to coordinate with each other and making sure you’re not pulling each other around.

H: It was nice to see siblings playing the game really well and parents telling us they never work this well together.

S: It’s an interesting approach. It seems to me like most games I come into contact with are not about collaboration with other players at all.

J: There’s definitely a lack of those games, but you do have some. There’s one called Overcooked where you have to cook a meal with other players and you have to work together.

S: How did you come up with the game? Were you aiming for something more collaborative from the start?

J: We want to make games we would play, things that are silly and fun.

H: We also want to find intersections of game design that haven’t been explored yet.

S: So collaboration is one of those things that is under-explored. What are some of those other intersections on game design you guys might want to explore in the future?

J: One thing I always come back to is creative games that give the player tools to do things. Something they can use to experiment and make something in the game that becomes theirs.

S: It’s like what Minecraft is doing to an extent, you get to create your own reality in there.

J: Exactly! And it’s good because you get put in a world where you get to create. It’s not just a blank canvas.

H: But a blank canvas can be a fun game too, like that kid…

J: Oh yeah, I teach at this programming club for kids and one of them told me he had found a really exciting new game on their computer where you could draw anything! The game was called Microsoft Paint…

S: What do you guys wish would happen in Dundee so that independent game developers are better supported?

J: A lot of people who make games in Dundee come through Abertay, so I wish there were more opportunities to work with makers and artists of other backgrounds. The best games I’ve played involve all kinds of disciplines. Maybe meet-ups that are more about creation and collaboration, as opposed to just development.

H: It can be a pitfall of modern games to be too game-centric. It’s important to go a bit wider.

S: We always ask every Spotlight interviewee to give us a question for the next interview (even though they don’t know who is next), so here’s a question from Sekai Machache: why Dundee?

J: Dundee has so much potential and I really want to be around to see and be part of that potential being fulfilled.

S: And what question would you like me to ask the next guest?

J: What’s the most vivid dream you’ve ever had?