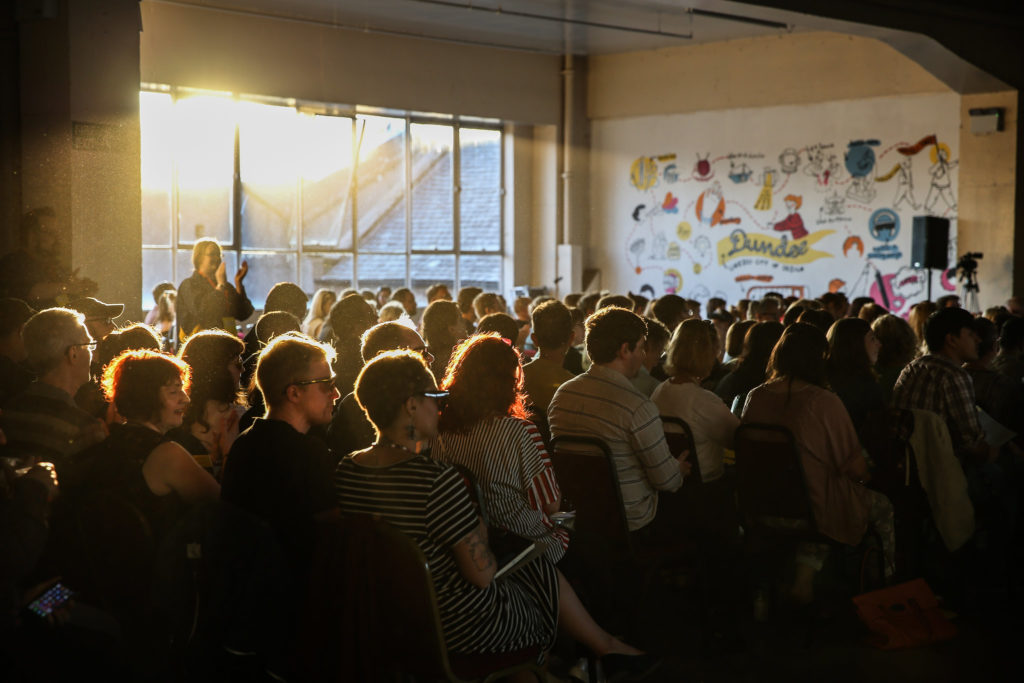 Last updated December 2017 – Dundee has always been a hub for design and innovation. A small but almost perfectly formed city, it has a remarkable location, with 82% of Scotland’s population within 1hr 20mins travel radius, it has a rich mix of industries, a huge creative community and a ‘get stuck in’ mindset – all which have helped ensure Dundee is well connected and well designed.

Dundee became the UK’s only UNESCO City of Design in December 2014, joining UNESCO’s Creative Cities Network of global design cities including Seoul, Kobe, Montréal, Shenzhen, Berlin, Buenos Aires, Helsinki, Bilbao and more. A prestigious award that recognises the huge contribution the city has made to design worldwide; and like other cities we have our challenges, but the City of Design status is something which Dundee can build on and do even greater things. 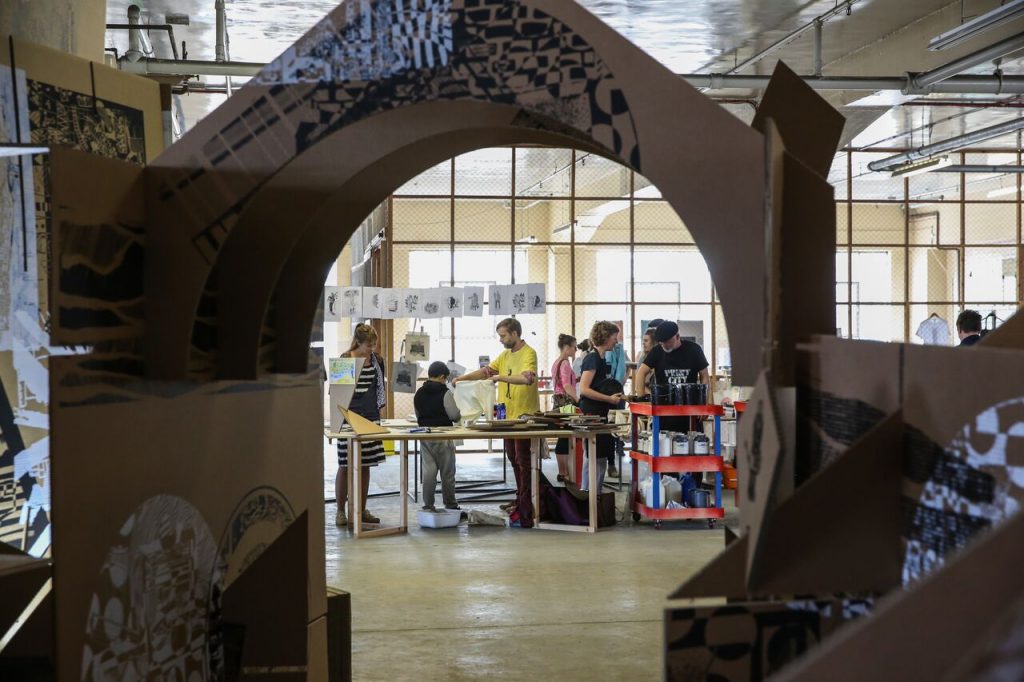 If you go back just 100 years, you will find our little city in the midst of something huge. Dundee was a premiere whaling port, shipbuilder and jute textiles city – the interdependency and access to materials was key, the ready supplies of whale oil were used to process raw jute, then exported worldwide. Dundee’s shipbuilding expertise led to RRS Discovery of the Antarctic being designed and built in Dundee.

Although now mass production is almost all gone, design is an important part of the city’s contemporary creative scene. Duncan of Jordanstone School of Art and Design and School of Architecture (DJCAD) is consistently rated in the top 10% of the UK’s art and design schools; and fashion designer, Hayley Scanlan graduated from DJCAD before setting up her successful business; Hayley is the only designer to ever win the Scottish Young Designer of the Year award, twice.

Because of Dundee’s rich design education, provided by the three main institutions: Duncan of Jordanstone, Abertay University and Dundee & Angus College – many innovative and high profile designers have started their design careers in the city. 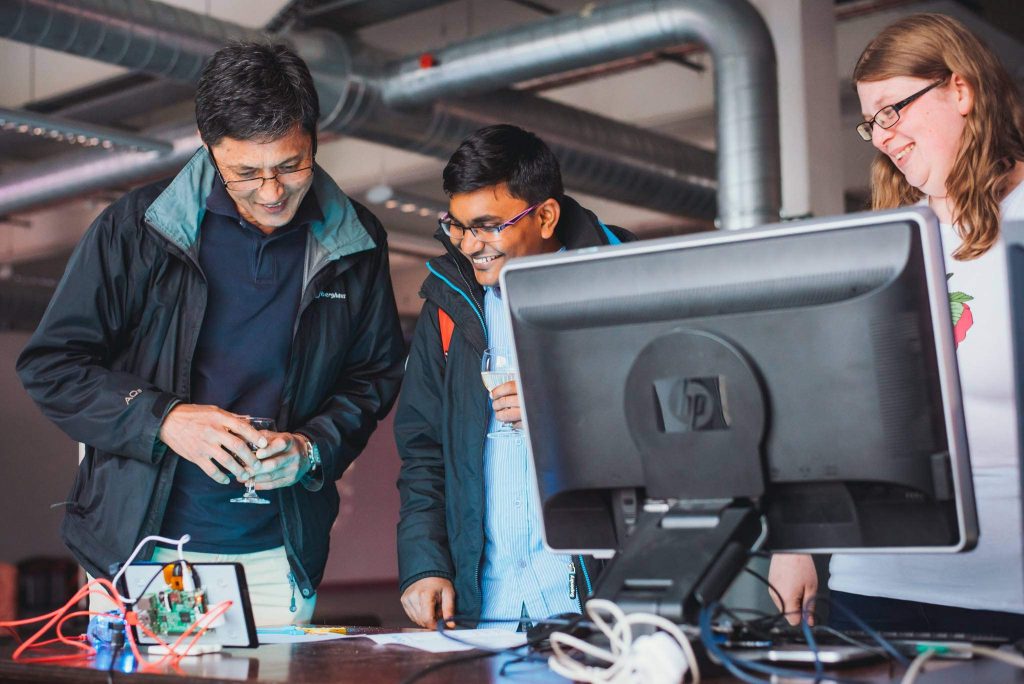 The city’s former jute mills and industrial spaces have now been re-energised from the ground up, by hundreds of creatives and collectives such as Tin Roof, Generator Projects and Wasps Studios. Along with individual designers, creative businesses and the universities/college they have really driven the practice and understanding of design in the city. These spaces coincidentally form a nice semi circle around the centre of the city and host a number of regular shows, pop-ups and selling events. Spaces such as District 10 made from shipping containers, house more digital creative businesses.

Although there have been some questionable urban planning decisions over the years, Dundee has lots of great architecture. You just have to look at the McManus, Dundee’s Art Gallery and Museum, never mind go inside to appreciate it’s classic neo-Gothic revival style. Frank Gehry’s first building in the UK was Maggies Centre in Dundee, which is a beautifully tranquil day centre space designed for cancer patients and their loved ones. 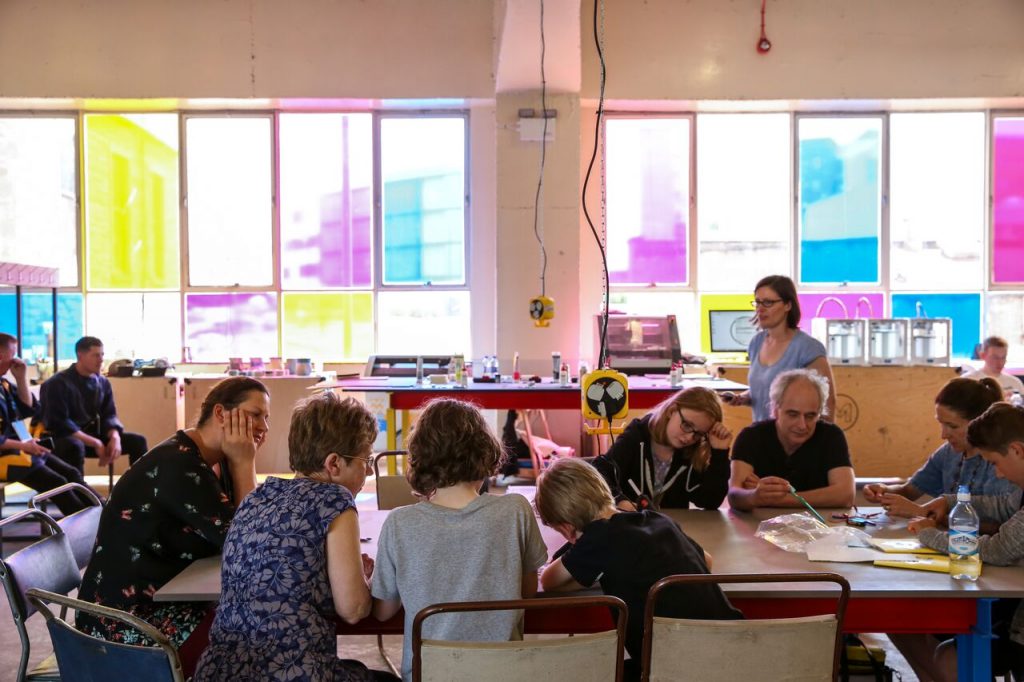 One of the best ways to appreciate the shape and size of the city has to be from one of city’s design greats – the Tay Road Bridge. Driving, cycling or walking straight over the bridge into the heart of the city at night = a twinkly wonderland. There are a number of great cycle routes around the city, covering a 27 mile city path. In 2014 Dundee has been trialling the London Routemaster bus, designed by Heatherwick Studio.

Dundee has a number of festivals including NEoN Digital Arts, Scotland’s only digital arts festival; and Dee Con, an anime, comics, games and animation convention.

We Dundee was an online crowdsourcing platform which invited people around the world to say why they loved Dundee and what they would like to see happen in the city’s future – it was designed as part of Dundee’s Bid to be UK City of Culture. Over 4,000 people fed in their ideas, a number of which have already been taken forward by people and organisations across the city. 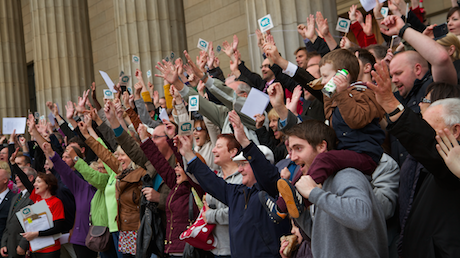 We Dundee, sending off the City of Culture Bid.

There are a number of design businesses and community initiatives who are focused on sustainability, including Kirsty Maguire Architect who specialise in eco design and low energy Passivhaus buildings; also Notio Studios who create designs which focus on the whole life performance of buildings.

The city is increasingly known for its innovative cultural-led regeneration approaches and the public programmes, education and outreach work done by Dundee Rep Theatre, McManus, Scottish Dance Theatre, Dundee Science Centre, Hannah Maclure Centre, Dundee Contemporary Arts (DCA) and many others have been particularly important in bridging divides. Since opening in 1999, DCA has held exhibitions including notable Scottish designers and artists such as, David Shrigley, Scott Myles, Timorous Beasties and Johanna Basford.

Small Society Lab an experimental design laboratory which explores and develops understanding of the small city of the future, in partnership with Dundee’s communities. 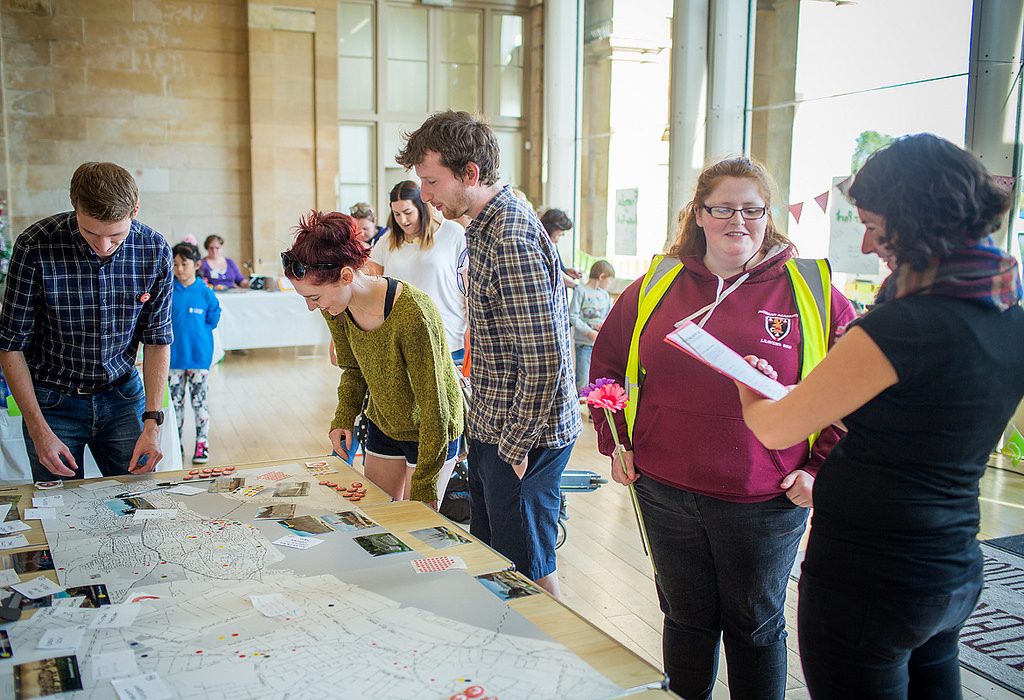 Dundee Urban Orchard is a city-wide art project that supports individuals and community groups to plant and care for small-scale orchards across Dundee; as an Orchard City, DUO aims to also raise awareness of food sustainability issues. The Bharatiya Ashram centre has an overall objective of improving quality of life, particularly for those from ethnic minorities; its often uses cooking and eating to share cultural experiences. 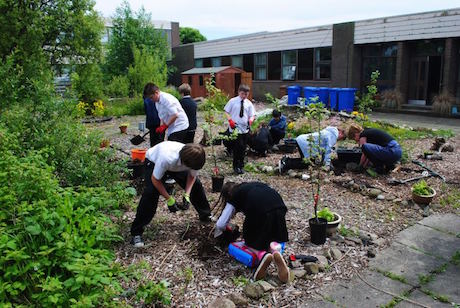 Dundee also has a significant £1 billion, 30 year waterfront redevelopment underway to reconnect the city with the water. With more average sunshine hours than any other Scottish city, it’s pretty well placed for a future in the design of renewable energy technologies.

Dundee has produced a number of global innovators and innovations, including: James Bowman Lindsay who gave the world the electric lightbulb; Sir Patrick Geddes, the founder of modern town planning; Dr Thomas Maclagan, who helped cure the world of sore heads in the shape of Aspirin; James Chalmers developed the adhesive postage stamp; Janet Keiller, created Dundee Marmalade; and Valentines of Dundee designed the world’s first travel postcards, enabling the world to see what the rest of it looked like for the first time. 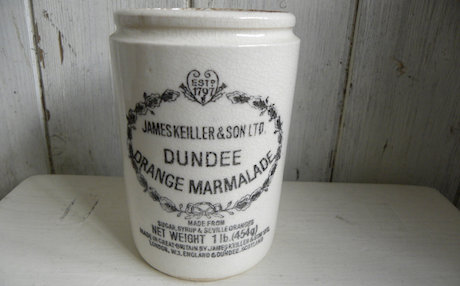 DC Thomson began publishing back in 1905, specialising in newspapers, magazines and comics, of course notably The Beano and Dandy; they’ve continued to innovate over the years and have branched into digital products which include online genealogy.

Comics are still very much part of the city’s culture – University of Dundee runs a unique Comics Studies Masters programme and several undergraduate courses. The Scottish Centre for Comics Studies supports the publication of titles under their comics imprint, UniVerse – these include: Anthology, Tales of the Universe, and Cosmic. 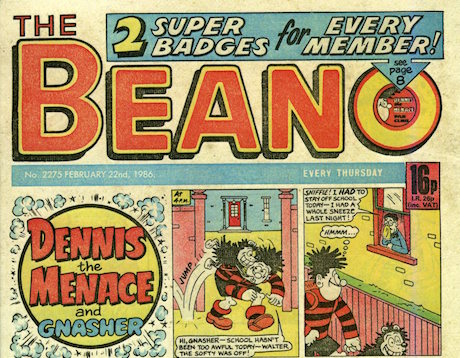 NCR design and develop world-leading hardware tech for cash machines. Their Research and Development division is based in Dundee and most cash machines you use have probably at one stage been conceived and designed in the city.

Dundee has a world leading life sciences cluster; and has one of the largest life sciences research institutes in Europe. Resident, Sir Philip Cohen has been described as one of the world’s leading scientists. Researchers have designed and developed a huge number of life saving medicines and technologies, with particular breakthroughs in cancer research. LifeSpace is a gallery which engages scientists and artists in collaborations and cross-disciplinary research and public exhibitions. 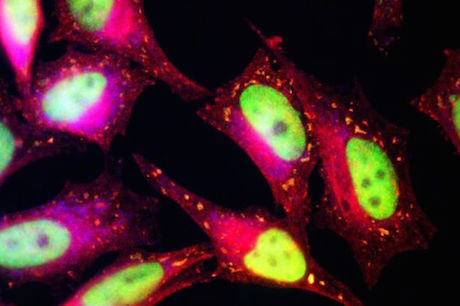 Life sciences in Dundee have developed a number of breakthroughs particularly in cancer research.

Video games, from the start to the centre

As an former heavy industry city, Dundee has always had highly skilled workers; so when watch manufacturers Timex branched out to start producing parts for ZX Spectrums back in the 80s, somehow Spectrum computers found their way into the homes of Dundee’s kids… And so the video game designers of the future and the video games industry was born, it’s a great and true story. 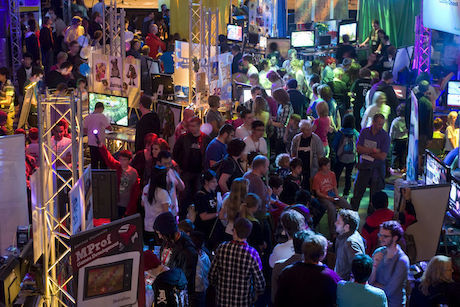 The original Grand Theft Auto and Lemmings series (check out this great DMA site for the full story) were created in Dundee in the 90s. Ever since, digital start-ups and Abertay University have been at the heart of the thriving games community. Dundee has many digital pioneers, from digital toy makers Denki, to porting Minecraft on to Xbox and Playstation thanks to 4J Studios; with many more games companies based here of all scales. 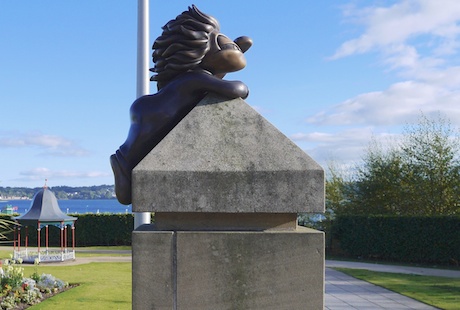 V&A Museum of Design Dundee will be the first ever purpose built design museum outside London – an international centre of design for Scotland. Designed by Kengo Kuma Associates who is the architect behind the Tokyo 2020 Olympic Games Stadium it focuses on design heritage in Scotland, with major touring shows and fostering relationships between design and business. 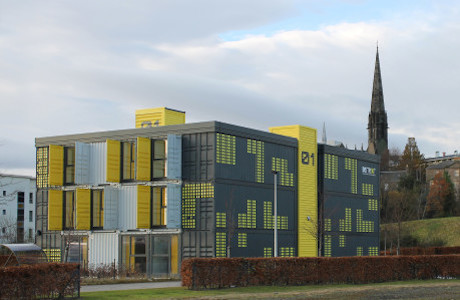 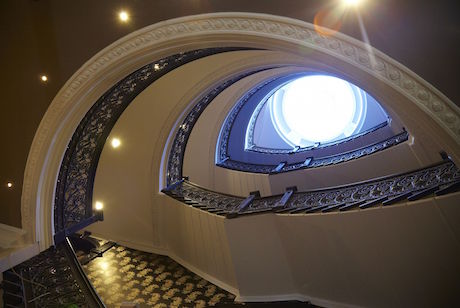 Keep in touch with Creative Dundee to receive all the latest creative and design news from the city and let us know what we have missed out. 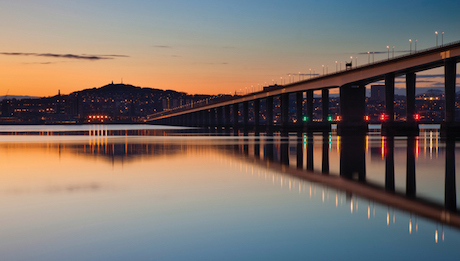