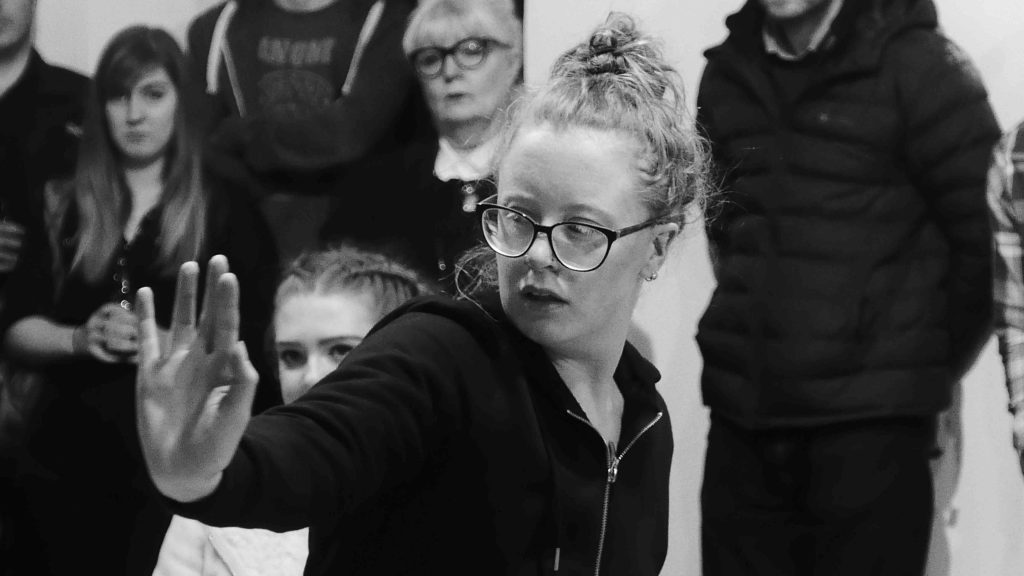 Gemma is a post-hip-hop dancer and choreographer who works predominantly with dance and spoken word. She is the Artistic Director of The Artifact, a company which creates dance in conversation with other art forms through choreographic work, improvisatory events and education. Gemma has worked with Rosie Kay Dance Company, Manchester International Festival and Pavilion Dance South West.

Sam Gonçalves: So… did you do your undergrad in Dundee?

Gemma Connell: I did my undergrad in English Literature at Warwick University. I graduated from there in 2010.

SG: What was the connection between that and doing your masters at DJCAD?

GC: See, I liked books and I liked reading and I did those kinds of subjects in school. Back then you couldn’t do dance in my school, though they introduced it after I left – which is always the way isn’t it?

GC: But I have danced since I was 10; I was the quintessential 10-year-old girl dancing to S Club 7 with her friends in our bedrooms. But I just kept that going – we did it at the youth club, then through Duke of Edinburgh, and I just kept getting involved in dance projects.

SG: And what kind of dance were you doing in those projects?

GC: It was street dance and hip hop. So, because that was my passion but I didn’t have any qualifications from school specifically in dance, I chose to go to Warwick as they had twenty-four dance societies – as well as an amazing english literature course!

SG: And then you moved on to DJCAD for an MFA so you could concentrate on the dance practice?

GC: Yeah, I had been in Scotland for a year and had done freelance stuff. But then I felt at this stage where I wanted to just focus on being an artist but was scared of just doing that. So that’s when I decided to do the MFA on Arts, Society and Publics at DJCAD.

SG: Which is a great course because it takes in all kinds of practices.

GC: Yes! They let you develop your work in there and you can make your own path.

SG: That’s a fascinating journey from just being a teenager dancing to things everyone dances to, and then taking it own as an artistic practice that in lots of ways you are deconstructing. So, I guess I’m just wondering what dance means to you? How would you define it?

GC: Dance is movement. It’s the movement of someone expressing themselves through their body, and everybody has a body so anyone can do it. Even if all you can move is your eyes, you can still dance. It’s an anthropological need, since the dawn of time humans have beat out rhythms and danced to it. It’s who we are.

SG: It seems like a lot of what you are doing is about that democratisation of dance.

GC: That’s a really interesting word. I’ve only recently started describing my work like that. So, from my time at DJCAD I developed a practice called THE REMIX. It takes the idea of the original hip hop DJs who, in a very simplified way, would take bits from a song and bits from another and put them together to create something new. I started to use that with dance and spoken word, in a performance I create with the audience. It’s putting communities at the heart of what I do.

SG: I guess there is a little bit of controversy with that type of work, both ethically in using other people’s work but also in the way that’s it’s trickier to do that today with the laws around copyright. Why do it at all if it can raise so many difficult issues?

GC: Well, I’m inviting people to remix my work so I don’t think there’s an issue there. But, totally, there’s a culture of reappropriation in hip hop. The originators of hip hop used different things to forge an identity, which is a good thing. The problem is today when work or riffs are used and not credited to their creators. That’s is a problem, specially when the larger culture does not question that.

SG: Tell me a little bit about The Artifact and what came after the MFA.

GC: The Artifact creates dance in conversation with other art forms. One of the art forms we work with is spoken word. We started Flow! which is an event that asks dancers and spoken word artists to respond to each other. It’s a great way to get people to reconnect with their bodies.

SG: And some of what you are doing next is connected with gaming, is that right?

GC: Yeah! Thanks to the Amps Community Ideas Fund we are collaborating with Biome Collective on some sessions that will bring gaming and dance together.

SG: Every interview we get the guest to ask a questions to the next person we interview. So this question comes from Laura Darling; what was your most embarrassing moment?

GC: Oh there’s been far too many… I’m so clumsy…

SG: I didn’t expect this from a dancer.

GC: Yes… In a school trip to France I managed to fall all the way down a set of stairs to where all the other students and teachers were standing and watching me.

SG: My god… I’m feeling anxious for you right now.

GC: They never stopped referencing it.

SG: I’m so sorry. What a nightmare. Do you have a question for the next guest?

GC: What ice cream flavour would you be and why?