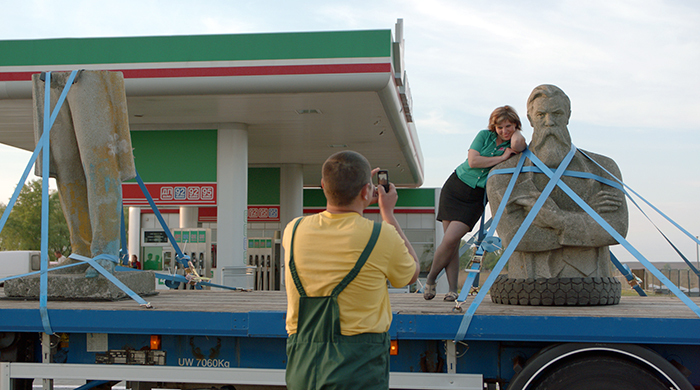 One century after the 1917 Russian revolution, Cooper Gallery is proud to present in Dundee, the Scottish premiere of Ceremony, an exhibition by filmmaker and visual artist Phil Collins. Preview and panel discussion will happen on 17 January, 17:30 – 19:30.

Reflecting on the work and legacy of Friedrich Engels, co-author of the Communist Manifesto with Karl Marx, Ceremony is a nuanced and timely exploration of Engels’ ideas within the context of the social conditions in contemporary Britain. Appropriating a decommissioned 1970 statue from former Eastern Europe, Collins’ multi-faceted project explores how we perceive and still live today with the complex politics that underpin revolutionary desires. Featuring an artist’s film and a set of printed backdrops, Ceremony at Cooper Gallery indexes the symbols of revolution, industrialisation and contemporary Western imperialism to provide a critical meditation on both the passing of an idea and the necessity for its urgent reappraisal in the 21st century.

Acknowledging Engels’ observations on the condition of the working class in the 19th century as its starting point, a Panel Discussion on the preview evening will bring together representatives from activist and community groups in Dundee and beyond to reflect upon impacts of the past decade of austerity measures in the UK.

The exhibition will be on between 18 January – 16 February.