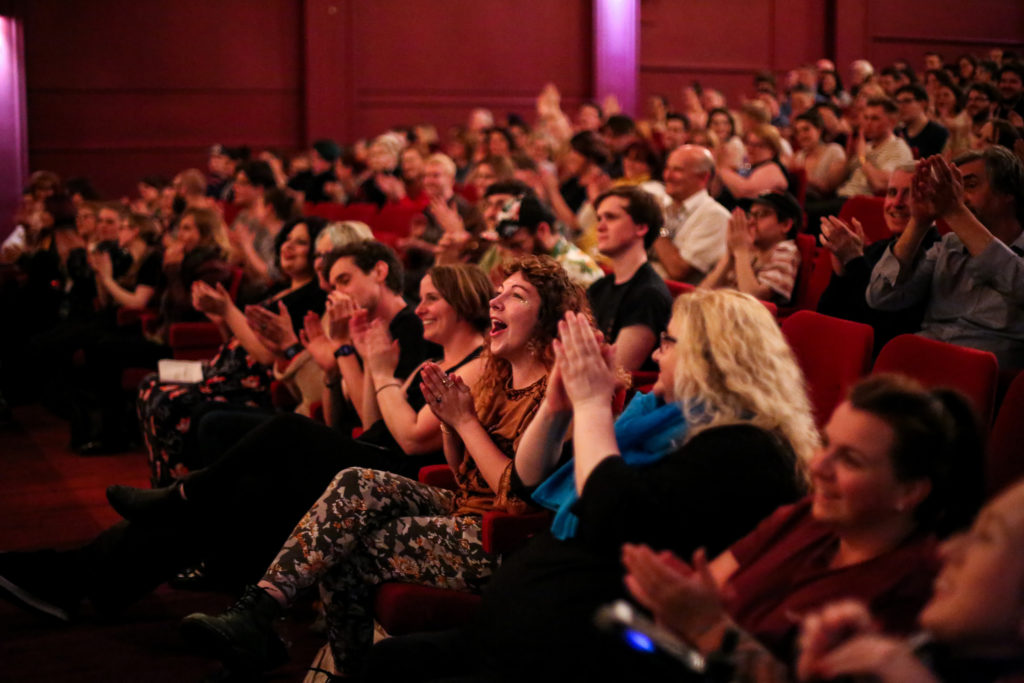 As we continue to look back at 2018, we asked Creative Dundee’s staff and board to suggest their PKN talk highlights from this year’s events. It was a tough ask, from a total of 43 incredible PKN presentations at 3 events, so here are just 10 of those highlights. However, we recommend watching all 43 talks via the links below!

Pecha Kucha Nights run in over 1,000 locations around the globe, and we recently discovered that Dundee’s PKNs are now officially the largest events in the UK! We also began BSL interpreting PKNs from Vol 21 onwards to improve their accessibility for audiences.

This is done with huge thanks to everyone for your support by attending, speaking at, and tuning in to the livestreams online. Our appreciation also goes to Astrid Klein and Mark Dytham in Tokyo for starting PKNs back in 2003.

Gaz Robinson is a game developer and lecturer living in Dundee and a Director of Biome Collective: a co-working space for people to collaborate and make games & digital art. He’s fond of building good things for art, bad things for fun and produces “excellent” #content on Twitter at @ViewtifulGaz

Emma Jones is Head of Production at Scottish Dance Theatre, a role which takes her all over the world. She also works as a lighting designer, her last three projects have taken her to Havana to work with the Danza Contemporanea de Cuba, to Derby Theatre for Peter Pan and Edinburgh for The Lover for a co-production between Scottish Dance Theatre, Stellar Quines and The Royal Lyceum. Emma has lived in Dundee for 15 years. @SidelitezJones

Lynn Parker is a lecturer in animation and interactive media at Abertay University who, when not teaching, makes strange interactive work that tries to make the world more playful and often makes people feel a bit socially uncomfortable. As part of Abertay Game Lab, she is channeling these playful interventions into academic research and is currently in the final stages of writing up a PhD thesis about bringing people together through play. When she’s not teaching, making game controllers out of tinfoil and kids toys, scribbling with chalk around Dundee or out and about with her Beagle, Snoopy, you can find her random thoughts and adventures on twitter. @toadrick

John Alexander is a local councillor and the current Leader of Dundee City Council. He is the youngest council leader in Scotland at the age of 29 and has been a councillor since the age of 23, holding senior positions in the ruling administration including Convener of Housing and Convener of Neighbourhood Services. As the political leader, John sets the strategic direction, political agenda and policy development of Dundee City Council. He leads several key bodies including the Dundee Partnership, Scottish Cities Alliance and chairs the Policy & Resources Committee which oversees the City Council’s total gross revenue/capital budget of £890 million. John has led efforts to involve young people in local decision making including creating a Children & Young Persons Champion, creating the Dundee Youth Fund and supporting the involvement of young people on council committees. @CllrAlexander

C.Gul has explored many different techniques and mediums over the last 6 years, all centred around the common theme of seagulls. He began by creating seagull models out of recycled items and quickly combined his love of seagulls and spray-painting, developing his current art style. Over the years he has honed techniques that have allowed him to create the large pieces that can be found scattered around Dundee today. @c.gul

Hannah Cook and Nicole Ritchie are a youth worker and young person musical duo. Aside from working together at Hot Chocolate Trust, they have created a great relationship through their love of bands/artists and performing! They are excited to share their passion at Pecha Kucha.

Quintana Beattie is a school student, artist, and dragon. In her spare time, she loves to paint and draw. Art is her passion but she also loves watching really good movies, longboarding and listening to music. She loves movie quotes but couldn’t tell you what her favourite movie is if she tried. “I hate peas” as Heath Ledger once said. She doesn’t hate many things but does hate untrustworthy people and country music. She ain’t no auld McDonald!

Paul Dock is a 4th year Illustration student at DJCAD focussing on creating simple but fun images and communicating his sense of humour through art. At the beginning of the year he begun posting videos on Twitter which generated a bit of attention on social media. This has lead him to using social media as a tool to build a following, share artwork, sell things he’s made, engage the community of online artists and create various interesting opportunities. He’s currently in the midst of merging his art and social media in order to explore possible career paths. @pauldock93

Fi Munro (PhD) is an ‘Intuitive Self Care Mentor’. In 2016, while working as a researcher, she was diagnosed with stage four ovarian cancer. She was just 30 years old. In the months that followed, understanding her diagnosis, recovery and health became her full time job as she dedicated her time to uncovering the possible causes of her cancer. Since then Fi has trained in yoga, reiki and crystal therapy; launched her own business; published a book about her journey; been featured in two BBC documentaries; and won multiple awards. Today she is healthier and happier than ever before and believes cancer saved her life. She is currently training to be a shaman and is excited for what the future holds. @fkmunro

Dr Anthony Schrag was born in Zimbabwe and grew up in the Middle East, UK, Canada and is currently based somewhere in Scotland. He is an artist and researcher based at Queen Margaret University (Edinburgh), and central to his practice is a broader discussion about the place of ‘art’ in a social context. The artist Nathalie De Brie once referred to his practice as ‘Fearless’. The writer Marjorie Celona once said: ‘Anthony, you have a lot of ideas. Not all of them are good.’ @anthonyschrag

Pecha Kucha Night Vol 23 on Monday 25 February 2019 at Dundee Rep Theatre, details to follow soon – register for our news mail out to hear about tickets first and Amps gives you discount rate tickets.

What is Pecha Kucha Night?

Pecha Kucha Nights were originally started back in 2003 in Tokyo, as an event for creatives to meet, network, and talk about their work in public. Since then Pecha Kucha, meaning ‘chit chat’ in Japanese, has spread internationally running in over 1,000 cities across the world. The much loved and respected format is relaxed, simple and enjoyable, with something for everyone – presenters have 6 minutes 40 seconds to show and talk through their 20 images, each for just 20 seconds – this keeps things fast and fun!