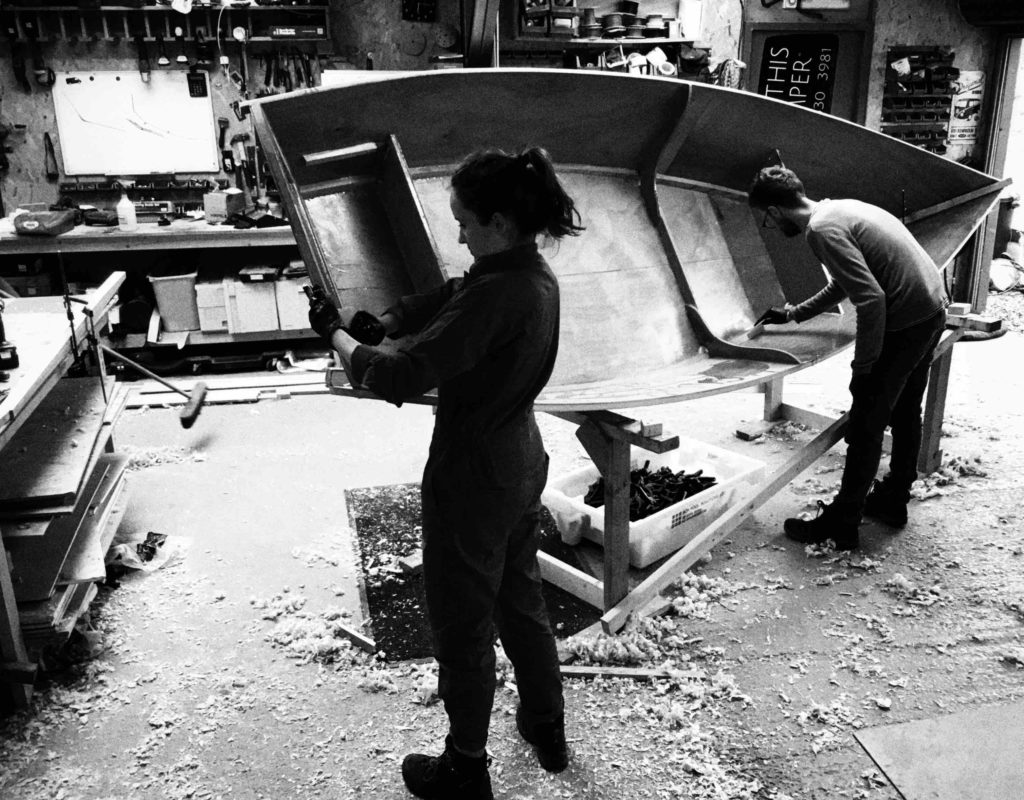 Our blog series regularly invites guests to share their thoughts on different aspects of life in Dundee, their own practice and anything in between. In this edition, David Scott writes about his Boatbuilding Residency and shares some of the photos of a process that turned out to be insightful for his practice and deeply inspiring. Find out more about his work.

I can’t remember how it came about but at some point last autumn I said to my wife Pamela I was going to build a boat. When she asked why I replied, “everyone loves boats”. Admittedly this isn’t much of a reason though I had been experimenting with woodwork while exploring ways of working that allowed me to just be in the moment and create free from any expectations. This was partly a response to my professional work in digital photography and video but also to aid my recovery from a recent recurrence of mental ill health.

After twelve years together Pamela had become used to hearing me spitball plans and schemes so nothing more was said until a couple of weeks later when I read about the Archipelago Folk School’s Boatbuilding Artist Residency in the Creative Scotland Newsletter and couldn’t ignore the serendipity of such an opportunity. So I applied, was accepted and with fees kept low through the Folk School’s bursary programme, I was able to self fund the trip.

Draw a line west from Dundee on the map and you’ll eventually get to Oban then Mull. It’s a lovely drive on the A85, the ferry to Craignure then go 26 miles across the island to reach Ardtun and Wild Campers, a croft/workshop run by Neil Harvey featuring stunning views across to Bearraich Hill. Accommodation was basic, camping with a homemade shower block and caravan toilet. While it took a bit of getting used to due to the wind and rain, by the end of the week I was enjoying it and sleeping well enough though many preferred the couch or floor in the croft.

There were nine of us in total covering a range of artistic disciplines. The residency was led by Archipelago Folk School director and boatbuilder Ben Wilde who was assisted by artist and boatbuilder Catherine Weir. I was joined by playwright Andrew Edwards, storyteller Ben Macfadyen, painter and printmaker Georgia McDowall, graphic designer Maeve Redmond, sculptor Corrie Thomson and jeweller Nicola Turnbull. We soon established a working rhythm: breakfast at eight, workshop nine till five and dinner at seven. We took turns to cook for the group in pairs over one day, using this time away from the workshop to reflect as well doing a short presentation on our artistic practice after dinner. These talks and the discussions that followed were some of my favourite moments. Before long our nine o’clock starts began to slip later and later and Andrew mentioned a turn of phrase from his theatre work, ‘soft nine’, meaning around nine possibly closer to ten. We loved this and eventually, it became the name of our canoe. To paraphrase Lao Tzu, we did not hurry, yet everything was accomplished. We were a group of nine and when joined by Neil at mealtimes we became ten. It seemed fitting.

Our time in the workshop was spent building a Chase Small Craft Caravelle Skiff, oars and a canoe. Both were made in plywood to keep the vessel light and assembled from pre-cut kits given the short build time. The construction process was designed by Ben to marry technical boatbuilding with easy to understand techniques and was an incredible learning experience. We were joined in the workshop for the week by Neil’s chocolate Labrador Peggy, after whom we named our skiff, and for a day by an elderly spaniel named Puck. I found the process of construction fascinating and documented each stage using an iPad with the Snapseed app as well as shooting several rolls of film.

Alongside Wild Campers, a campervan hire and conversion business, Neil also runs a croft keeping chickens and Hebridean sheep. We shared the field we were camping in with four pregnant ewes, the rest of the flock grazed in the field opposite. One morning several escaped and we spent fifteen minutes clumsily rounding them up. Later, while sitting on the deck I heard a ewe crying out. She shouldn’t have been pregnant on account of being too young but looked to be struggling to lamb. I raised the alarm and after being helped by Neil and his team of local crofters she successfully gave birth. It later transpired the ewe and two others had accidentally become pregnant prior to Neil buying them and in a tragic turn of events later that day one died unable to lamb while another went missing. It was a sobering insight into the harsh reality of crofting.

Finally, we were ready to launch our craft. After some uncertainty regarding a passing storm the wind thankfully died down and we only had the rain to contend with. We headed over to Uisken beach where storyteller Ben created a ceremony involving a labyrinth at the centre of which was a model boat and a bottle of whisky. After a safety briefing and toast, we were ready to go. Rowing out on the turquoise sea in something I had a hand in making was an exhilarating experience. It was the perfect conclusion to a week that had provided camaraderie, insight and learning alongside an opportunity to just be in the moment free from expectation. After all, as Kenneth Grahame wrote, ‘there is nothing – absolutely nothing – half so much worth doing as simply messing about in boats’.

The Wind in the Willows, Kenneth Grahame

‘Nature does not hurry, yet everything is accomplished’