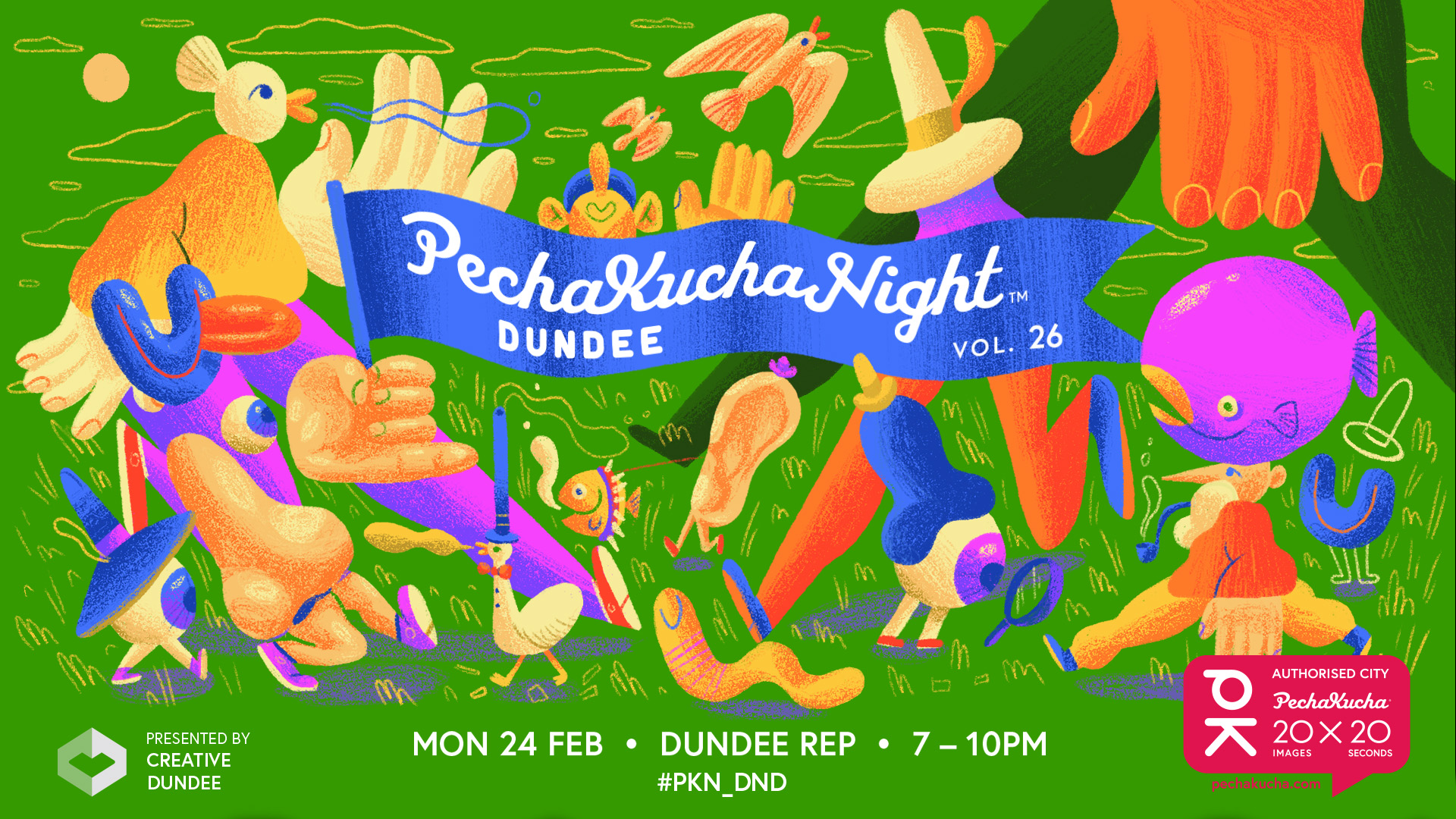 PechaKucha Night Dundee Vol.26 happened on Monday 24 February 2020 on the main stage of Dundee Rep Theatre, hosted by Creative Dundee. We have hosted PKNs in the city since 2011, which now runs in over 1,000 cities around the world!

It’s a simple quick-fire format – speakers show 20 images, each for 20 seconds. Each person chooses a topic – their work, their loves, hates, hobbies or holidays! The night is a great way for people to meet and hear about interesting activities happening across the city and beyond.

Always different, entertaining and inspiring; there is something for everyone at this event that first started in Tokyo in 2003 and has now grown into a global phenomenon. Our regular ‘Pass the Mic’ feature on the night gives anyone the chance to shout out the events and opportunities they have coming up.

Creative Dundee is an organisation which supports creative talent to base, grow and sustain their practice in and around Dundee, by connecting and amplifying the city’s creativity.

A huge thanks to Scott Balmer for the incredible PKN artwork. Check out his website for more.

Gary Robertson is a family man, a binman, writer, author, playwright, performance poet, musician, actor, mountaineer and keep-fit fanatic. He was awarded ‘Scots Performer o The Year’ at the inaugural Scots Language Awards 2019. He won the original reality BBC TV Series ‘SAS Are You Tough Enough?’ Gary has four books published, and has written, staged and performed in three very successful plays at Dundee Rep. He’s appeared on TV and Radio promoting and talking about the Dundee dialect and climbed all of Scotland’s Munros. But his real passion first and foremost is his family. @DundeePoet

Rachel Simpson is an audio designer for Outplay Entertainment, creating and producing all music, sound effects and voiceover for the UK’s largest independent mobile games developer. She also writes and performs music and has recorded with acclaimed acts like The Hazey Janes, Modern Studies and Scottish Album of the Year nominee Andrew Wasylyk, as well as her own solo projects. Originally from Dublin, Rachel has lived in the Dundee area since 2015. @rachelboing

Clare Brennan is an artist, curator and lecturer at Abertay University, and co-founder/curator of NEoN Digital Arts. Her main thing is facilitating collaborations that bring together art and communities, exploring experimental, playful and meaningful ways to connect with each other, share stories and create together. Beyond work she likes to get involved with other creative organisations in the city, particularly those that support young people, including Optimistic Sound and Breakthrough. She totally loves Dundee and its people. @ClareDundee

Sarah Kiden is a technologist and researcher, working at the intersection of technology and society. As an Early Stage Researcher on Open Design of Trusted Things (OpenDoTT), a joint programme between the University of Dundee and Mozilla, her research focuses on the impact of technology and the Internet for grassroots communities and neighbourhoods. @MsKiden

Lisa Williamson and Gemma Nicol are theatre practitioners and co-artistic directors of the new Dundee-based theatre company Hidden Route. Collectively they have been working in the participation sector for over 20 years. During this time, they have created and directed theatre productions and projects with people of all ages in a diverse range of contexts including; schools; health and social care settings; and across the communities of Dundee. Hidden Route offers a space where young people from all backgrounds and experiences can come together to collaborate, be curious and respond creatively to the world around them. @hiddenroute_

Dr Drew Hemment is an artist, designer and academic researcher. He is Chancellors Fellow at Edinburgh Futures Institute and Edinburgh College of Art at the University of Edinburgh. Over 25 years, he has been one of the key figures who has shaped the field of digital art and culture. Drew has worked with cities and nations representing culture and research at the highest level, including work for the Singapore Government on Smart Nation and Singapore’s 50th anniversary. Drew founded FutureEverything in 1995, and was Artistic Director for 23 years of the UK’s annual festival of digital culture. He champions open, bottom-up culture and introduced art and human centred design into flagship IoT and Smart Cities programmes in UK, Europe and Asia. He leads with Professor Mel Woods the GROW Observatory, the world’s first continental scale citizens’ observatory. His latest project, Experiential AI, supports artists and scientists to create accountable and responsible AI. @toodrew @experientialAI

Olivia Hicks is a PhD student and independent comics creator living in Dundee. Her research focuses on British and American girls’ comics and her creative work is informed by this as well as her identity as a queer woman of colour obsessed with Riverdale. @missoliviahicks

Saoirse Anis is an artist, curator and committee member at artist-led gallery GENERATORprojects. In all of these practices, she takes delight in being able to explore the fascinating and beautiful relationships between materials, memories, and the essential movement which runs through everything. She shares her time between working for money, volunteering for love, and thinking about the potential that lies in caring for ourselves and others, and the extent to which this nurturing can benefit us both personally and politically.

John Richmond is a retired firefighter who enjoys cycling and walking on the many beautiful routes around the local area. Discovering one beauty spot which is full of wildlife was also full of rubbish about 10 years ago led to a hobby/obsession of litter picking, mostly accompanied by the family dog.

Edith Adam, Style and Image consultant since 2009. French by birth, in Scotland in Carnoustie-sur-Mer for life and love since 1992, and International at heart.  As a Dramatic, Classic and Natural, Deep Clear Cool, long triangle body with short legs, tall and large scale, she is never stuck for what to wear. She loves clothes for the message they convey about our life and preferences. She offers sartorial and practical advice to women and their friends on how to dress well to grow in confidence and feel amazing. Tough love and a good dose of no-nonsense advice is what makes her clients say she inspires them to think differently about what they wear. @FrenchEdith

More speakers will be announced soon!

Find out more about our Amps Supporters Network for discount ticket entry.

Thanks to a generous contribution from someone in the Amps community, we will be able to provide free transport for anyone in Dundee whose disability impedes or makes it harder to attend this event. If that’s you, book a ticket and email us at news@creativedundee.com and we’ll organise an accessible taxi to take you to the event and back!

*This event will be BSL interpreted by Jennifer Ramsay and Linda Duncan. Shoot us an email at news@creativedundee.com if you’d like to be seated in a specific section to see this better.

*This event will be live-streamed, filmed, photographed and eventually shared on the Creative Dundee social media platforms. If you do not wish to appear in any of the images that are made public, please let us know at news@creativedundee.com