Blog: An Open World During Lockdown 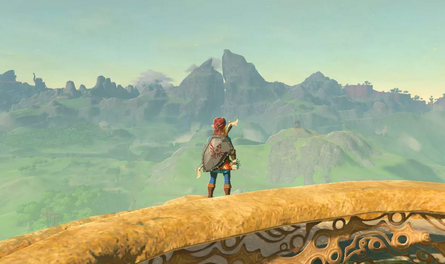 Our blog series regularly invites guests to share their thoughts on different aspects of life in Dundee, their own practice, and anything in between. Katja Steel Kusakova is a producer from the Czech Republic. Since moving to Dundee three years ago, she has worked at a number of creative organisations in the city, delivering a wide variety of projects and events. The first game she ever played was Pokemon Yellow on a neon pink GameBoy and she has been a video game enthusiast since.

It is perhaps human nature that being forced under a lockdown, suddenly we feel the urge to go out and explore the outside world. Lately, I have found myself on a prowl every day, stalking the west end of Dundee, with no particular destination in mind, crossing to the other side of the road every time I see a person coming towards me. Sometimes I think of the phrase “avoiding someone like a plague” and laugh a little, bitter laugh. But such is a new normal in these strange days. However, there is only so much satisfaction you can get from walking around your neighbourhood over and over again in overlapping circles, no matter how beautiful the Tay is looking on that particular day.

When the constraints of my self imposed lockdown start to feel too tight, I find myself flicking through my video games collection, reloading old saves of the open-world games and diving back to places where I have spent long days, usually trying to save humanity or at the very least myself. Trying to decide if I want to spend some time in the ridiculously realistic rendition of downtown Tokyo, visit a fantasy realm based on Northern Italy or venture into the wilderness of Pacific NorthWest, there is some comfort in rediscovering these worlds I have already been to. Like visiting a childhood home, finding pieces that you have forgotten about.

The open-world video games suck you in for hours on end, and sometimes you realize that after two hours of gameplay, you have only crossed from one town to the other and are ready to continue your quest (I am looking at you, Red Dead Redemption 2). And even if you are playing a game for the first time, there are only a few feelings as satisfying and in a way confusing, as being awestruck, while watching an artificial sunset from a virtual mountain. The environments that the video games developers have created for us are beautiful and haunting and filled with things to discover, no matter where you go. And they are also, despite the enemies trying to lower your health bar, inherently safe and in your control. Letting you get lost without ever leaving your living room. This is where I find a little bit of solace in uncertain times like these.

Video games tell us a lot about who we are. In that sense, they are no different from movies and books, just sometimes masking it behind slasher mechanics and bloody finishing moves. Like, hey do you know that game about a greek god killing his way through the Norse mythology, tearing enemies apart? That game is actually about the fragile relationship between father and son after the one thing that keeps them together disappears. This slick video game with a badass archer protagonist taking down dinosaur-like robots? Yeah, that one is about how humans destroyed the world and then rebuilt it again.

You can even draw an invisible connection between Dundee and the open-world video games, as the first game to fully implement open-world mechanics was the third edition of the Dundee video game flagship Grand Theft Auto. Which is a nice little piece of trivia that makes me feel happy. It reminds me how significant the Dundee video game cluster is, creating a piece of something that became so much bigger, in the end, bringing joy to many. If there was ever any doubt about how important our local game makers, artists, and programmers are, this crisis is showing that they are in fact vital.

Video games have long been looked down on as a form of escapism but in the world turned on its head, doesn’t everyone need at least a little bit of adventure? I cannot wait to be able to travel again but in the meantime, I am grateful that even under lockdown, the borders of my world can still remain, at least virtually, open.

If you have never played a game before and feel like the stillness of the lockdown is weighing down on you, maybe make it a tick box on your pandemic to-do list to give one a try. You can start small. Maybe Journey or What Remains of Edith Finch, both of which you can finish in a few hours. Or you can go big and dive headfirst into the crazy vast world of Wild West in the slow-burning Red Dead Redemption 2. There are no rules. You have the controller and it is, ultimately, all up to you.

Zelda: Breath of the wild

Maybe save for after the pandemic: