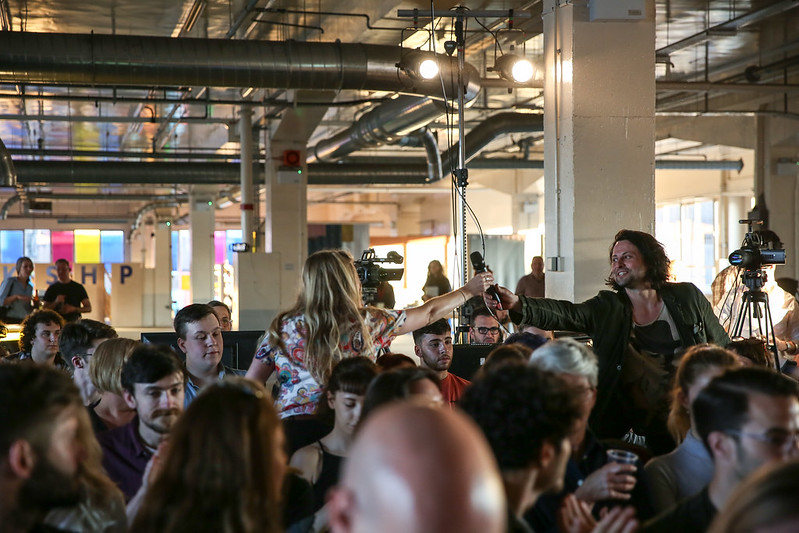 Our blog series regularly invites guests to share their thoughts on different aspects of life in Dundee, their own practice and anything in between. Erin Farley is the Library & Information Officer for Local History at Dundee Libraries. She works with communities around the city to share stories and ideas about the city’s history, landscape, memory and people, and is particularly interested in the power of creative histories and traditional storytelling.

We are at once physically constrained in a very specific place, and completely unbounded by it. I can have after-work drinks with friends in Edinburgh and London at the same time, then moments later attend storytelling sessions in Ireland. Twitter delivers constant newsflashes of hope and despair from across the world. Everything is happening at once, and yet I have seen little of the city for days except the boarded-up pub and café opposite my window. I can’t walk much further than the medieval boundaries of Dundee without worrying this might be beyond the scope of my permitted ‘local area’.

What is the point of a local historian in a modern pandemic? Especially one who has spent most of their career focusing on the face to face of oral history, reminiscence and storytelling.

As many have pointed out, this isn’t the first time something like this has happened. It’s almost too obvious: history repeating itself. Internet folklore quickly seized on the idea that there has been a viral pandemic in the twentieth year of every century since 1720. In reality, there is no neat pattern, but there is a far longer history of outbreaks as fast and as boundary-defying as the internet, always accompanied by news, rumours, stories which mutate along with the disease itself.

In late 1866, the fourth cholera epidemic of the nineteenth century hit Scotland. The Dundee newspapers daily reported death figures for here and across the world. This was not a virus but a bacterial illness, carried in water, but it was similarly contagious. The village of Methilhill in Fife was struck hard by the illness. On the 27th November 1866, the Dundee Courier reported that all families who had the means to do so had abandoned the village. One family attempted to escape to Cowdenbeath, only to be shunned and driven out again by the community there, fearing they would spread the disease.

The following week, a poem by a Methilhill writer using the pseudonym ‘Justitia’ appeared in the People’s Journal.  It has also been recently anthologised, in Kirstie Blair’s 2016 Poets of the People’s Journal. Titled “The Plague-Stricken Village,” it is a poem deeply tied to its time and place, both in content and form.

Can any stay this mighty plague

Or say from whence it springs,

Or wipe away its sad results,

The misery it brings?

The father here is left to mourn,

The mother’s heart to grieve,

And children orphans here are left,

A loss they can’t retrieve.

There is hope as well as mourning in Justitia’s poem. One verse encourages:

Wipe thou the tear, assuage the grief.

And cheer the drooping heart.

May all from this the lesson take,

To choose the “better part.”

The formal poem ends with a plea to those who have not lost a loved one to be thankful and the sound of an imagined infant’s cry, but a concluding note is also an important part of the piece. Justitia tells us that the population of Methilhill before cholera broke out was 403. At the time of writing, 67 had died, “being 16.4% of the population.”

Methilhill, badly hit as it was, was a tiny point in a network of cholera outbreaks. Tens of thousands of people died of the disease that year, and countless people felt as lost and desperate as Justitia. We can speculatively trace the local and international life the poem has had since its writing, its circulation around Fife and the rest of Scotland. Each newspaper passed around family members and friends, and many more were posted abroad to link emigrants with their birthplace. Perhaps Justitia never imagined their words lasting beyond that December, but their voice is here now, reprinted and shared again. Since Blair’s anthology was published in 2016, it has found a new layer of resonance to the modern reader.

Is it unusual to feel like you are living through history? Should we be on our best behaviour? The past five to ten years have – as the now-familiar online trope says – felt like we’re living through a series of Higher History questions in the making: “Discuss the role of creative media during the 2020 Covid-19 Pandemic. Extra marks for reference to pre-existing local press traditions.”

There are no simple answers to be had from the past just now. It’s hard to see where the lesson Justitia hoped we would learn is, beyond the simplest one – care for each other, in your home and across seas. Care is the most fundamental everyday work, whether it’s your job to make sure your community is fed, provided for and looked after in illness (thank you), or the important unpaid work of looking after families and dropping off shopping for neighbours.

Care is also writing and making something which – whether explicitly about these times or not – lets us be part of a community again. Reading, watching and listening to the things others have made is care too. Stories build up layers of human connection, in place but also across time. Whether or not we can see it happening we are all involved with each other. Keep going, cheer the drooping heart.