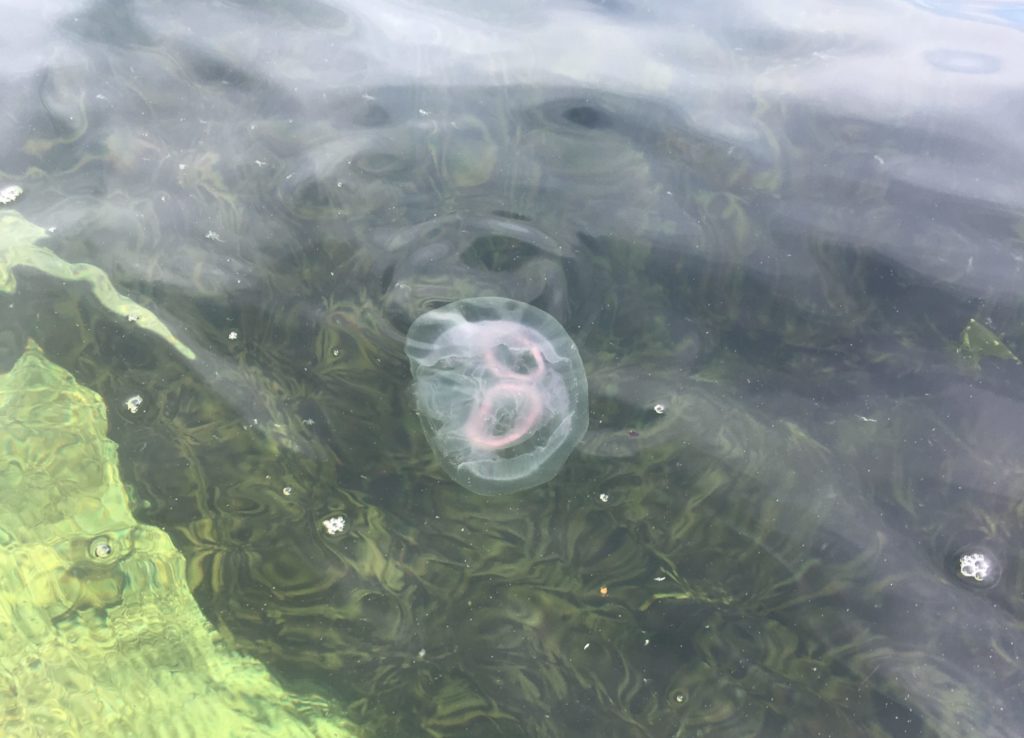 Our blog series regularly invites guests to share their thoughts on different aspects of life in Dundee, their own practice, and anything in between. We have invited a few members from GENERATORprojects to take part over the next few weeks. Jamie Donald is an artist and fish enthusiast based in Dundee. She is currently one-tenth of GENERATOR and one-third of Wooosh Gallery.

GENERATORprojects is an artist-run gallery.

What GENERATOR actually is relates to its name similarly to how a sentence relates to the thought that formed it. GENERATOR is an amorphous blob, with a few soft structures of precision and stability.

I could make an equation for writing if my brain was working better today, involving:

I know at some, or many, point/s, you would have to find the square root of the thought, to get back to the bottom of it; to get back to what you were trying to say.

The stable points in the thought I have, that I want to turn into this text, are roughly equatable to the bullet points I wrote when I started:

We could call that the thought palette for the text from which I have to paint into solidity the shape of the idea that surrounds it.

GENERATOR is an artist-run gallery (and project space). The artists who run it are primarily recent graduates who serve on a voluntary rolling committee for a maximum tenure of 2 years. Within that time we each, in a fairly organic way, take up tasks that best suit our natural inclinations, whether as communicators or makers or carers or persuaders.

Most of what you directly interact with while working with GENERATOR is gaseous – emails, meetings, contracts, bills, disagreements, promises, loo rolls, receipts. It has some points of solidity (both the name and the building are holding up reasonably well) while its liquid parts ebb about in the form of members, committees, artists, collaborators, works – the stuff that fills/floods the space and most faithfully shows its form.

GENERATOR is 25 years old, and is also at no point ever more than 2 years old. It is an adult if you would consider a large overcoat walking around filled with 12 or so babies to be an adult.

When you leave art school you are unresolved. Full of potential, but finding it invariably impossible to stay within the visible spectrum without finding a body on which to attach yourself.

We form a body because we need stability, no matter how tenuous.

I will occasionally sign an email or message as, ‘from GENERATOR x’.

I didn’t know anything about siphonophores before I started writing this, and I learnt everything I’m going to say about them from a single website that only contains a few references. One reference leads back to a Mr. Steven H. D. Haddock, a marine biologist with a fish for a surname. This is a Good and Positive Coincidence and gives me Great Confidence in my Current Endeavour.

Siphonophores are colonial animals, that is, animals made up of lots of small animal-ish things called zooids. They are famous for making or helping people think about what constitutes an individual. Each zooid has abilities and inabilities: some can swim, but not eat; some can eat, but not swim; some can make eggs and sperm to get a whole fresh colony up and running (but still can’t eat or swim), while some just go about stinging stuff. Their connections are delicate and precarious. They all depend on each other to survive.

Some siphonophores look a lot like jellyfish. They have long tendrils and float in the sea. Some of them will sting you at the beach and you will not know whether to get someone to pee on you.

From a proto-zooid centre new zooids are constantly produced, which mature as they are carried down the siphonophore’s ever-growing tentacle-bits, eventually dropping off from the main body and floating away in little clusters through the watery abyss. Scientists (on this one website) don’t know what happens to them after that, which conveniently marks one of the edges of the metaphor and the point at which a thought trails off to a dead end as I stare into space.

If we, as in GENERATOR, are one – which is where I am going with this – we are not a particularly famous one (think Portuguese man-o-war: Transmission, argmannia elongata: GENERATOR).

GENERATOR is a chain of slippery individuals, perpetually moving, reforming, sliding away from the centre.

I have lost the body. Square root!

Most artist-run spaces, or ARIs, have very unprofessional roots. The people who started them were artists wanting a place to show a) their own work and b) the work of their friends.

A jellyfish is an animal. It does not entail many metaphysical speculations about its status as an individual or a collective, other than its/their name being a singular plural.

A jellyfish has organs, and they are all in place.

Some organs are valued more highly, as with the brain versus the spleen, the heart versus the kidney, the eye versus the appendix.

Jellyfish, as far as I know (from googling a diagram just now), have a sort of skin-brain, a few mouth-tongues, gonads, tentacles, some stomach parts, and various floatation-umbrella bits, and so here the metaphor might find another edge, in the struggle to locate in an unfamiliar anatomy the staffing structure of a contemporary arts organisation.

No matter: an institution has organs, and they are all in place.

For all their best efforts, siphonophores end up looking, to the untrained eye, almost exactly like jellyfish.

Two biologically distinct organisms end up taking a near-identical form. Is that the best way to be, in the sea?

Written in what I suspect is already dangerously dry concrete, is the idea that ARIs produce professionals: committees emerge as administrators, curators, managers, fundraisers – someday directors. Written on the wind – or maybe in the sand, or maybe on the surface of a drying sea – is a primordial stance: ARIs produce artists. Artists who have learnt how to best support other artists.

I am here to make a case for a reversal of the mirroring: for the gelatinisation of the jellyfish, for its organs to acid-bath dissolve into polyps of potential, the sediment displaced by shared responsibility and shared creative labour.

The PH of human urine usually lies somewhere between 6-7 (only slightly acidic – not acidic enough to dissolve a living organism, even if you were severely dehydrated). In any case, the myth entails that we pee on the sting, not the perpetrator.

The most potent solution may reside in the unknown future of those detached zooidal clusters – to take their learned soft structures and form creatures anew.

*GENERATOR not a marine biologist, nor any other kind of professional.*