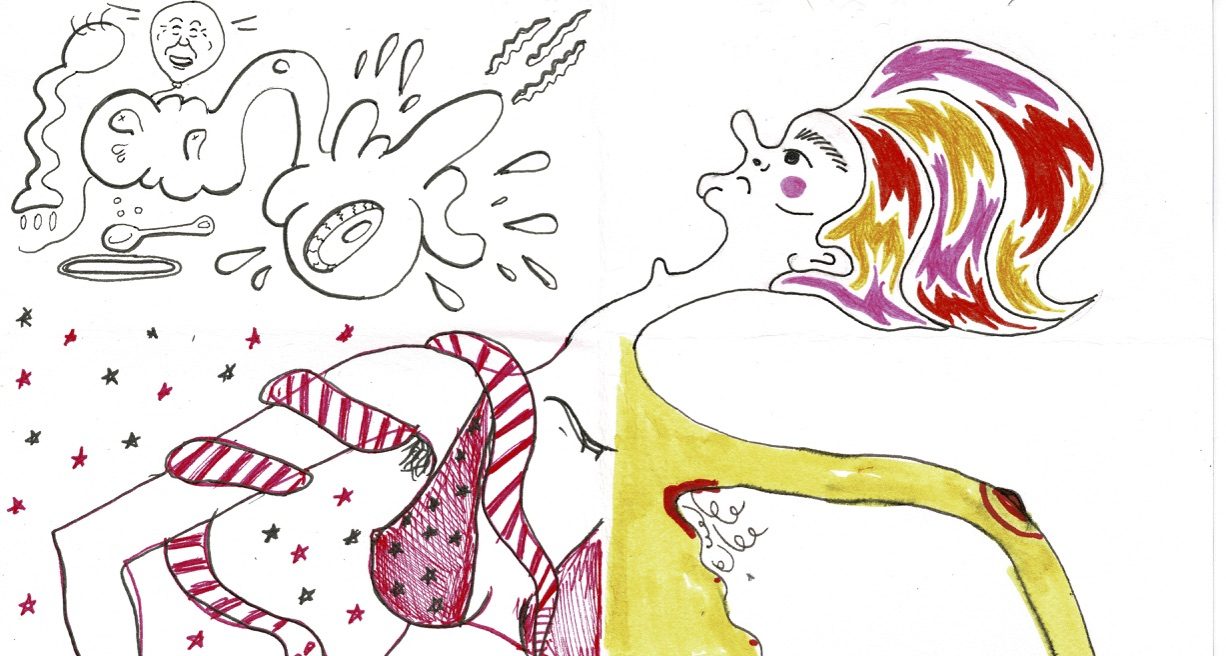 Our blog series regularly invites guests to share their thoughts on different aspects of life in Dundee, their own practice, and anything in between. We have invited a few members from GENERATORprojects to take part over the next few weeks. For this piece, they have put together an exquisite corpse (or Consequences) text and drawing! You can find the two images they made right at the top, and then the text below them for ease of reading.

This sentence consists of twenty-six words, a pangram sentence contains all twenty-six letters such as: “The quick brown fox jumps over the lazy dog”. A white cat with a blue tail drinks droplets from a weeping monstera – the saint jean house drink is Aperol with a Laphroaig mist – soft Paradiso. And that’s when you figured out I’m just a pile of air-dried clay; stop trying to sell me softer elbows. Pacifying passers-by as they wander through my mind.

You know I’d look out the front window at any time of night, and he’d be out there, gas lamp on the ground and under his car working. Take a moment to look at a plant, let your eye trace over its leaves and follow its stem into the earth; there you will most likely find another, a fungus. Vampire of time and memory absorbs what’s left of perception.

That was the day James forgot how to use breaks and went over his handlebars into a wall he came home looking like Carrie. And on a Saturday after we came out of the cinema we’d get a poke o chip’s, I’d eat all the crunchy ones. Well, actually, nothing would ever be quite like that again.

Cancel subscriptions. Pay bills. Book appointments. Sit on the toilet at 6am drinking Berocca. Petroleum jelly. Probiotics. Cotton rounds. And a note on my phone from 2018 that says ‘noes’. Once in a group crit someone had a go at me for using big words – some big words I know are: unsubstantiated, reprehensible, asinine, conceited, derivative. However, there’s not much money in giving power to the people, sucks eh?

A sentence containing twenty-six words will be approximately as long as this one, with some discrepancy incurred due to the varying lengths of individual words. Anarchism is the self-directed autonomous action of a group of people who desire self-determination. Two bottles of German beer and two packets of crisps please, usual seat in the corner, haben sie feuer? Do you have fire? I have been told that in Poland ‘Dirty Dancing’ appears as ‘swirling sex’. it is actually ‘spinning sex’ – delightful slippages.

Everybody goes to art school with dirty socks on, and rolls. When a group of people get together to focus on a common cause, We see power. The fear that had previously turned itself into fire leaves unnoticed embers of a failed endeavour towards something more than apathy. You can do this without weed, you don’t need to get high. You’re just going to sleep, it will all be fine.

Short words I know are: egg peg leg cob hob nob pig big wig hat fat cat sit tit bit ab fab fee fi fo fum. These two organisms collaborate by offering mutual support through exchanging nutrients. My predictive text says I should say: that It’s not gonna is the best day to come pick up my lunch tomorrow morning and go home. There will be a coffee and cake. Biologists suspect that this partnership was a major factor in allowing plants to move from water to land. Biding for a concrete crown but left surrendering for exposure.