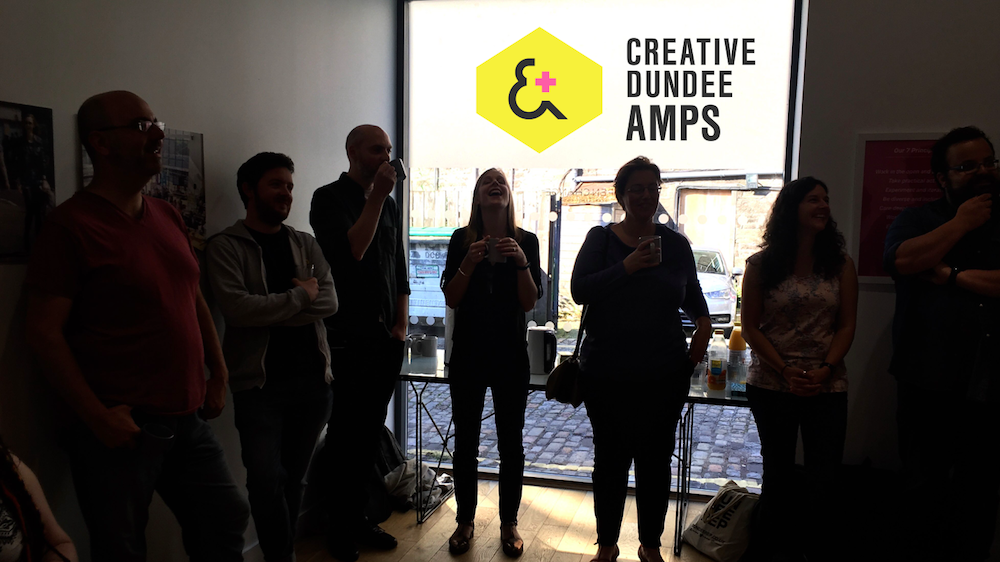 In November 2016, Creative Dundee launched a brand new innovative project for the city, the Amps Supporters Network. In this feature we look back at why Amps was created, what it’s achieved and what Amps aims to do in future.

We created Amps to involve everyone in creating a better way to build Dundee’s local creative scene, our communities and the future of the city. A question often asked is where the name Amps comes from? We felt it made sense to name the project after our core objectives to amplify and connect the city’s creativity, which is also why Amps is represented by an ampersand (&) graphic.

Since launching, over 100 Amps have joined us in our quest to make Dundee even better – our supporters are a great mix of individuals, organisations, companies and students, in the city and far beyond. We’ve hosted regular Amps Breakfasts and Meet Ups across the city, getting to know each other and revealing more about the people behind city spaces like: The Rep, Urban Quarters, DCA, UNESCO Design Shop, Open Change and the Vision Building.

Our next Amps Meet Up, on 6th Sep 2018, This Much We Know, Now at Discovery Point will hear from some of the people who’ve built the city’s cultural scene over the decades, just a week before V&A Dundee opens! It’s open to everyone to come along to and it’s free for Amps to attend.

In October 2017, Amps supporters voted and selected the first ever Amps Community Ideas Fund awardees at the Annual Forum.  The awarded project which was a partnership with Dundee Women’s Aid, enabled the team to work with a group of 10 young people aged 9-12 years to deliver a one-off full day workshop and create a new game using paper prototyping, word games and movement based tasks. This great collaboration was led by two Amps supporters, Gemma Connell, choreographer and Artistic Director of The Artifact, and Malath Abbas, independent game designer, artist and founder of Biome Collective.

We’re also focusing on enhancing Amps visibility through our supporters page, a special Amps Facebook group and features in our regular mail out.

We’re proud to have been enabling greater accessibility to our digital content and events – Amps support enables us to have British Sign Language interpreters at Pecha Kucha Nights, caption our original video features and enable people with disabilities to get accessible transport to attend our events.

Finally, all Amps also benefit from Pecha Kucha Night priority booking / reduced price tickets and as tickets for PKN increase for the first time in 4 years to £7, we’re pleased to say they will stay at £5 for Amps supporters.

If you would like to find out more about becoming an Amp, or read about the benefits, please contact us with your questions, or:

Join us as an Amps Supporter: www.creativedundee.com/amps

“The Amps Community Ideas Fund enabled us to try something without worrying about strict outcomes or targets. We were able to test new ways of working, and a new partnership. The fund also gave the young people at Dundee Women’s Aid the chance to be involved in something they hadn’t seen before, expressing themselves through gaming, movement and words, in ways that are not often afforded to children.”