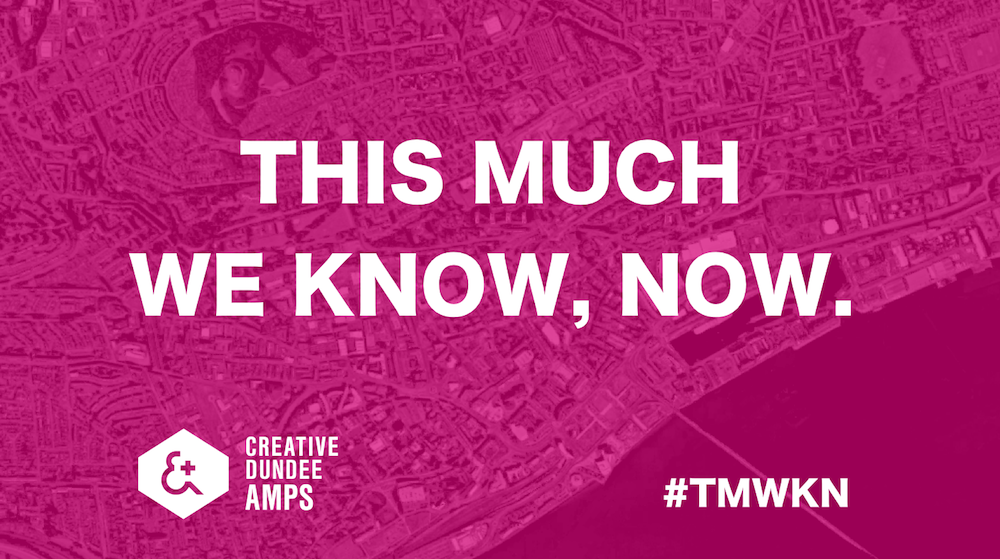 Dundee’s reputation as a global cultural destination relies on its strong creative community and the diversity of people who are passionate about making it a better place, revealing the city’s treasures to its citizens and to the world.

At This Much We Know, Now you will hear from a few of the many individuals who’ve made it happen over the decades, each talking about their own experiences, the highs and lows involved in shaping the city into the one we all know, love and continue to grow today. Join us in one of the city’s most iconic spaces, one week before V&A Dundee opens its doors and the city undergoes yet another significant transformation.

This is also a chance to take part in discussions about how we can continue to collectively shape Dundee’s future and share your ambitions for the city. Creative Dundee has created the Amps supporters project to involve everyone in supporting and building Dundee’s local creative scene, our communities, and the future of the city. Find out more about how to join the Amps Network here.

We’ll hear about Dundee’s impressive creative past and come right up to date – talking past projects and incredible developments made in Dundee, from Witch’s Blood, to Lemmings and Grand Theft Auto, Dundee Culture to Yuck n’ Yum.

We previously ran this TMWKN event back in 2013, which took us on a retrospective journey through Dundee’s creative past as we heard from Sheena Wellington, Amanda Lowson, John Harvey, Lorraine Wilson, Matthew Jarron, Lyall Bruce, Lesley Farqhuar, Chic Harper and Clare Brennan.

This Much We Know, Now // Amps Meet-up

Tickets: £3 or free for Amps Supporters.

*This Much We Know will be photographed and eventually shared on the Creative Dundee social media platforms. If you do not wish to appear in any of the images that are made public, please let us know at news@creativedundee.com

A huge thanks to our friends and fellow Amps supporters at Dundee Heritage Trust for hosting this event at Discovery Point. Check out the programme of events at RRS Discovery and Verdant Works, here.

Thanks to a generous contribution from someone in the Amps community, we will be able to provide free transport for anyone in Dundee whose disability impedes or makes it harder to attend this event. If that’s you, book a ticket and email us at news@creativedundee.com and we’ll organise an accessible taxi to take you to the event and back!

Fiona Miller is a highly successful and well-seasoned theatre director and theatre-maker who has worked in the arts in Scotland over the last 30 years – 16 of those with older people. She is the founder and artistic director of Tricky Hat Productions and is developing a performance company for people over 50, The Flames. Fiona worked extensively in the UK and beyond since 1984 from large-scale productions, Witches Blood in Dundee and City in Glasgow (European City of Culture 1990) both with casts of over 500, to 1 to 1 performances for National Theatre of Scotland’s “99…100” in Fife in 2010, and everything in between. She also works as an artistic consultant and trainer.

Mike Dailly started his career in games almost 30 years ago at DMA Design, where he helped make some of the most recognised games in the industry. From Lemmings to GTA to F1 to mobile phone games to GameMaker, Mike has created games for all manner of systems. His current job of making GameMaker Studio allows him to spread his experience to a new generation of game developers, helping them achieve their own dreams. @mdf200

Laura Cooney is a Community Learning and Development Worker based at The Corner, a Dundee-wide service that provides health and wellbeing support to young people. With over 15 years of experience, her role involves using art and media to engage and inspire; designing and co-producing projects with young people, sharing skills and ideas, building confidence and resilience. @TheCornerDundee

Ben Robinson graduated in Fine Art from Duncan of Jordanstone in 2004 and completed an MDes in 2007. He was Features Editor for Yuck ’n Yum from 2008 to 2013. In 2012 he wrote and directed the short film Death Paints Red Daubings for Generator Projects, then the following year created a YouTube project titled ART101 that was exhibited at the 2017 Filmwinter festival in Stuttgart. Find out more about Ben here and on Twitter: @benjackrobinson

Grant Ritchie is the only College Principal in Scotland with a creative industries background. He has developed a raft of creative organisations including the Space dance centre, home to the Scottish School of Contemporary Dance, the Gardyne Theatre, the Gardyne Youth Music Initiative, and the Creative Media Network Scotland of Universities and Colleges. A past Board member of DCA, he has worked for years to support young filmmakers, musicians and talented designers in Dundee to have an entitlement to train and develop in world-class facilities in their own region.

Stewart Murdoch holds the post of Director for Leisure and Culture with Dundee City Council. This remit includes the role of Managing Director of Leisure & Culture Dundee. Stewart’s background is in urban and regional planning, community development, and project management. These are the things that have kept him in Dundee for 23 years after his 5 year contract ended!