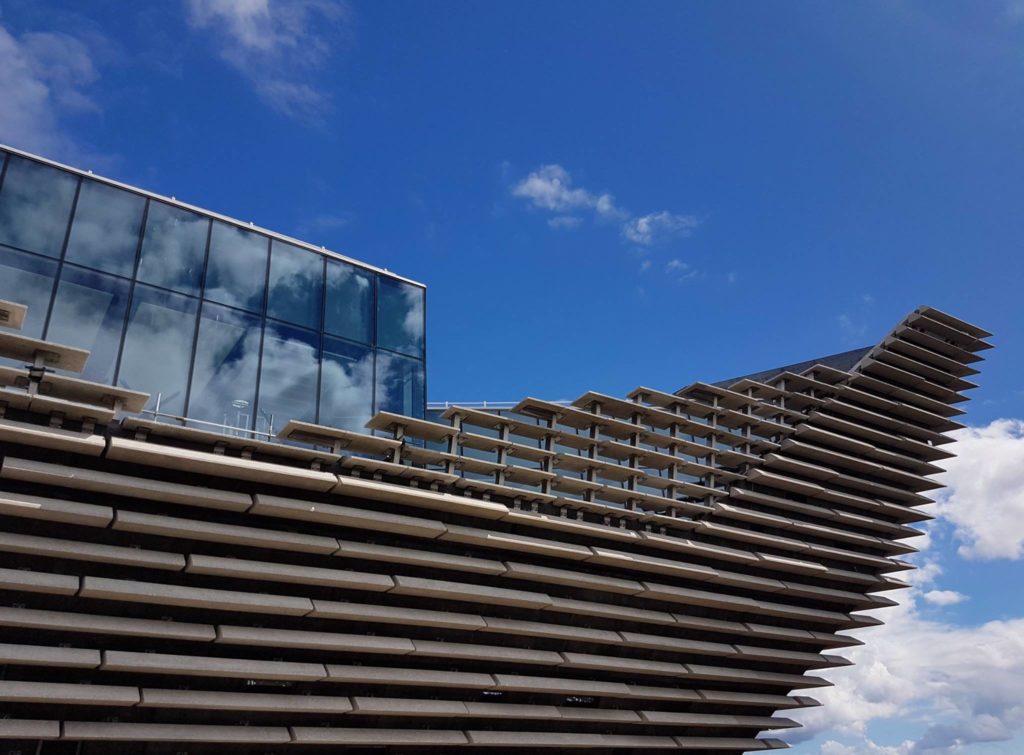 As anticipation builds for V&A Dundee opening this Saturday 15 September 2018, we like everyone else, are looking forward to the building finally being open, visiting and starting Dundee’s new normal!

From the outside, it might look like the organisation has landed here overnight, however, their relationship with Dundee has been over 10 years in the making, very much developed in Dundee. For great background histories about the project which cover ‘why Dundee?’ Check out these great posts by BBC and University of Dundee.

Creative Dundee has enjoyed working with V&A Dundee’s team on a number of projects over the years. They worked with us back at a time when we were no more than a blog, and it’s crazy to think they didn’t even have their own website at that time! Here we look back at some of these activities and look forward to many future collaborations.

For full info on this weekend’s activities check out – Saturday at Slessor Gardens is totally free and non-ticketed, see the programme here and the 3D Festival can be watched on BBC2 Scotland details here and if you want to explore the city whilst visiting, check out our 99 Things to See and Do Dundee Guide.

Back in February 2009 was the first time Creative Dundee covered V&A Dundee on our website. A feasibility study had just been completed and the findings were shared at a University of Dundee conference open to the public to attend. Since then we’ve featured lots of V&A Dundee content. Here’s that first post, when times were very different in the city….

Director of V&A Dundee was the very first speaker at our very first PechaKucha Night in Dundee, Philip had only been in post a matter of months. This was also one of the first public outings for V&A Dundee and we were a bit nervous that no one would come along to that event with the funny name, but we were delighted that 150 people joined us! Now 7 years on, PKN has grown to be one of the most popular event nights in the city. Watch Philip Long’s talk here.

We were delighted that Lead Project Architect, Maurizio joined another Pecha Kucha Night in Dundee to speak about how the project was progressing, and by this time it was all beginning to feel very real, excitement was building… Watch Maurizio Mucciola’s talk here. 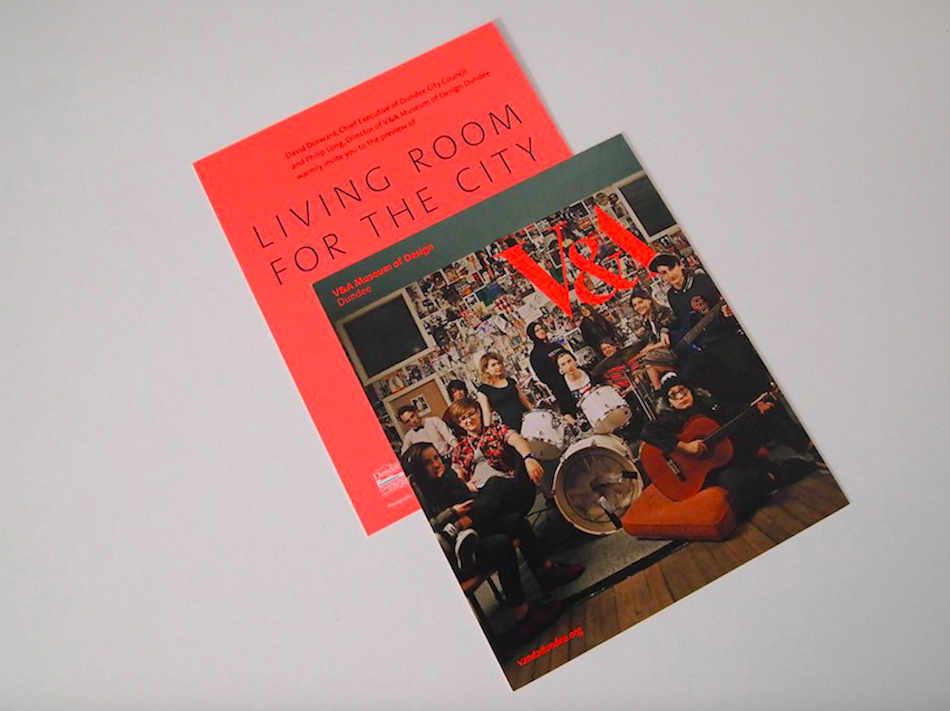 In 2013 we supported V&A Dundee to launch an open call to find the first designer to design their first ever community engagement project, Living Room for the City. We hosted it on our website, as they didn’t actually even have a website at this stage – hard to imagine now. This was also Creative Dundee’s first ever proper contract to manage and run this initiative, which was a big deal – full of firsts! Read more about this open call here.

Dundee born Martin Baillie was selected to design the campaign materials, alongside photographer Ross Fraser McLean – who both still work with V&A Dundee on a regular basis today.

The name of the project was inspired by V&A Dundee architect, Kengo Kuma, who has described his vision of the building as a “living room for the city”. Through the project, V&A Dundee invited everyone to share photographs of their living rooms and favourite things. Read more about this project here.

The giant comic strip‎ which illustrated design across Scotland at the waterfront construction site of V&A Dundee by comic illustrator Will Morris and graphic designer David Mackenzie, has been in place for the last couple of years as the building has risen from the ground. Creative Dundee, Creative Edinburgh and TAKTAL were invited to create the design shortlist for V&A Dundee. Read more about this project here.

Following the Small Society Lab, which we ran and connected Dundee to Mexico City over a weekend, which we worked on in partnership with V&A London (read more about this partnership here), we were invited to showcase a digital innovation at V&A in London’s Digital Design Weekend, during London Design Festival.

Biome Collective showcased their project Killbox and also a City GIF Wall, show the city’s vibrancy and personality in a visual and accessible way. Following a call for GIFs, we received hundreds of GIFs which were included in the Wall and shown as part of V&A’s Digital Design Weekend in London, part of London Design Festival 2015. Visit the City GIF Wall, which still just about works after all these years! 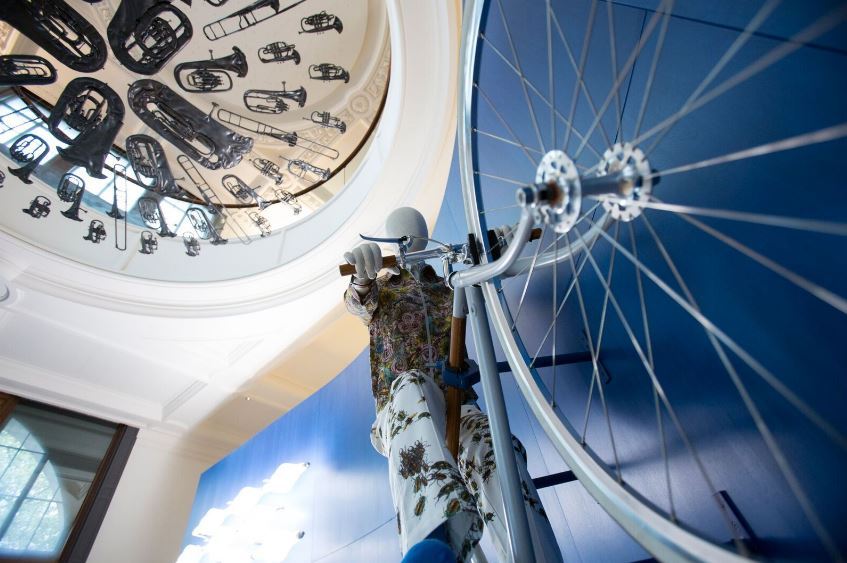 Creative Dundee was invited to visit and walk around the construction of the building, and we live streamed our way around, which was viewed by over 20,000 people around the world – there was a lot of interest in the building! You can watch the shaky cam video that we didn’t expect to be allowed to film, here!

Of course, V&A Dundee features within our guide of places to see and things to do in Dundee, crowd-sourced by people who live here and love it, they are in at number 99 and took this with the good humour it was intended, and are distributing copies of our guide throughout their opening weekend. Find the 99 Things Guide here.