Dundee and Mexico City came together last month to run simultaneous events in each city to share a connected crossing of cultures. Over 30 people joined us at Small Society Lab in Dundee to explore the city – the streets, design, food and culture – and connect with artists, designers and technologists on the other side of the world.

Groups remixed aspects of both cultures to design collaborative, experimental and playful digital tools which considered issues relevant to city life; such as civic engagement, the environment, the high street and food production/waste.

Here’s a brief overview of what happened over Small Society Lab and look out for details of each of the 6 projects and prototypes designed and developed over the 2 days, coming here soon.

Thanks to Graham Black for the brilliant photos over the weekend, some below and the full album can be viewed here (thanks also to Ross Fraser MacLean for sending on some included in the album also). You can see all the social media stories here.

Projects and prototypes developed during SSL:

Day 1, noon – we met in DCA’s Visual Research Centre, our base for the 2 days, had some lunch, introduced ourselves and looked over the huge number of photos and films which had been submitted in the crowdsourcing call from Dundee and Mexico City (thanks again to everyone who did this – it was great inspiration – more on this to come soon!).

Collectively we drew the city – highlighting the good and not so good places – and then we took to the streets to check them out, the cutties/pends (alleys) which have almost been long forgotten. Some of the group went up the flag tower above Brew Dog/Fleet Collective to see the city from a different perspective; whilst others wandered through the ancient Howff cemetery and popped into optical boutique, Spex Pistols. Throughout the afternoon we Periscoped and tweeted about our experiences… 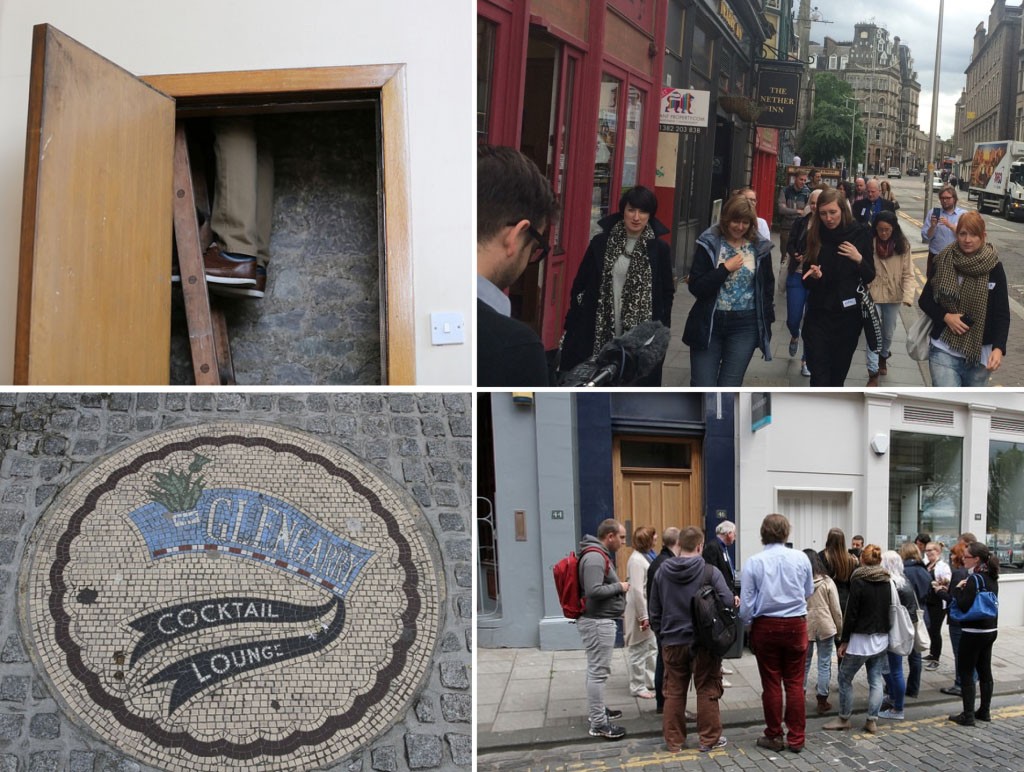 Back at the ranch we began exploring some key themes and small teams started to form around the seeds of ideas, conversations and discussions. Talking turned to action and the walls were taken over and turned into massive sketchpads. 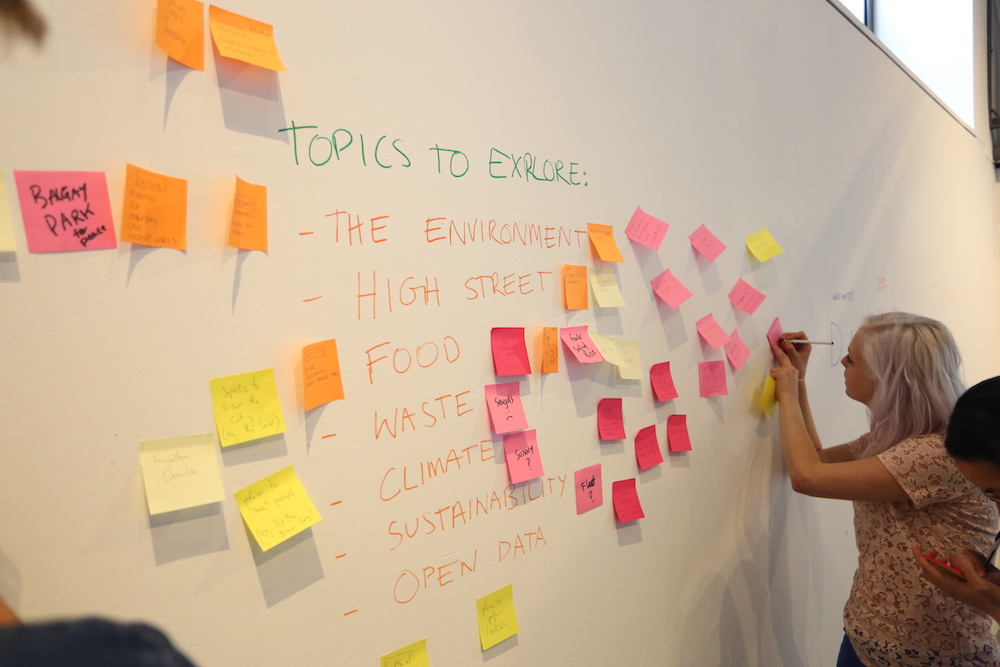 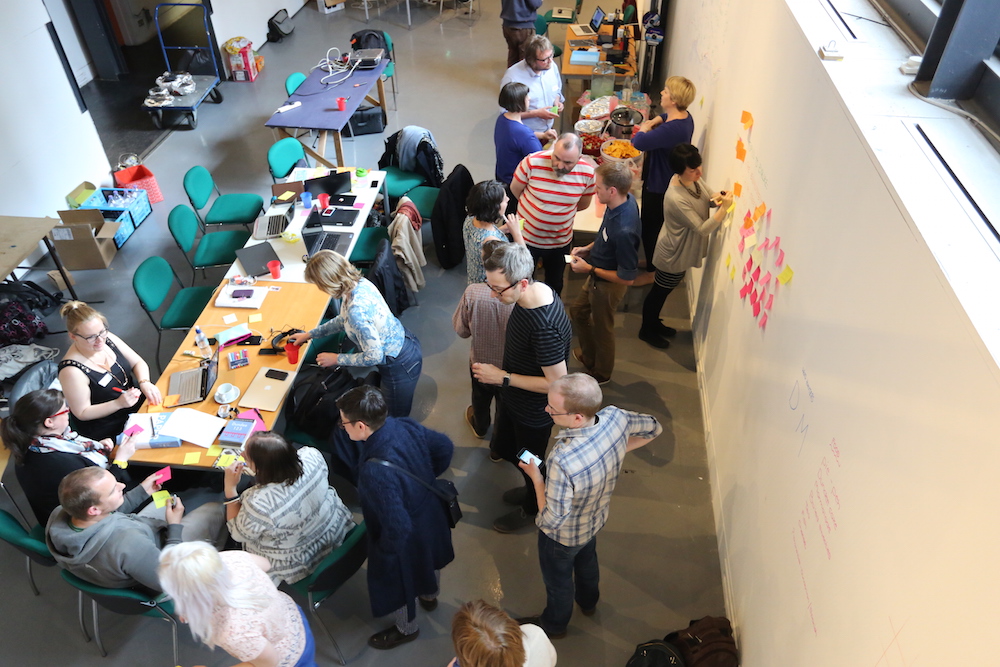 Day 1, late afternoon – Laptops, analogue tools and gadgets came out, groups went out to explore more, the music was turned up and there were really positive Friday afternoon vibes in the VRC space. Mountains around Mexico City and our own Law started popping up in 3D form before our very eyes!

A theme began to emerge as coincidentally a number of groups started exploring how to make the city more engaging and playful… Consideration was given to how the city was positioned, communicated and connected, to visitors and locals alike. These thoughts and actions on urban design and digital interaction in the physical domain were great to see, given the massive transition Dundee is currently undergoing. 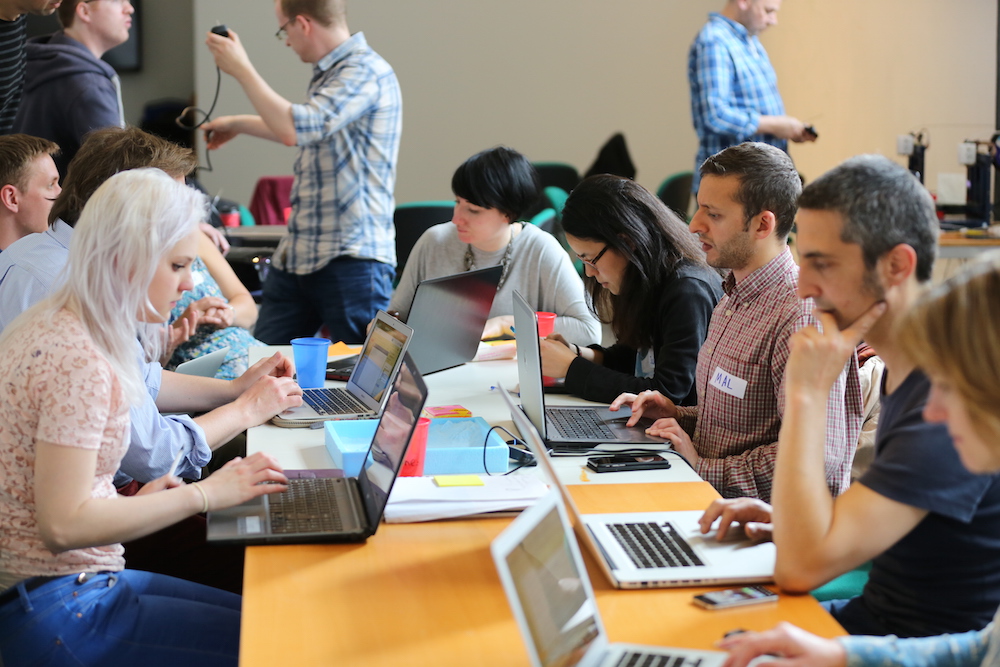 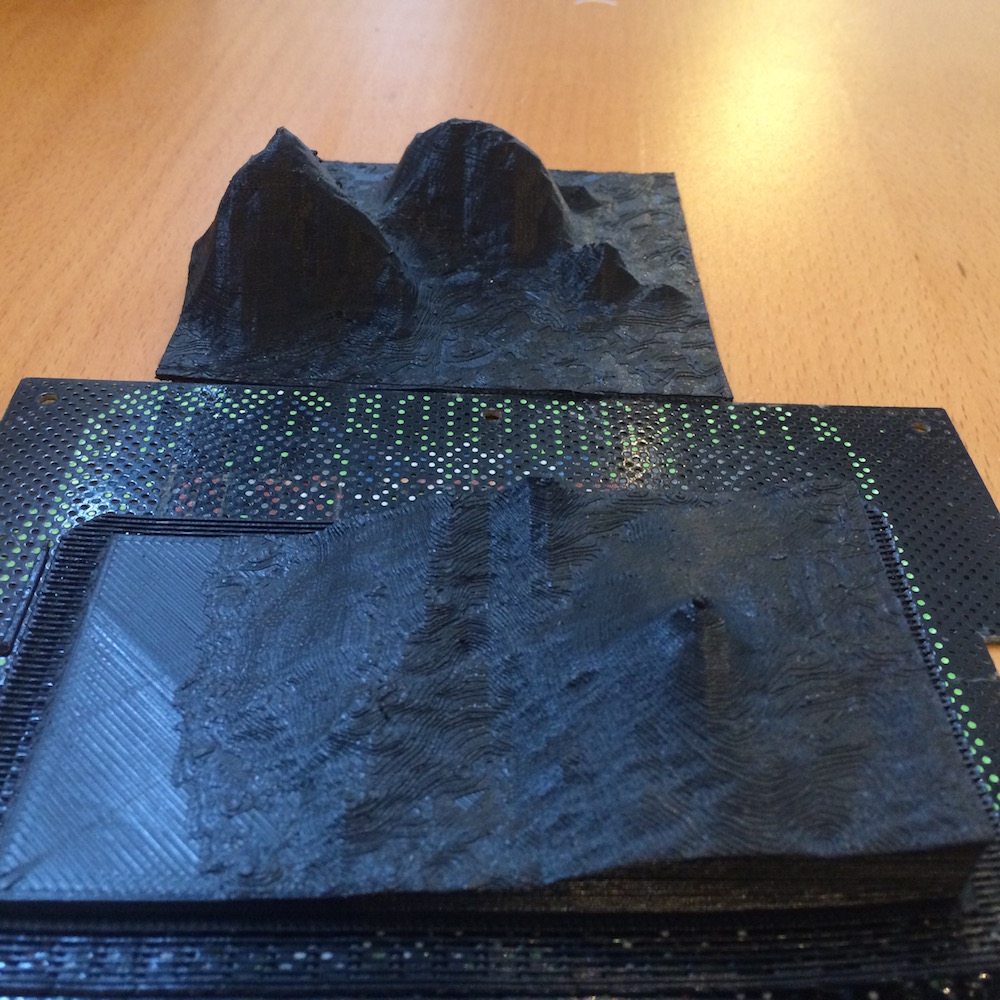 Day 1, 7pm – Following some connection tests with Mexico City, we were ready to go – the team were really friendly and welcoming and keen to hear all about Dundee’s creative community and the UK’s creative economy which a few of us got involved in responding to their questions. It was nice to see some familiar faces on the other side of the world, as Dundee’s own Jon Rogers from University of Dundee, who was a key part in making the connection happen, was out there. It was a bit odd for us as we had finished our first day and the group there hadn’t really yet started (they are 6 hours behind us), they’d just returned from their walking tour in Mexico City. 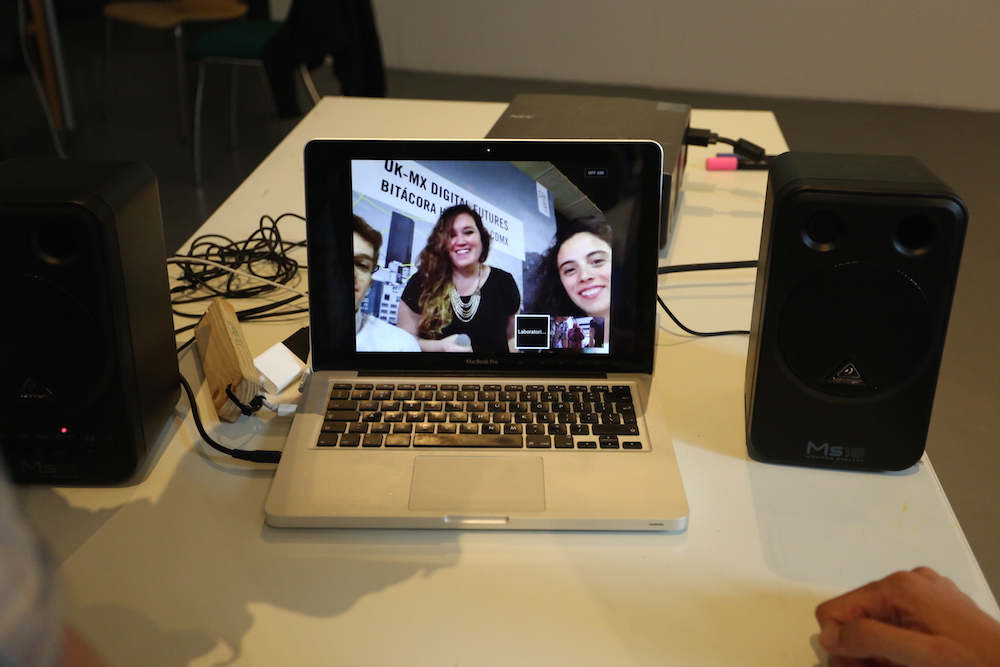 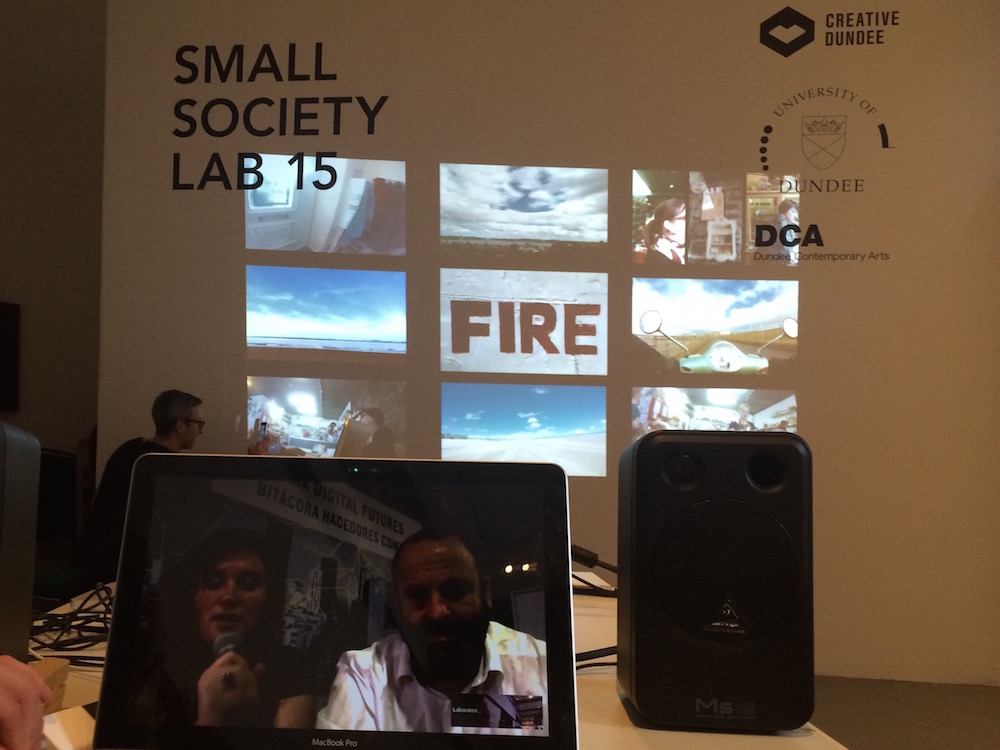 Mexico City sent us a photo of one of their buildings they’d passed on their walk and we were spooked about how similar it was to Dundee’s Fleet/Brew Dog – so we let them know! 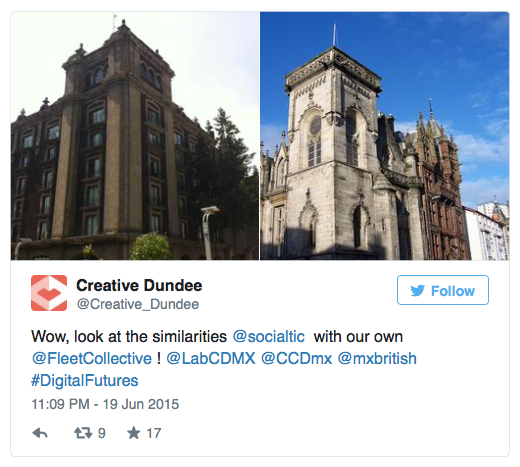 Day 2, AM – people came back bright and early (which we were delighted by given it had been quite a late night the evening before) and got back to developing their prototypes. We had more great food at lunch time and then were joined by local storyteller Ken Johnston, of Blether Tay-Gither (who meet on the last Tues of every month, everyone is welcome) who told us some tall tales which were both hilarious and unrepeatable to the human ear ever again. The room was full of laughter and sore faces after he left, which was what was needed to get through the extra long day. 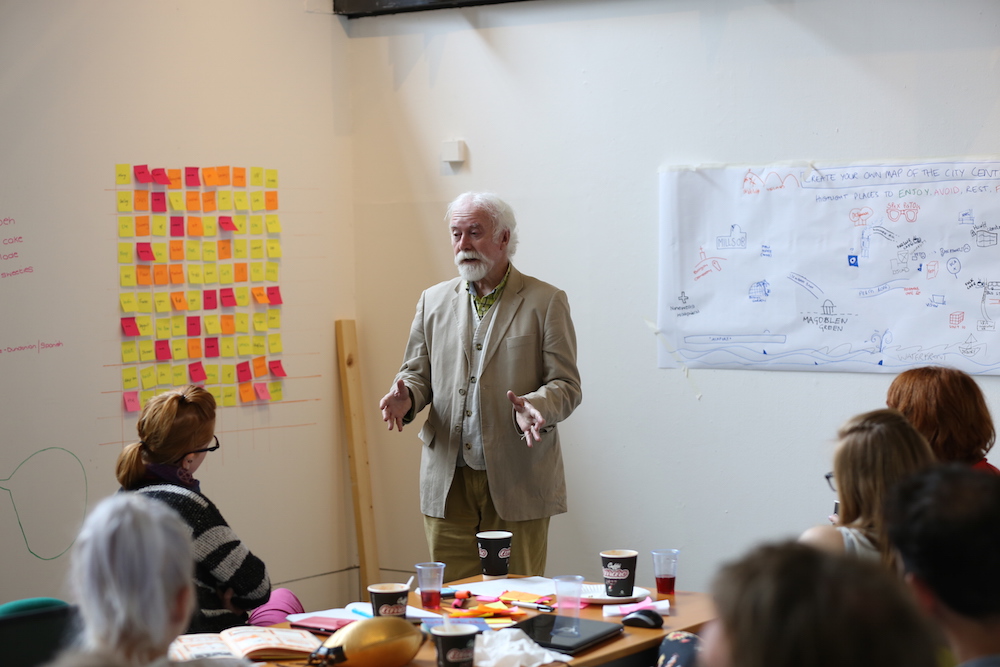 Teams worked hard throughout the afternoon, knowing that we were tuning back into Mexico City at 7pm (their 1pm) and we’d be joining them with (even) more great fusion food to talk through what we’d been exploring and developing. We took the chance to get a group photo before tucking into Ms Battenberg’s delicious delicacies, pictured below in glorious technicolor! 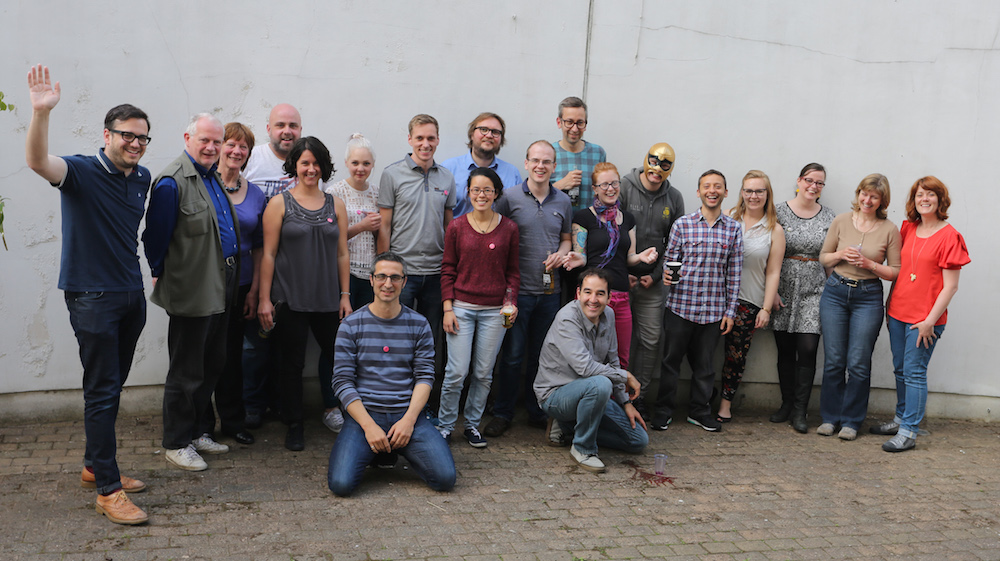 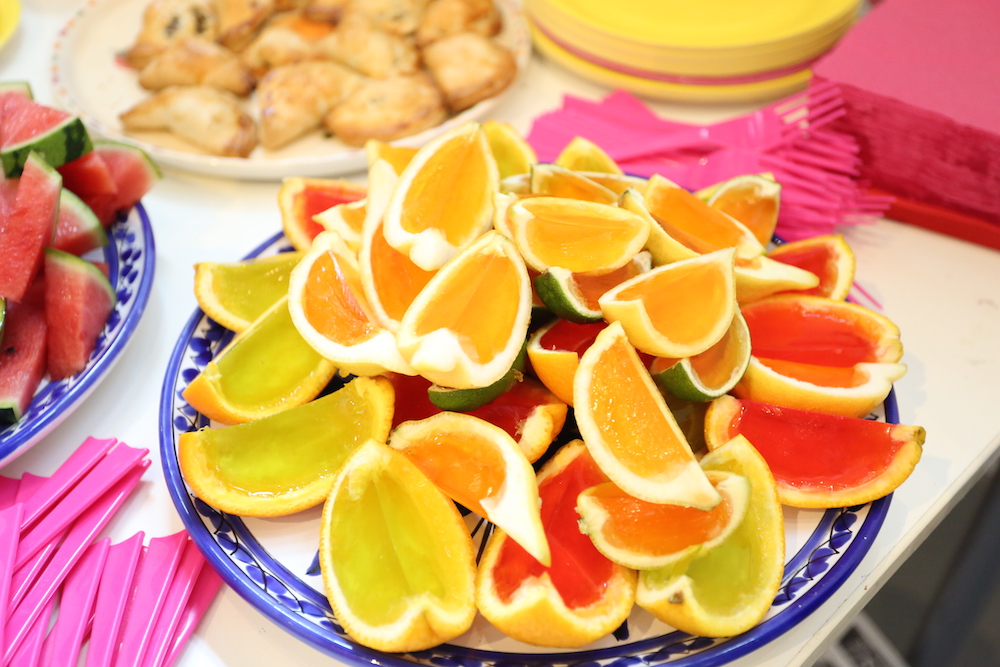 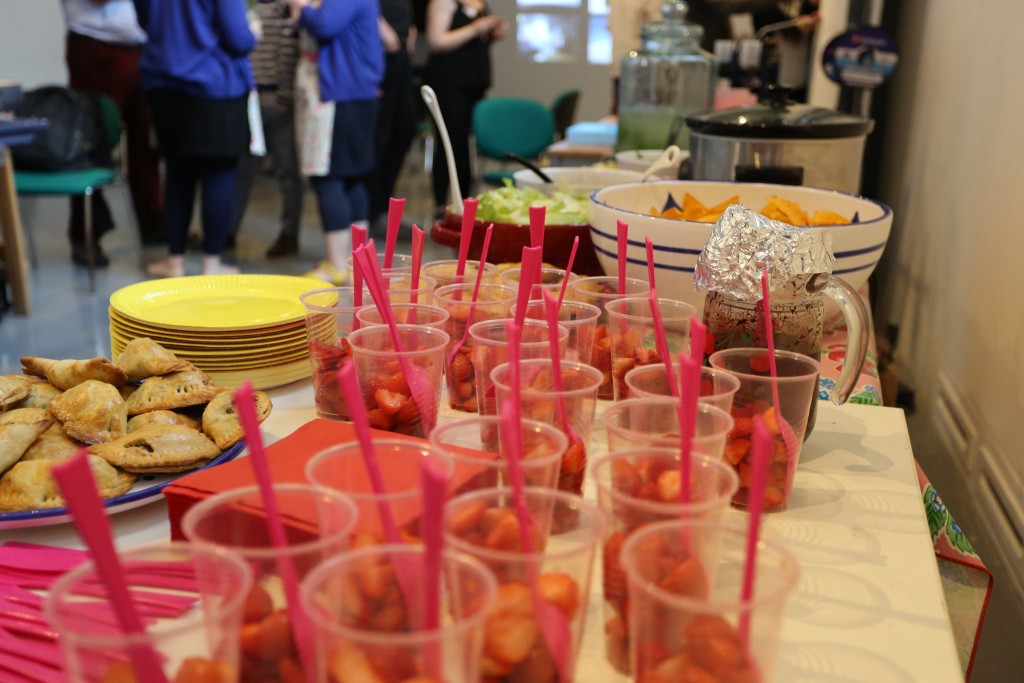 Day 2, 7pm – We settled down to connect with our friends again and both cities got a great taste of Dundee – watching a short film featuring a lot of the crowdsourced content (revealed next week!) and made in the 2 days. The film gave a great insight into what Dundee is all about. Mexico City started a Mexican wave which stretched from there to here – but even though we’d practised it beforehand, it wasn’t really our best moment of glory! 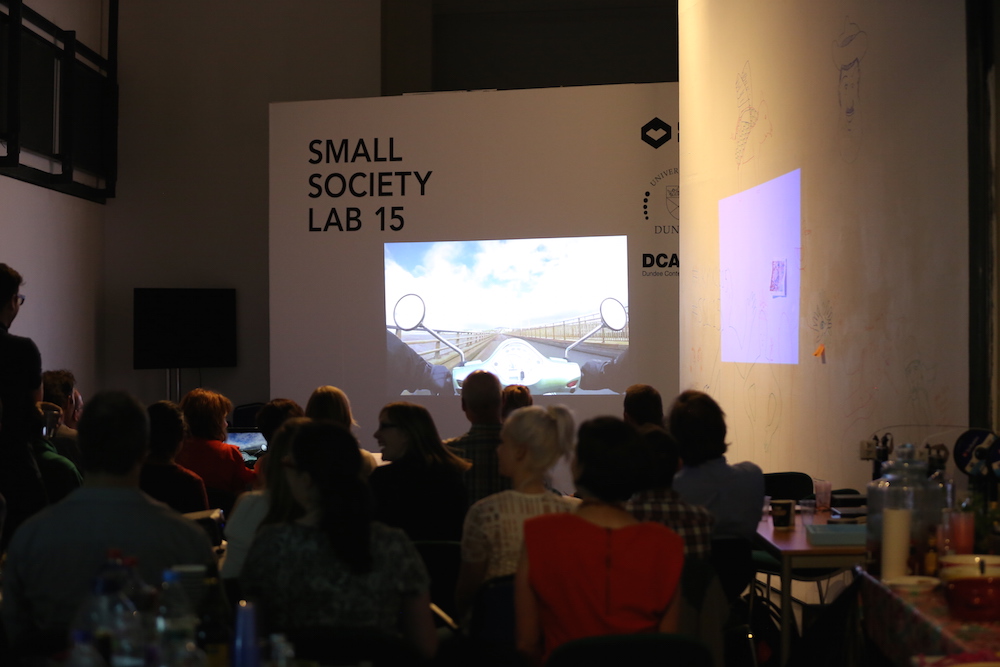 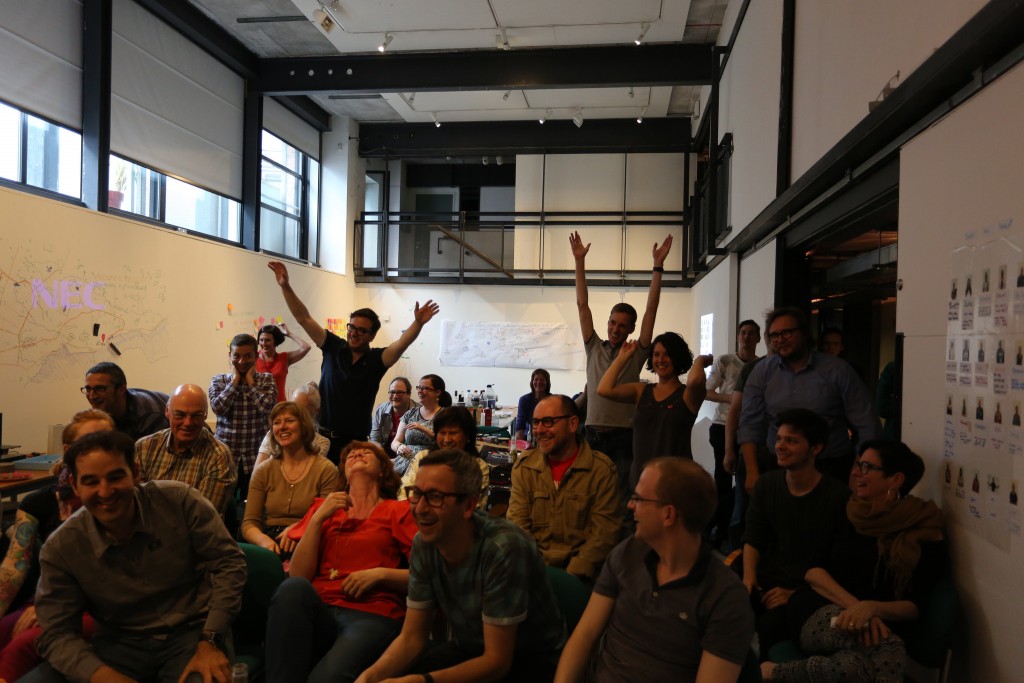 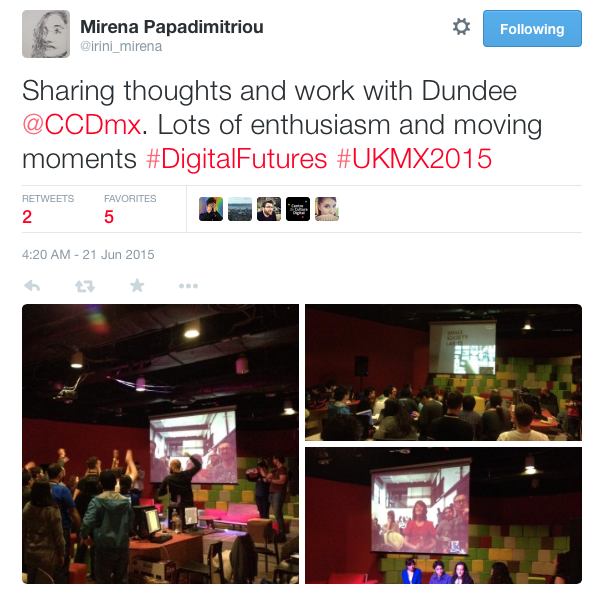 We took Mexico City on a tour around our space and heard from the teams who had been working on their ideas and prototypes – there were laughs, slight blips and although the sound quality of the connection wasn’t always great, we made it through happily.

This was definitely aided by having some fantastic people in Dundee who helped translate at points over the weekend –  we were joined by Urbano (and his cousin/brother), Mayra and Omar who were all originally from Mexico. Omar drove 2 and a half hours from south Ayrshire to Dundee to be with us and he found out about Small Society Lab from the e-newsletter he still receives from his home city in Mexico – how’s that for being a globally connected small city?! 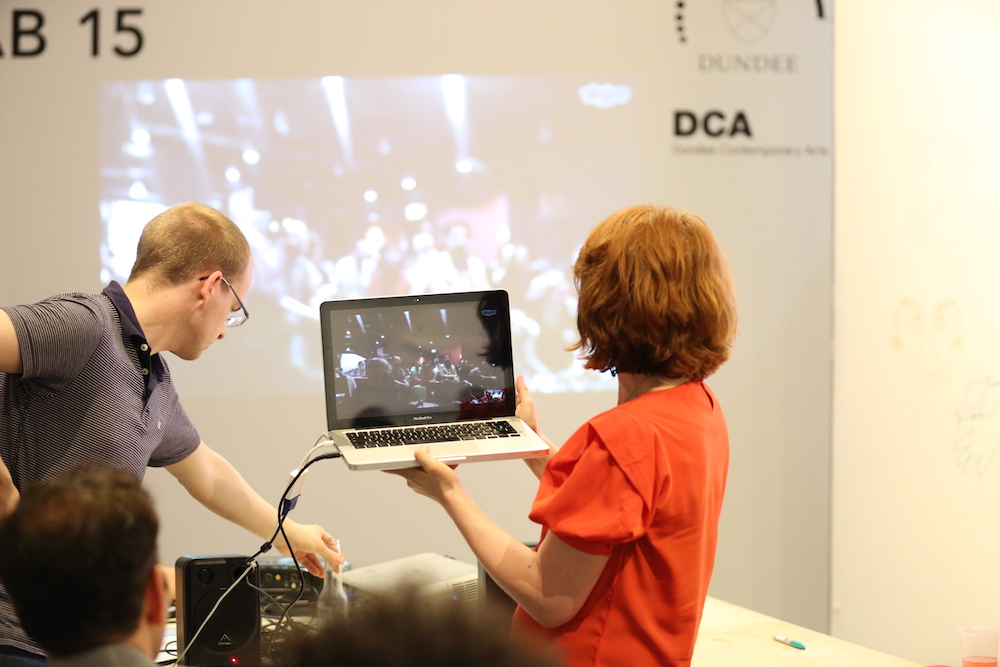 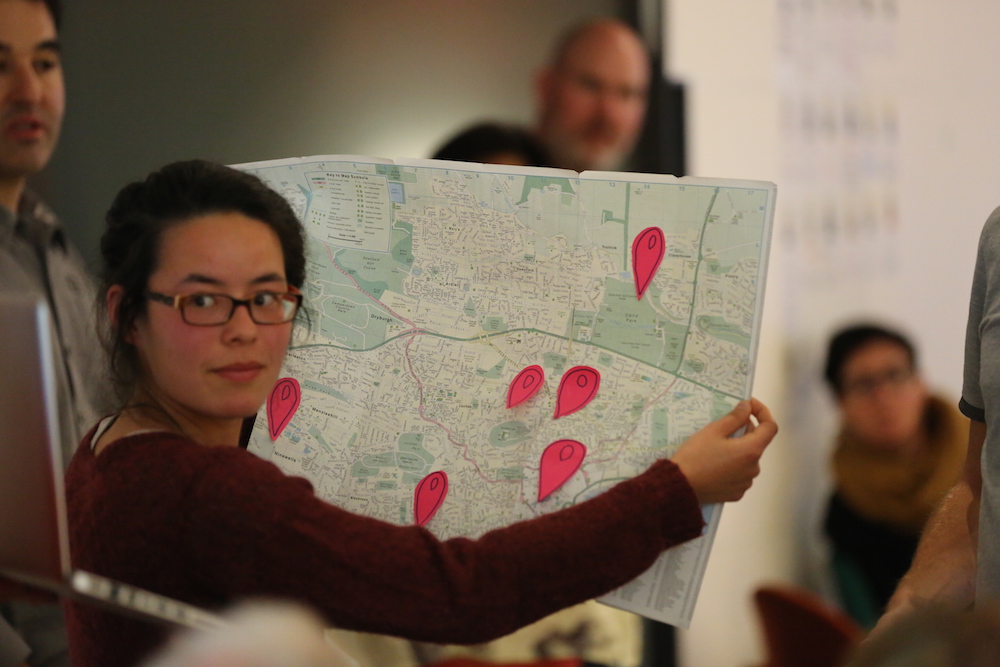 We then got to hear about the teams’ ideas in Mexico City and although they were quite a few hours behind us, it was impressive to hear how far their thinking had got to. We heard about a number of games based ideas, which was fascinating to hear about given Dundee’s own particular strengths.

As one of the organisers it was quite simply a brilliant experience. Cities of all scales around the globe are are trying to address big social issues of poverty, growth and sustainability, whilst also making them more enjoyable and inspiring places to live in. There is huge potential for creative people to play a leading role in shaping the future of our cities; and as both Mexico City and Dundee have well established design and maker communities, it’s been a great way of demonstrating what’s possible in a short space of time.

This is the start of this journey for us and we’re already discussing what comes next, both in this partnership with Mexico City and other cities around the world.

They say size isn’t everything, but maybe it is? Smaller communities/societies can mean tighter connections, an ability to be responsive and get stuff done without too much bureaucracy. Working with incredibly talented people based here in the city and beyond has only gone to further our belief in the potential of the city (if that’s even possible!) and that small is most definitely beautiful. 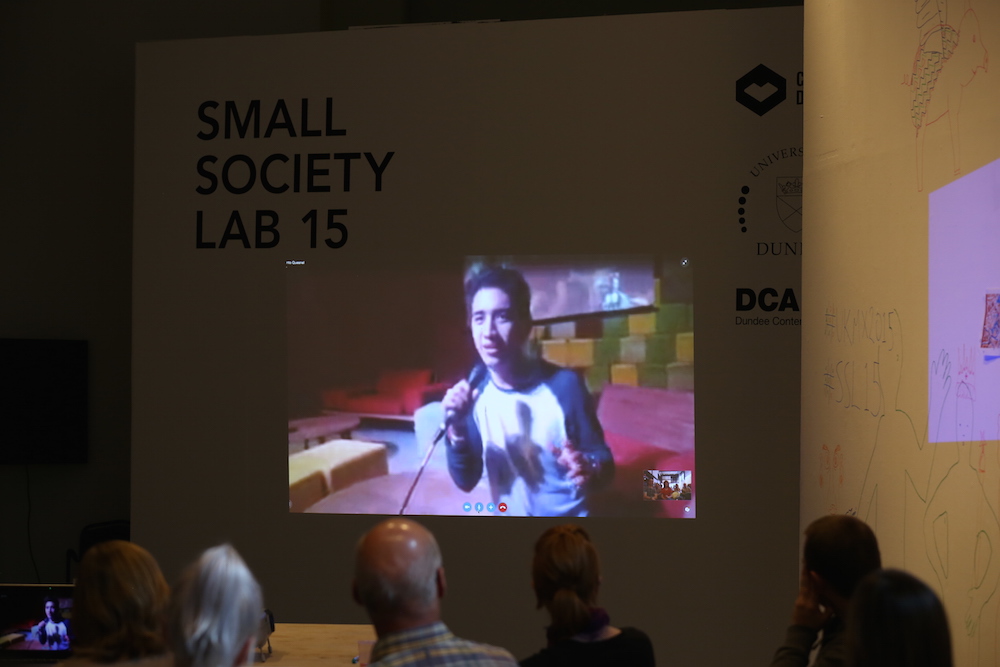 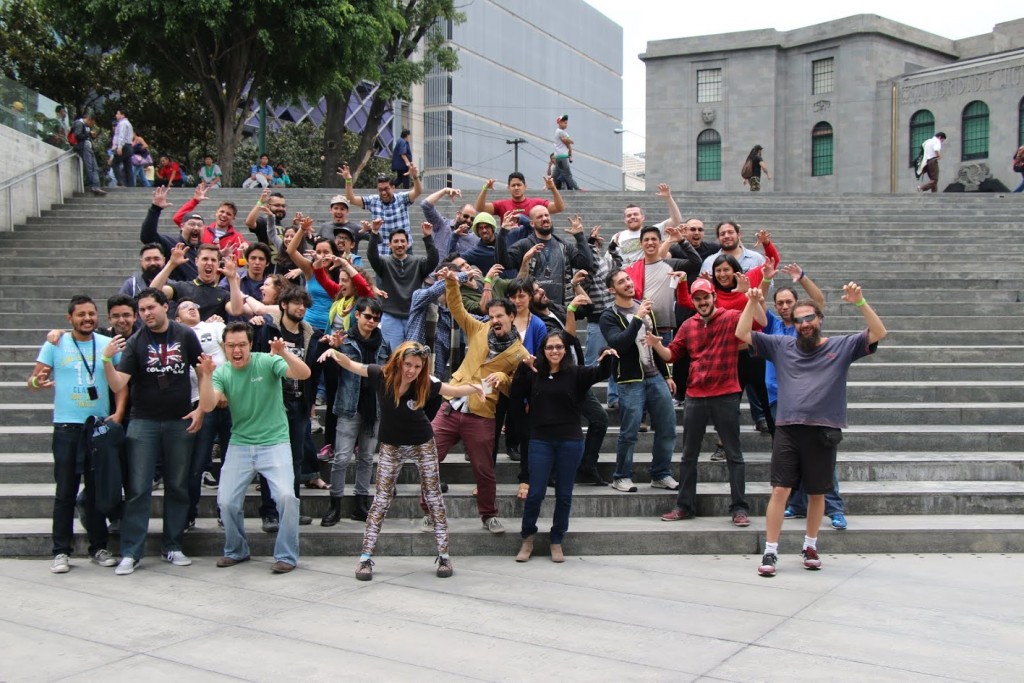 The Small Society Lab is an open project in Dundee, the UK’s UNESCO City of Design, which explores the development and understanding of the small city of the future. The Lab, now in its fifth year, is a partnership between Dundee Contemporary Arts, the University of Dundee and Creative Dundee. You can read about previous year’s activities here.