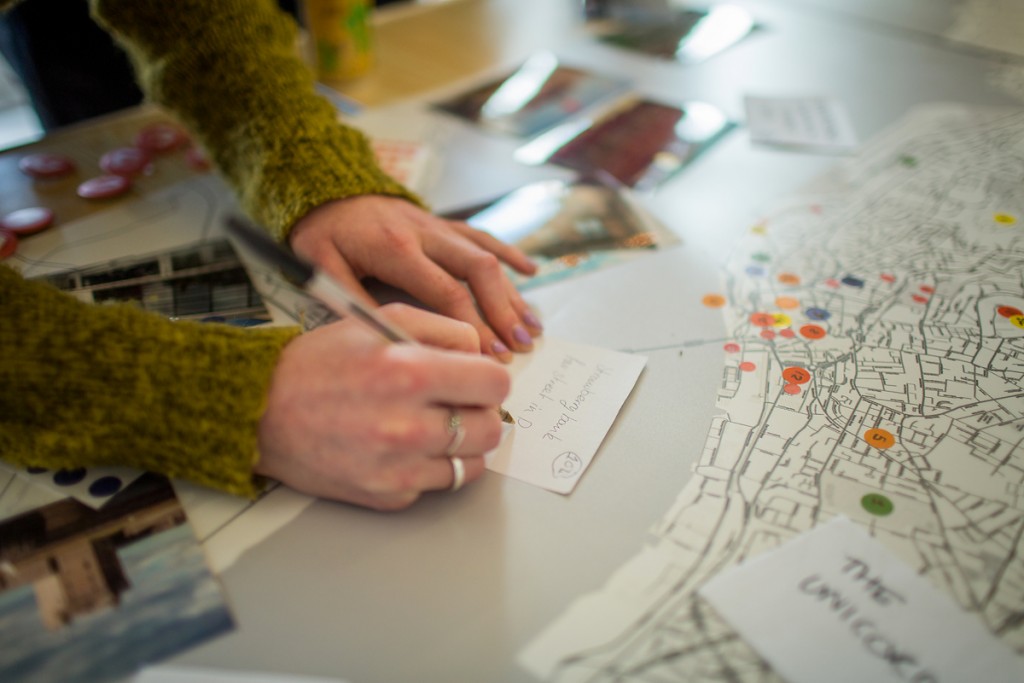 On Friday 13 November 2015 in Perth, the Scottish Government held the first Cities Convention. Citizens and policymakers came together for a packed day of talks, workshops and discussions, to enable better understanding, improved policy and greater empowerment of communities.

I took part in the day, aiming to get a glimpse of the bigger picture and take inspiration from other cities on themes such as finding creative and innovative solutions to tackle some of our common challenges, raising the profile of our cities, retaining creative talent and attracting investment.

During the morning session, John Swinney MSP, Cabinet Secretary for Finance, Employment and Sustainable growth, spoke about the role cities play in delivering inclusive economic growth in Scotland, emphasising that collaboration across cities for inclusive growth was better than competition. He described the Government’s economic agenda – its priority is tackling inequalities to four approaches: internationalisation, innovation, inclusive growth, and investment in infrastructure.

What I took from John Swinney’s contribution was the necessity of, and drive to:

For me this final point caught my attention most, thinking about Dundee’s recent acknowledgement, being designated a UNESCO City of Design. As the city has this new purpose, how do we get everyone involved in this new narrative?

Dundee was named UNESCO City of Design, the only in the UK in December 2014.

Chancellor Andrew Burns, Chair of the Scottish Cities Alliance and Leader of City of Edinburgh Council, highlighted us with some estimations about Scotland’s seven cities:

The Chair of the Scottish Cities Alliance said: “We need more freedom to design our cities, more collaboration between local investment and local growth. […] we are not going to agree on all the details, but we need to design common objectives.”

After those formal presentations (and more political chats), we divided into small groups of discussion. Taking the example of Stirling, Dundee and Aberdeen, we discussed about the challenges of engaging and empowering our communities. How to get as many people as possible behind a common vision/purpose when we already face so many obstacles trying to bring people together in the same room, or when trying to engage with all on a common digital platform of communication? Questions such as how to help our communities to make informed decisions, to take responsibilities for the improvement/ development/ maintaining of our community assets, or to design creative and tailored solutions?

In Dundee, a local example is Small Society Lab which explores the development and understanding of the small city of the future – a partnership between Dundee Contemporary Arts, the University of Dundee and Creative Dundee. During this June’s lab was developed Follow Me!, a community engagement project designed to develop citizens’ awareness and pride of their local cultural assets, which was launched in Stobswell last summer. 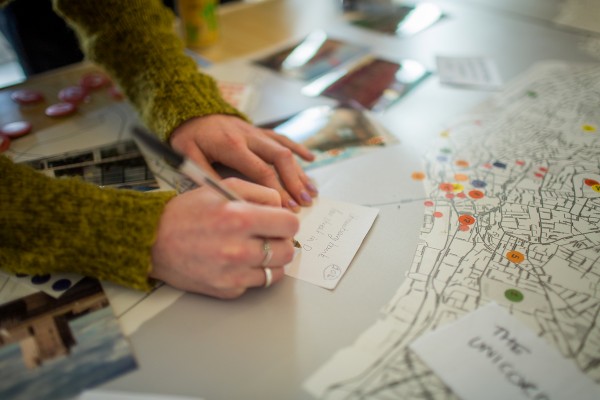 Follow Me! is a community engagement project connecting people, places and stories from around the city and was developed during Small Society Lab 2015, Dundee.

We also heard from two inspirational speakers, Gorka Espiau from Bilbao movement building and Rachel Brown on creativity and collaboration.

Gorka Espiau talked about how to (re-)build a city through the example of Bilbao, a major city in the province of Biscay in the autonomous community of the Basque Country in Spain, which was forced to rethink its very economic foundations, after the dramatic industrial crisis of the 1980s. Mainly based on the exploitation of the iron mines, which encouraged maritime traffic, port activity and the construction of ships, the city transformed into a successful service town.

Gorka explained that the city of Bilbao was transformed through innovative its social economy before its famous architectural symbol was built. This colossal project was embedded after the local economy was working. He talked about the importance of incorporating people and narratives in innovative change, and also moving away from a ‘delivery’ process mindset to better include failure and flexibility into processes. 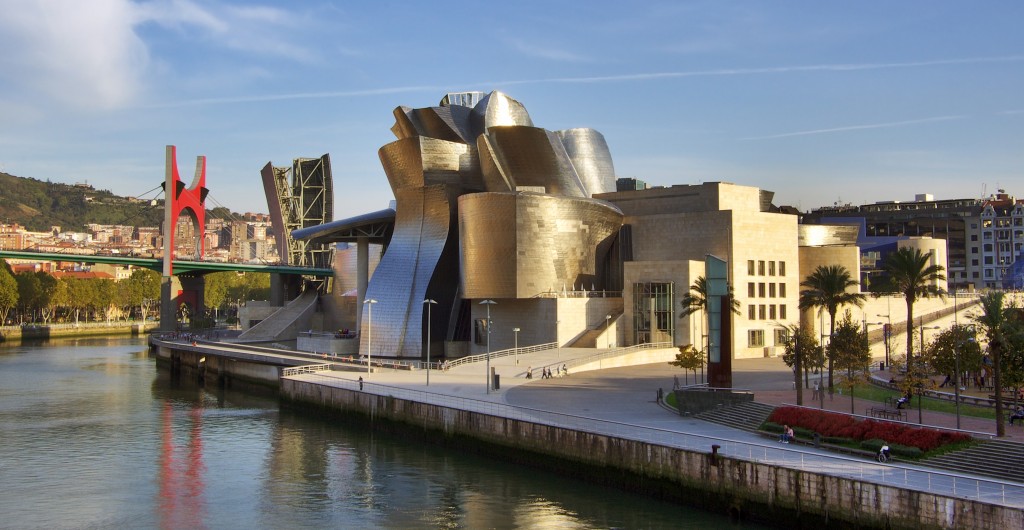 (Read previous post on the subject here: Our creative soul – from Bilbao to Dundee)

Rachel Brown talked about the importance of putting things into context, creating a people climate in businesses and vice-versa, a businesses climate in social enterprise, incorporating our values into what we do and celebrating risks.

“Being an entrepreneur is to be engaged and passionate!” – Rachel Brown

At the afternoon session, we had to choose between 4 labs :

Though all those themes were of huge interest, Innovation seems an evident choice for me!

First, we heard from David Martin, Founder and Creative Director of Hidden Doors, an independent arts festival which takes place in abandoned or hidden places in Edinburgh. It’s with the sentiment that local artists are struggling to grow in their own city, to find their public, that David and other artists started this project. In addition to bringing different art forms together and re-invigorating abandoned buildings in the city, the festival’s purpose is to create a space/ time where the public could connect with grass-rooted artists and to offer the second a stepping stone to establish in their home city.

Two well known initiatives in Dundee – Tin Roof Collective and GENERATORProjects – are leading the way in the city. Those organisations are both fostering and nourishing grass-rooted artists, offering vitally needed affordable infrastructure and supportive networks for up-and-coming artists to experiment and meet the public, but a challenge all artists led spaces/ festival face is doing all of this with little/ no support. 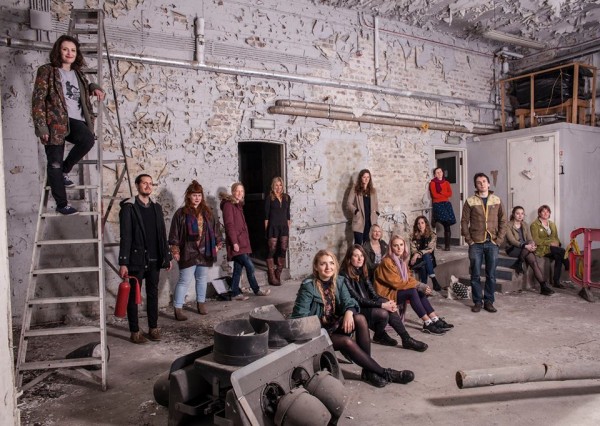 The second story came from Glasgow, where the focus is on local economic growth. Where about 50% of the small businesses stop after 5 years of trading, Glasgow and the Clyde Valley City Deal was designed to support the local area – comprised of eight local authorities – to achieve its shared long term vision for the local economy. The key elements of the City Deal are:

While we all agreed in the room that innovation is key for a more collaborative and inclusive change, are we truly innovative, or only joining-up? Bringing people together, taking inspiration from others and creatively stimulating each others – is that being innovative? Innovation means what’s not been done before, so the most efficient way to foster innovation is by encouraging and supporting risk taking – and by way of consequences, incorporating failures as part of the process.

As support is better designed as a whole, not only infrastruture, research, training and mentoring are used to stimulate innovation (in the ultimate aim for sustainability), but it also takes a bunch of dedicated people to try new approaches to innovation.

At the end of the day, 4 listening ambassadors (including myself) had been asked what they took from the day and what they would like to see happen in the future. These are some of the comments:

I look forward to continuing the discussions.

Back in 2011, the Scottish Government launched an inclusive economic growth strategy, with the aim of working closely with Scotland’s cities and regions: the Agenda for Cities established the Scottish Cities Alliance, a partnership between Scotland’s seven cities – Aberdeen, Dundee, Edinburgh, Glasgow, Inverness, Perth and Stirling.

Since they are planning to refresh the strategy in 2016, they held the Cities Convention on Friday 13 November 2015 in Perth, which was open to anyone to attend for free. Citizens and policymakers came together for a packed day of talks, workshops and discussions, to enable better understanding, improved policy and greater empowerment of communities.