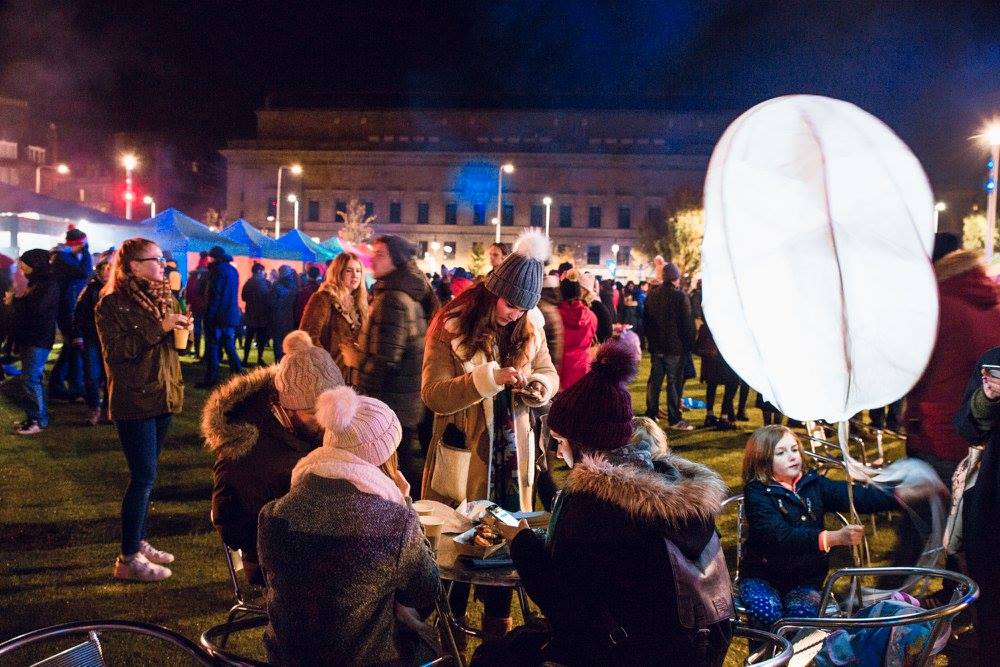 Each year Scotland has a specific focus theme designated for events and activities happening across Scotland, led by Scottish Government alongside Visit Scotland and other partners. 2016 was Scotland’s Year of Innovation, Architecture and Design – an exciting opportunity for Dundee, which was declared the UK’s first UNESCO City of Design back in 2014.

As design, architecture and innovation were key themes of the year it’s perhaps no surprise that Dundee created a huge number of events and festivals which celebrated the year throughout 2016.

Before we head into 2017 (the Year of History, Heritage and Archaeology 2017), we thought it would be good to reflect back on some of Dundee’s many (there were many more) highlights of the year’s events and activities! We’ve included some of 2017’s events to look out for also below. 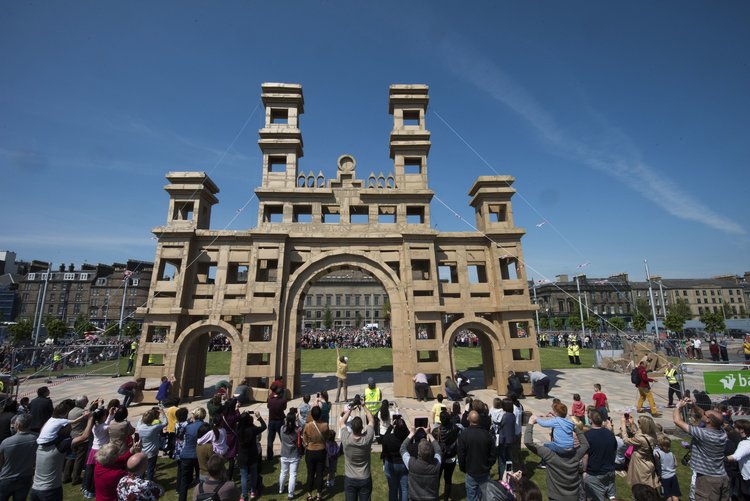 One of the most talked about events of the year, The People’s Tower, Dundee Royal Arch saw hundreds of people build a giant temporary public art project recreating Dundee’s Royal Arch out of cardboard boxes!

Creative Producer Claire Dow was responsible for making the project happen, bringing Olivier Grossetete and team to the city and leading the partnerships with Dundee Institute of Architects and a number of sponsors. (Event: 28-29 May 2016). The People’s Tower was part of the annual Ignite Dundee month long cultural festival, which saw a number of events happening celebrating visual art, design, craft, performances and degree shows across the city. Read more on this from our archives here. 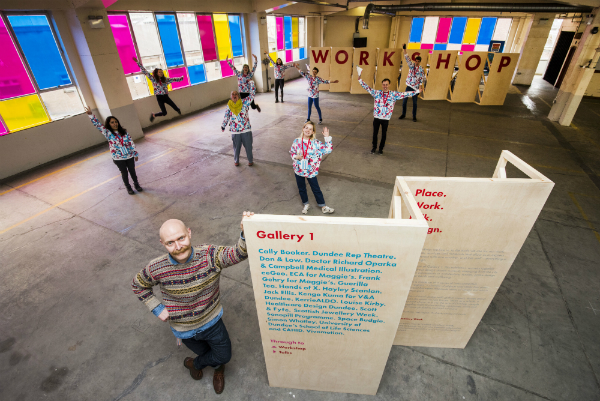 The theme of the festival was ‘Place. Work. Folk. Design.’ through which the festival explored the potential of design to connect communities and improve everyday lives. This integrated view of the city freely borrows from one of the most famous and fundamental principles of Sir Patrick Geddes (1854 – 1932), the world-famous Scottish town planner and professor at University College Dundee for 30 years.

Over 7,000 people visited the festival at West Ward Works held within three galleries and a screening room, all located in the vast building. The exhibition showcased work and projects by more than 30 different designers and the events programme contained 25 different talks, workshops and performances. (Event: 25-28 May 2016). Read more on this from our archives here. 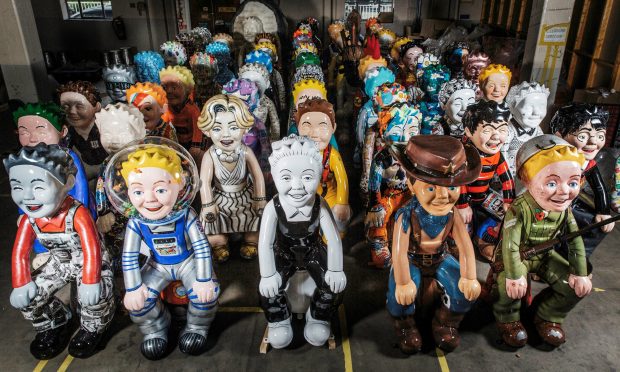 Without doubt, another of the most popular events of the year in the city! The Oor Wullie Bucket Trail saw over 50 unique Oor Wullies, designed by artists from across Scotland take to the streets of Dundee, and elsewhere in Scotland during summer 2016. Many unusual spots across the city were flooded with people taking #oorselfies and it was a particularly well-timed free activity trail during the school holidays.

Over 20,000 people then visited the weekend Send Off event in Slessor Gardens and the statues were then auctioned and raised a whopping £883,000 for the Archie Foundation to support the creation of two brand new children’s operating theatres within Tayside Children’s Hospital. (Event: 27 June-27 August 2016). Read more about the incredible success of the project and auction here. 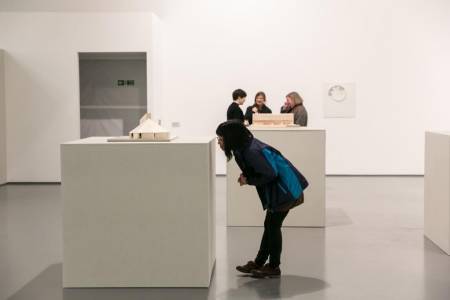 Featuring contemporary and archive photography, scale models and sculptures, the Grey Gardens exhibition at DCA explored how architects and artists have tried to harmonise their use of concrete with natural landscapes from the 1950s to the present day. The exhibition traces a line from Scottish modernist buildings by Morris and Steedman and Peter Womersley to the work of Italian architect Carlo Scarpa and the fantastical Mexican concrete garden Las Pozas, created by Edward James. Scottish town art also features, from Brian Miller’s work in Cumbernauld to David Harding’s creations for Glenrothes. Read more about Grey Gardens here. (Event: 27 February – 01 May 2016) 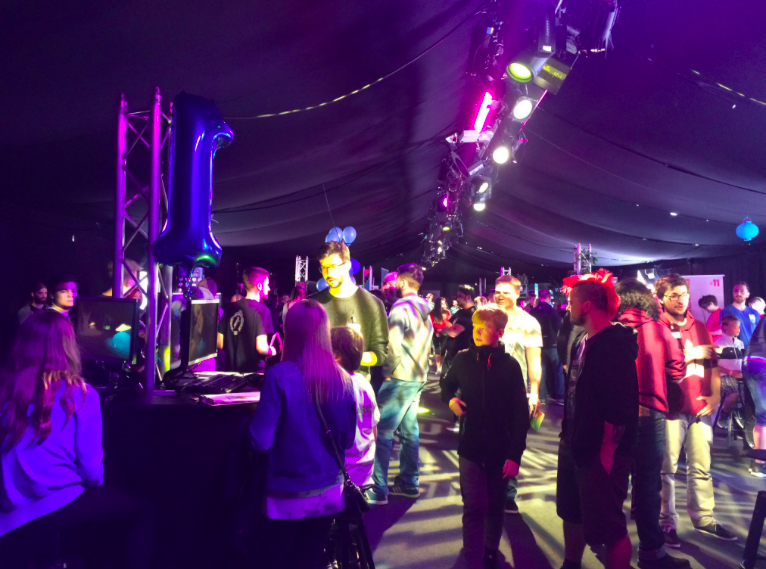 Dare Protoplay, the UK’s biggest Indie games festival returned to Caird Hall and City Square to showcase the games produced by student teams on Dare to be Digital. Teams who presented at the festival included students from Belgium, England, France, India, Scotland, the United States and Wales. The festival also showcased many other Indie games from local, national and international developers. (Event: 4 – 7 August 2016). 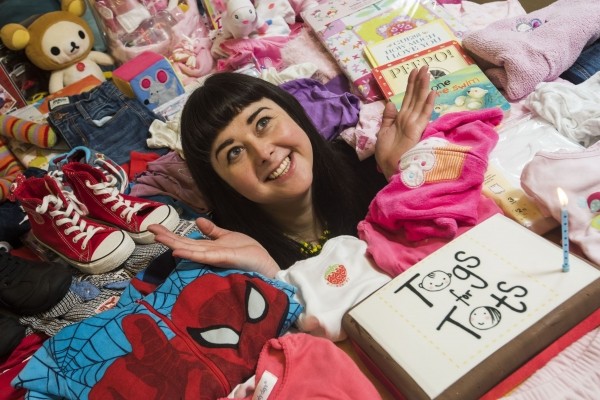 The second year of the Sheila Tenant Awards from Dundee West Church saw another £10,000 awarded to local groups who use design to solve a community need. The aim of this year’s awards were to encourage the use of design in relation to space, organisational change, food sharing, human well-being or energy efficiency. Award winners were announced at the launch event and included Hot Chocolate Trust, Lochee Music Group, Togs for Tots to Teens, and DOT (26 August 2016). Read more from our archive here. 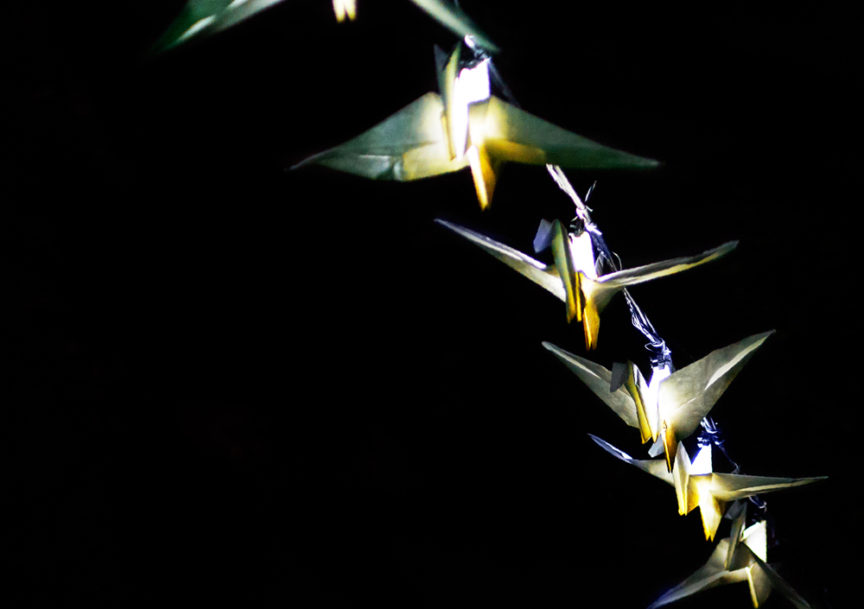 Composer and sonic and visual artist, Kathy Hinde brought her sound and light installation, Luminous Birds to Dundee’s Howff as part of a tour of Scotland which included Dumfires and Glasgow.

Designed and handcrafted by the Cryptic artist, the sight and sound installation lit up Dundee’s Howff  with origami birds floating over the historical burial ground. The innovative design of the mechanical birds (created from paper, plastic and metal) transformed their surroundings using synchronised lighting and spatialised sounds that created the effect of birds flying overhead. (Event: 12 September – 19 November 2016) 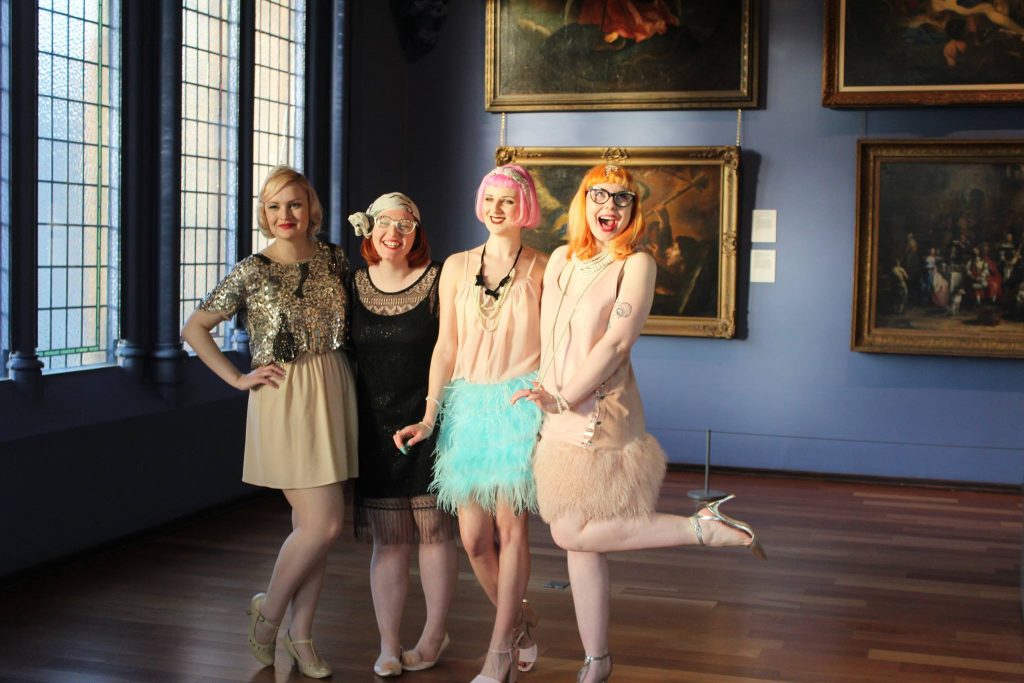 The McManus: Dundee’s Art Gallery and Museum took us back in time to the 20s and 30s of Dundee; a time of jazz, cinema, comic books and much more. With a focus on design and innovation from that era, highlights included the chance to see outstanding pieces from the McManus costume collection from the 1920s and 30s, ably assisted by fashion bloggers, Forever Yours Betty, Honeypop and Wardrobe Conversations. There was also an exploration of Dundee’s comic art from DC Thomson’s archives, through to contemporary comics from Dundee Comics Creative Space and Treehouse Comics. (Event: 14 May 2016) 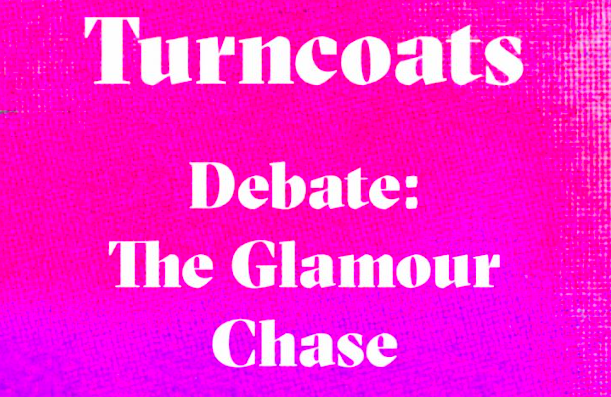 Architecture Fringe and Creative Dundee co-hosted Turncoats – a provocative, critical, yet friendly and playful architectural debate which framed things differently. Panellists included Christine Palmer, President of Dundee Institute of Architects; Siôn Parkinson, artist, singer and curator; Joanna Helfer, multi-disciplinary artist; and Graeme Hutton, Professor of Architecture and Associate Dean of Learning and Teaching at the University of Dundee. They debated the very nature of Dundee’s future and explored how a sustainable cultural scene can be encouraged beyond the current buzz about the city. (Event: 29 September 2016). Read more about this event from our archives here. 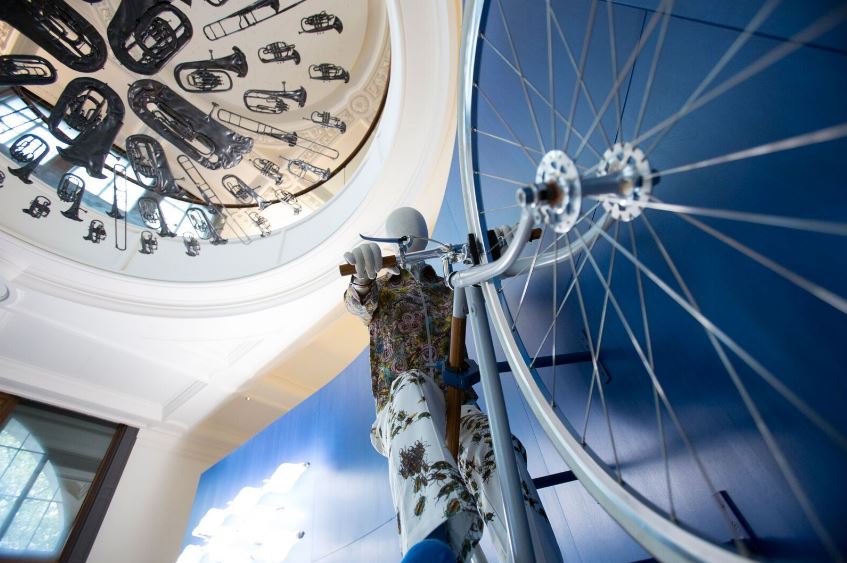 In partnership with Creative Dundee and Scottish Enterprise, V&A Museum of Design Dundee created Northern Lights, an exhibition to shine a light on nine exceptional designers who have chosen to stay in Scotland to build their careers by showcasing then in Victoria and Albert Museum during London Design Week 2016. 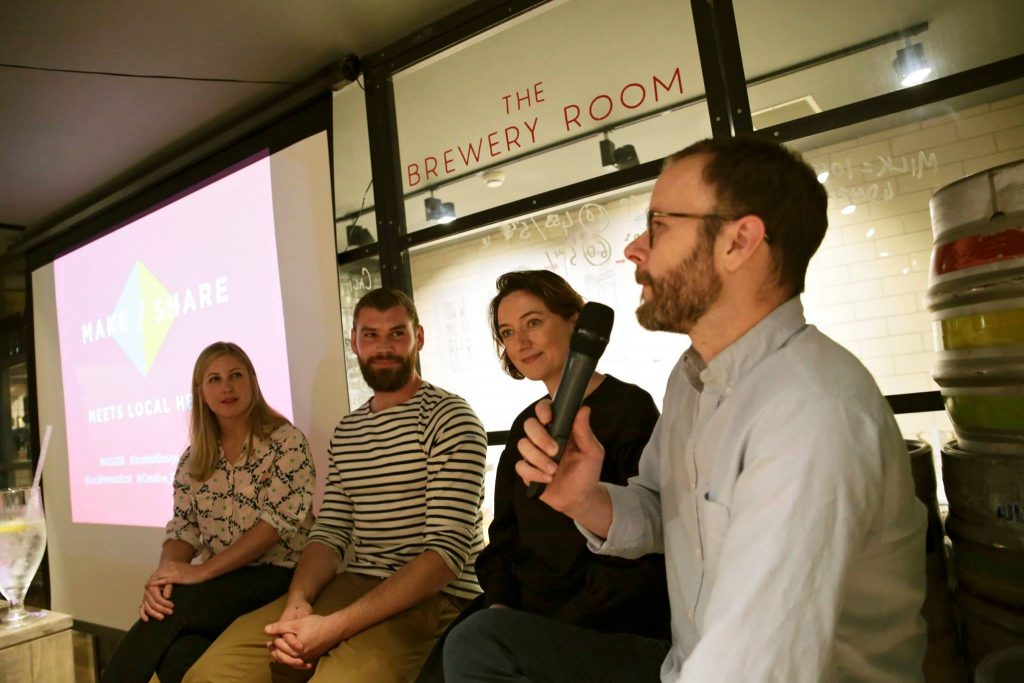 Local Heroes redefines contemporary Scottish design by bringing together Scotland’s leading designers in an exhibition of new commissions, exploring the notion of souvenir and the theme of travel. The exhibition held at Edinburgh Airport sees a footfall of over 1 million passengers during the month of August.

Creative Dundee and Creative Edinburgh co-produced two events in their respective cities, including Make/Share Meets Local Heroes. The focus of this event was what it means to be a contemporary designer in Scotland and explored what’s needed to push contemporary design in Scotland on an international platform. Speakers included Stacey Hunter – Director and Design Curator of Local Heroes, Pete Thomas of Tom Pigeon, Jennie Patterson of Patter PR, and Alec Farmer of Trakke. (Event: 12 October 2016). Read more about this event from our archives here.

Image: Son of The Sea Photography

A headline event for the Year of Innovation, Architecture and Design, Light Nights marked the end of Festival of Architecture 2016 and the beginning of Dundee’s Christmas celebrations. Following a theme of past, present and future, the city’s historic and contemporary architectural spaces became the focus for large-scale light installations, a torchlight procession, an architectural walking trail, art and design exhibitions, an audio visual installation and a night market. (Event: 18 November 2016). Read more from our archives here. 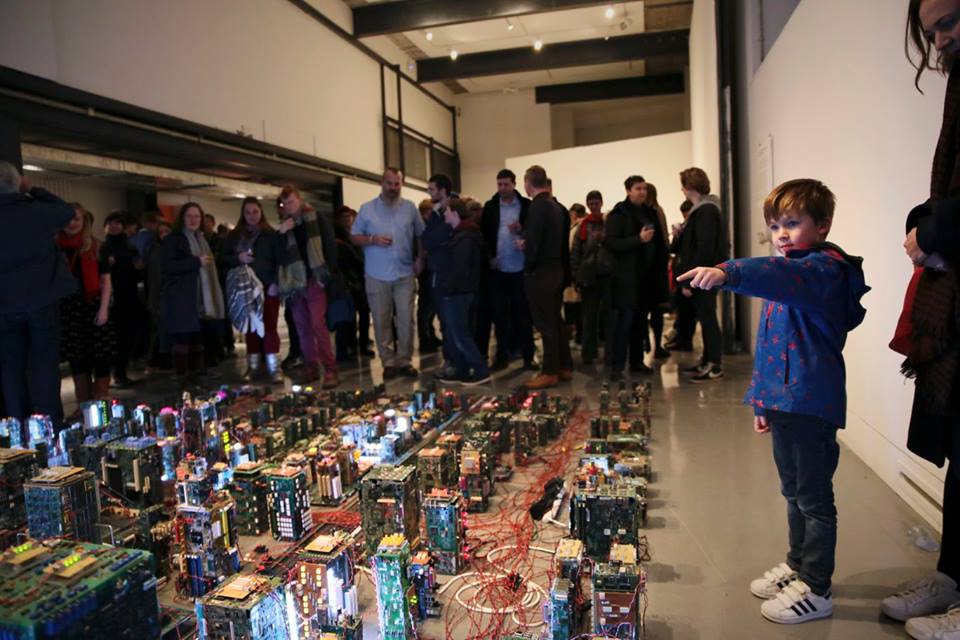 NEoN Digital Arts festival, now in its seventh year, organised exhibitions, workshops, talks, conferences, live performances and public discussions and showcased national and international digital art forms across the city of Dundee. NEoN brought a new media and digital art perspective to Scotland’s Year of Innovation, Architecture and Design, by considering these real and virtual environments. International artists explored and responded to the festival theme and considered alternative uses and futures for ‘The Spaces We’re In’, both virtually and materially. (Event: 9-13 November 2016). Read more from our archives here. 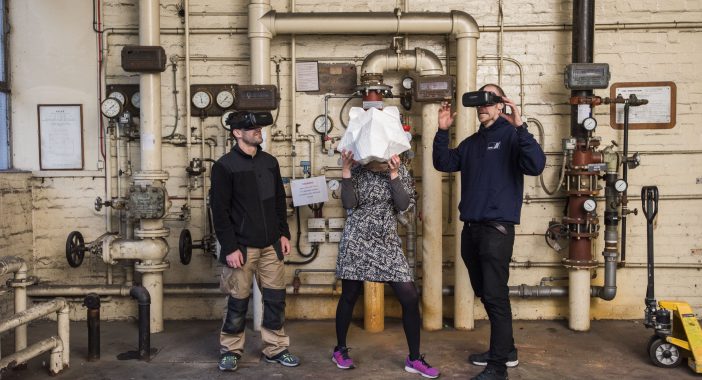 Following on from the grand finale during Light Nights, Festival of Architecture 2016 showcased a number of architecture exhibitions in West Ward Works, from an augmented reality trip around Scotland to architectural crazy golf. The event at West Ward Works showcased Lateral North’s Prospect, and the BBC’s Build It showcase and displays of student work. (Event: 19-27 November 2016). Read more from our archives here. 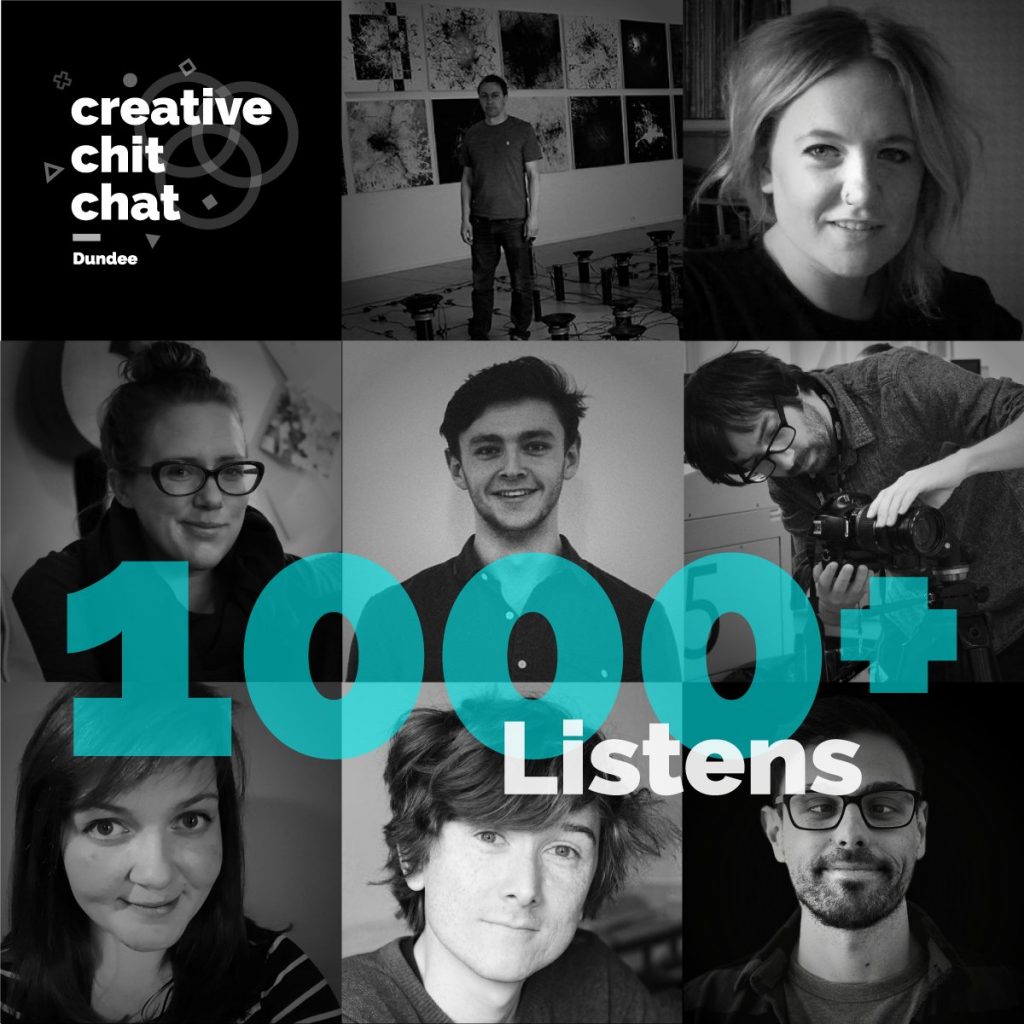 Although not an event as such, the launch of this new podcast series which picks the brains of creatives connected to Dundee is well worth a listen. Ryan McLeod of Slurpp is behind this welcome series, Creative Chit Chat, which aims to have open, relaxed and honest conversations with talented people. By exploring stories of their process, struggles and opinions of the city and its transformation, it’s hoped that Creative Chit Chat becomes a meaningful resource with insightful content. Read more about the project here and listen to the growing bank of podcasts here. 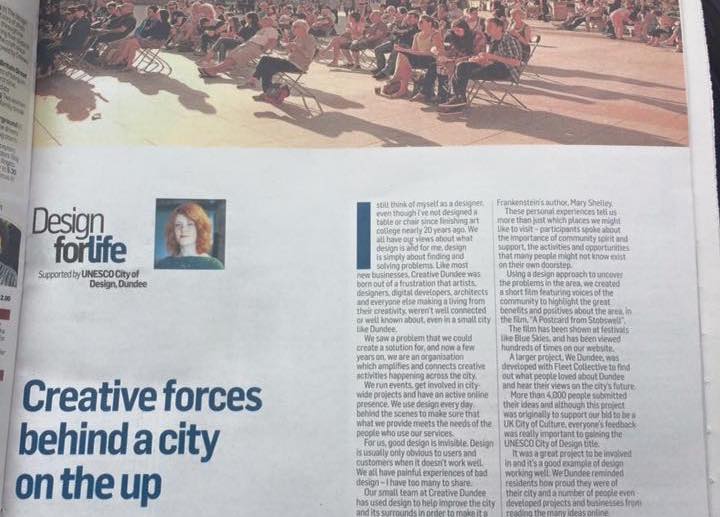 Thanks to a unique partnership between Dundee UNESCO City of Design and publishers, DC Thomson, each week The Courier’s Weekend magazine has a full spread about design in the city, called ‘Design for Life’.  As design and the creative sector aren’t particularly well covered by traditional media then this is a great initiative to help spread awareness of design. The team are always keen to hear great stories to potentially feature, if you have ideas get in touch with them.

Large scale events to look out for in 2017 include The McManus 150th anniversary year, University of Dundee’s 50th anniversary and Abertay University celebrating 20 years of video games at the University. Dundee Design Festival will be back for its second year from 25th – 29th May 2017. You can find a list of the city’s other cultural festivals here.