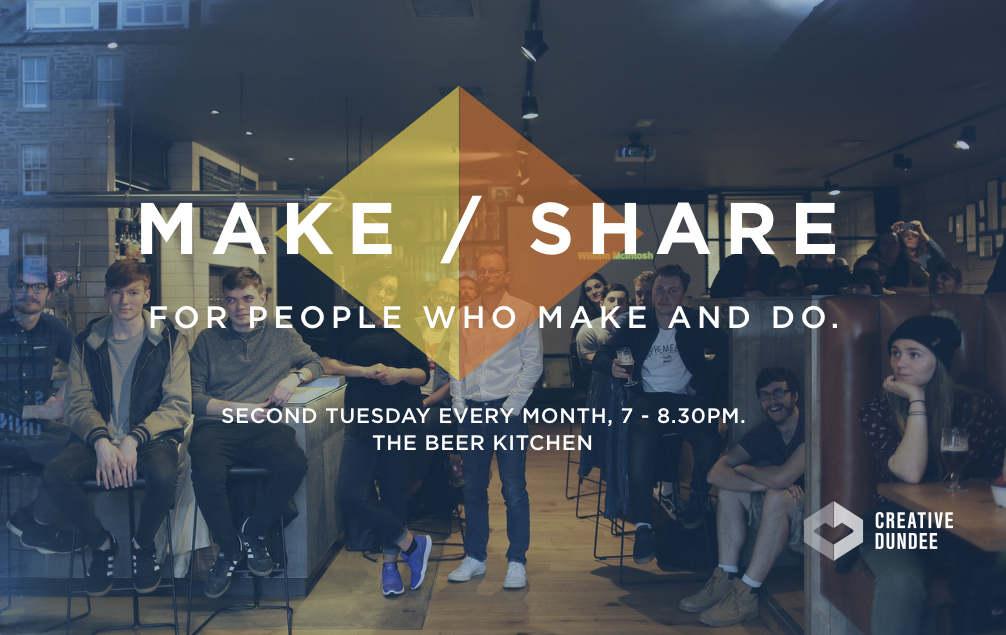 For people who make and do.

Make/Share is a free monthly event at The Beer Kitchen Dundee, from 7pm – 8.30pm, which brings people together to gain a behind the scenes insight into the work of people from a mix of creative, science, social and technology backgrounds.

Hear short informal talk from four people about how their project or product has evolved, changed and transformed, and how they experiment. Speakers explore the hows and the whys of what they do, but also what inspires them, what tools, techniques, expertise and collaborations they use or need. They also discuss their biggest challenges and how they overcame them.

After the talks there’s time for questions to the speakers, and for you to share your upcoming events with the group.

We’re pleased that The Beer Kitchen is our official sponsor venue for Make/Share and supports this with a free drink. Come along before the talks (from 5pm) and get a 10% off your food/drinks bill – just tell the staff you’re coming for Make/Share.

See previous speakers and watch a short film about the event below. See photos from previous nights here.

Why do we think this event is useful?

– Processes behind turning an idea into a reality aren’t discussed enough.
– It’s a chance to present work in progress and get constructive feedback.
– It helps inspire and create opportunities for collaboration to happen.

The great thing about Make/Share is that it’s not necessarily for people who call themselves designers or artists by trade. It was great to hear from people from different professional backgrounds and hear their point of view when they’re approaching issues in their day to day process. It just goes to show that no matter who we are or what we do, creative thinking can still be embedded into our work and lifestyles.

What I like most about the event is how inclusive it shows that the creative scene in Dundee is! I really like events like this as they can really put you at the heart of things and show you how much is going on.

Last week at #MakeShare in the @BeerKitchenDUN we set up a GoPro time-lapse! Thanks for everyone who made it (and brought their dog!). pic.twitter.com/3nEEiTwxrG

I had so much fun chatting at this month’s #makeshare https://t.co/0dblzDIB2Z

Ironically made myself very busy to get to tonight’s #makeshare. So glad I did though – the one social event where I can go along by myself and not feel alone, as there’s always a host of design friends! A gem of an event run by @Creative_Dundee!

WHOA! Best #MakeShare in ages! Great summer vibes… Thanks everyone who came and we’ll see you on June 12th! pic.twitter.com/n4NcI5KtTd

@designmeworld raises the importance of social time in design and research in Dundee #busyness –#MakeShare pic.twitter.com/i8GjfgHw0K

If you had all the time in the world, what would you do? Speakers at #MakeShare would sleep, make penguins, do more art yet gently remind you YOU CANNOT CHEAT DEATH

Dundee has a “Can we do this? Eh let’s do it and find out” attitude – William Mackintosh #MakeShare

A busy @theotherwork at #makeshare – talking about self employment and the definition of busy and how that differs from #hardworking let’s make 10-4 working day normal 😁 pic.twitter.com/14EhnFu7vD

A busy @theotherwork at #makeshare – talking about self employment and the definition of busy and how that differs from #hardworking let’s make 10-4 working day normal 😁 pic.twitter.com/14EhnFu7vD

“If you have the pieces to solve a problem, use them” – @AndrewAlexMac at tonight’s #MakeShare. Brilliant, honest talk about Dovetail, and the joy of all things 80s 👏🏼